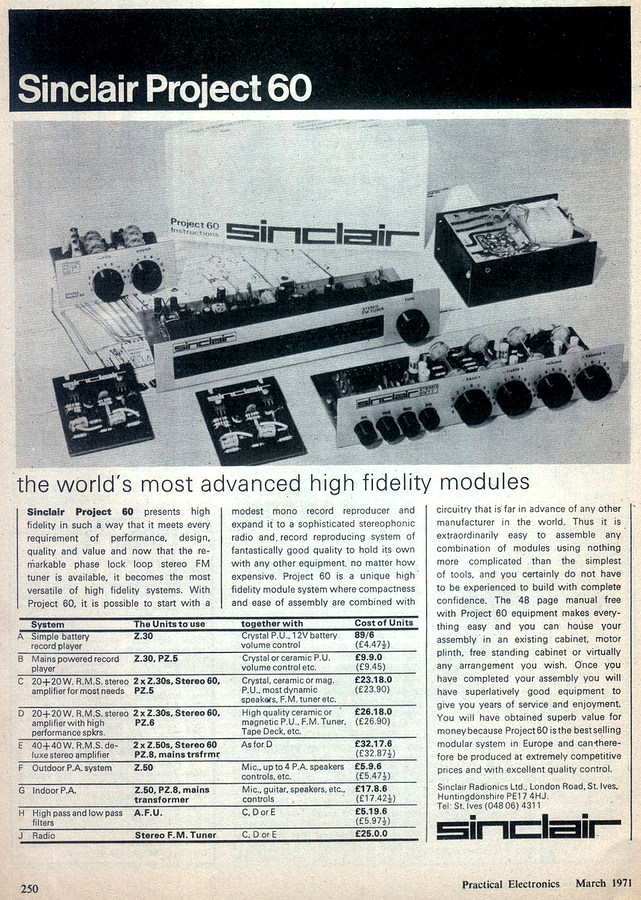 Here is a pair of adverts from the company, or at least the Sinclair Radionics part of it[1], that would go on to launch the ZX80, ZX81 and ZX Spectrum. Sinclair Radionics wasn't directly connected to Science of Cambridge, aka Sinclair Research, as that would be started afresh from a previously-dormant company after the part-nationalisation of Radionics, but it's still a fundamental part of the history of Sinclair's legacy.

Clive Sinclair left the last of the more than dozen schools he had attended in 1958 and opted not to go to university as he felt that "Most of them offered only electronic engineering and I had no desire for such a broadly-based course". Instead, armed with his self-taught interest in electronics and love of maths and English, he ended up doing four years[2] as a technical author, writing 17 books by 1962. Finding the work less than intellectually challenging, Sinclair branched out into actual products having realised that import controls were keeping out the Japanese products that people wanted to buy. However, backing for his proposed Germanium-alloy-transistor-based radio kit fell through and he had to resort to freelance writing to pay the bills. Sinclair Radionics would eventually be born in 1961 after Clive's commercial success in buying, grading, testing and re-selling Plessey transistors[3].

By the time of this advert, Sinclair was already well established in the home electronics market and here it's offering the Project 60 - a set of hi-fi components which proved to be quite popular - including the IC10 integrated amplifier, the Q16 "High Fidelity loudspeaker" and the Micromatic, apparently Britain's smallest radio and which was smaller than a box of matches. The adverts are also notable as they're on the cusp of when currency in the UK changed to decimal, from where 12 old pennies = 1 shilling and 20 shillings = 1 pound (a shilling became 5p, a Florin/two shillings became 10p and an old sixpence was worth 2.5p).

Even in 1971, Sinclair was well established with its "buy it as a kit and it's cheaper" approach to sales - the Micromatic was available for 49/6 in bits (49 shillings and 6 pence, or £2.47½ in post-decimal - about £45 in 2021 money) or 59/6 (£2.97½) ready-made. The other thing the advert shows is that Sinclair's logo seems to have remained unchanged throughout its entire corporate history.