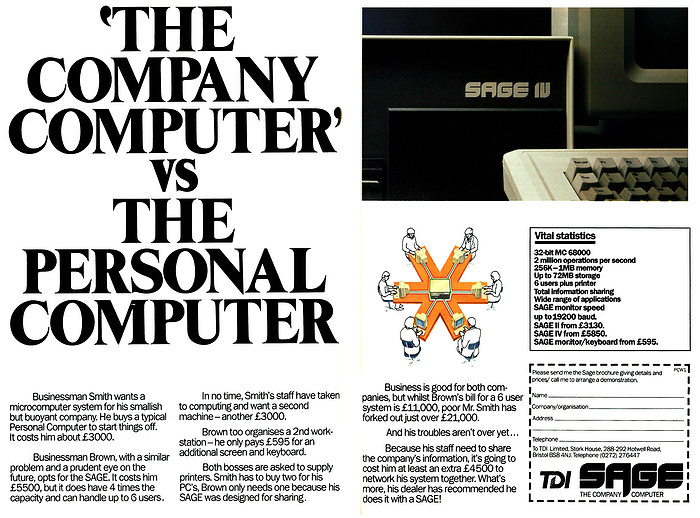 The Company Computer vs. the Personal Computer

1983 had been the year of Ethernet, with 3Com breaking cover as the first commercial manufacturer, with its network card appearing in January on the Altos micro. At the time it was considered a risky move[1], as the technology was somewhat unproven and fiercely expensive, retailing at about £700[2] (£2,410 in 2020) for an Ethernet interface card. So companies like Sage, with its various multi-user machines, could be seen as fighting something of a rearguard action agains the networking upstart, with the concept of a central "server" supporting multiple terminals going up against the eventually-dominant PC/Network concept of linked fully-featured machines sharing storage and printers. Sage wasn't alone, with other companies like ICL also sticking to the multi-user concept.

Sage's micros had already earned a reputation as "speed machines"[3] and in 1985 were in use at at least one major software house as a development platform. Denton Designs had formed out the remains of the collapse of infamous software company Imagine, with six of the mega-game-that-never-was Bandersnatch team setting up shop near Liverpool's Lime Street station. Denton's Dave Colclough explained the company's use of the Sage IV saying "It has a 68000 chip running at 8MHz - about eight times faster than a home micro. It's not just that it's faster, [but] if you're writing for more than one machine, you can use a cross-assembler to assemble the source code - one that has the same syntax for both machines - and then download that into the target". In the same year, Personal Computer World reported that the Sage II was still the fastest machine around, coming out as twice as fast as IBM's latest PC AT and seventeen times faster than TI's failed TI/99-4A, despite being two and a half years old[4].