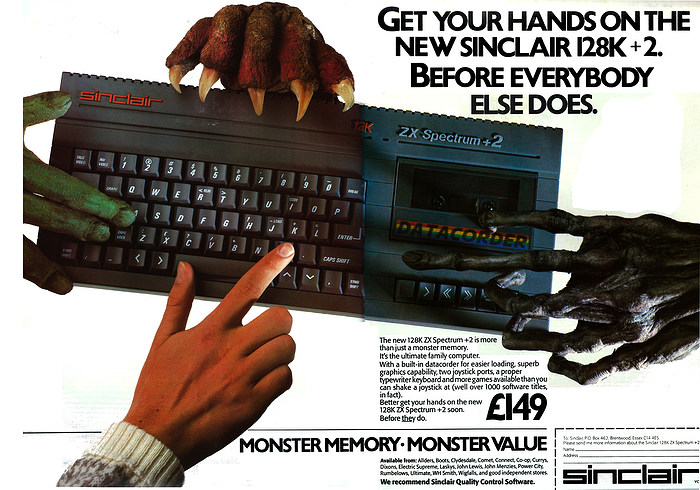 Get your hands on the new Sinclair 128K +2. Before everybody else does

Released under the management of Amstrad, which had bought Sinclair for its name and assets on April 7th 1986, the Plus 2 was launched without much fanfare in the August of the same year, before being officially shown at the Personal Computer World Show in September, where it was somewhat under the shadow of Amstrad's newer IBM-compatible PC. The change of form to an all-in-one unit was part of Amstrad's more rapid development of the Spectrum and was perhaps intended to stretch out the popularity of an 8-bit machine, which was already five years old by now, in to the 16- and 32-bit era of Commodore's Amiga and Atari's ST. The venerable Speccy was, in its favour, a fraction of the price of the new 32-bit machines, selling for £149 (about £420 in 2021), plus it had the advantage of an extensive software back-catalogue - the advert mentioning that there were some 1,000 software titles available.

The Plus 2 was actually released slightly earlier than expected, which was a feat that had never happened under Sinclair's ownership. Its design had been finalised in June 1986 with production starting shortly afterwards at Sinclair's long-standing manufacturing partner of Timex in Dundee, in time for a September release. Timex wasn't commenting on exactly how many machines it was contracted to build, but it was thought to be in the region of 100,000-150,000 Spectrums, along with a quantity of model 8256 printers - enough to employ 100-200 people for the rest of the year, according to Timex spokesman Jim Muir. It was also thought that Timex had pitched especially low to win the business, whilst Alan Sugar had been grumbling that EEC (European Economic Community, as the EU was known) duties made to too expensive to build micros in the UK, even though he "wanted to"[1]. 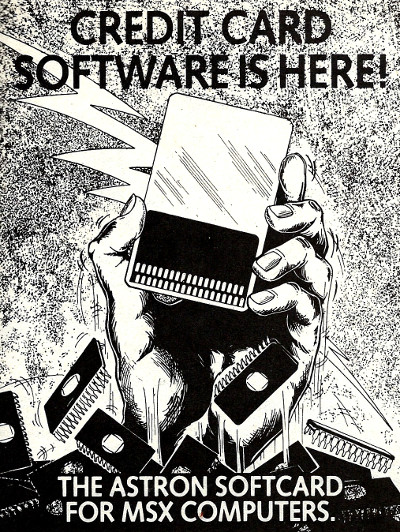 Advert for Astron cards, © Popular Computing Weekly, December 1985There weren't really that many changes between the Plus 2 and the original Spectrum, other than the case was now pure Amstrad - owing as it did much to the design of the latter's 464 and 664 all-in-ones - and it had a couple of joystick ports. Not included was the rumoured slot for the Astron "softcard" credit-card-sized software cards originally planned for the Pandora portable[2] or any technology from Sinclair's Loki advanced Spectrum project, not least because Amstrad was wanting to protect its own 464 and 6128 models by keeping the Spectrum firmly ring-fenced as a games machine[3]. Although Astron didn't make it to the Spectrum 2, the format did appear in the UK at the end of 1985 when UK company Electric Software signed a distribution deal with NDSL to sell a range of MSX software, together with the adapter to run it. Electric's Mike Hall said "The industry has for years been totally reliant on the audio cassette for data storage. Mechanically unreliable and the target for mass piracy, it needs replacing"[4]. Astron also managed a very brief appearance for the Commodore 64 and 128, when MicroPro launched its SuperScript word processor in the credit-card format in July 1986. The card version, plus adapter, was available for £100, with upgrades available to existing SuperScript users[5].

Just after Amstrad had bought Sinclair, negotiations began with several QL support companies which had banded together as the QL Suppliers' Association, for rights to the now-defunct QL technology, now owned by Amstrad. Amstrad was not expected to do anything with the machine itself, as it was rumoured to be working on its own 68000 machine, but micro company CST had already announced an upgrade to the QL called the Thor, which was initially based on QL motherboards along with repackaged versions of CST's own QL peripherals and a real IBM-style keyboard. As well as a the QL-a-like Thor, CST was also hoping to jump to the full 32-bit 68020 in due course. Prospero Software's Andrew Lucas said "the future of the QL is under negotiation between certain parties in Amstrad. It may well be that a successor to Amstrad will take on the rights to the QL. Certain persons are appearing with sufficiently large cheques". Meanwhile a spokesman for Amstrad, which had first-refusal on any future Sinclair machines as part of the buy-out[6], stated "Sinclair products are vested in Amstrad. If and when any developments vis à vis this particular product occur, we'll announce them"[7].

The Thor - referred to as "Son of QL" by Popular Computing Weekly - had been sub-contracted to the Stevenage-based CST as an official "QL Mark 2" project, but had been on and off several times over the year prior to the Amstrad take-over . The company had even been looking into that most vexed of Sinclair-related issues - Microdrives - as CST's David Oliver investigated data transfer of user data as well as software as a way of transferring existing Microdrive stuff into a 3½" format. Software was obviously subject to copyright and often came with added software protection, so straight-up copying was illegal, however the company as asking software houses for blanket permission to transfer programs across to the Thor's new 3½" floppies. It was thought that the Thor's built-in hardware "watermark" would help convince copyright owners that it wouldn't become a copying free-for-all.

There was further uncertainty around CST's machine, partly because it had decided to reject the obvious choice of Digital Research's Gem, as used on the Atari ST, in favour of rolling an in-house hardware-based multi-tasking operating system, but there was also the more prosaic issue of where it was going to get its motherboards from, given that Amstrad seemingly "preferred [to] export to Rockall [than] discount in Dixons". However, CST was quick to reassure that it had found a reliable source of components which was not subject to any right of veto by Amstrad. This was just as well as David Oliver pointed out that an un-named Eastern Bloc country had been "making noises" about an order for 20,000 units over five years - if nothing else, CST was being far more realistic about its potential sales volumes, aiming at a more realistic 1,000 units a month rather than the 500,000 that Sinclair had suggested for its original QL[8].

A month before, another erstwhile QL "upgrade" appeared on Italian PCB-manufacturer Sandy's stand at the ZX Microfair at the beginning of June. The machine came from QJump, formed by Tony Tebby, the writer of the QL's operating system, and later Jonathan Oakley who also worked on the QL. The QLT - denoting Quality - was said to be the machine that the QL should have been and, unlike the Thor (or the QL for that matter), featured a full 68000 processor, proper 3½" disk drive and real keyboard, as well as supporting exactly the same screen resolution as the original QL with a claim to be able to load all the QL's software. At the time that Popular Computing Weekly published the news about the compatible machine, with a mooted price of £575, Amstrad was sadly "not available to comment"[9]. Meanwhile, Tebby was suggesting that his machine was the only viable QL rescue plan, whilst he sought committment from other dealers to to take 50 of the new machines each, thus securing the £250,000 Tebby believed would be needed to save the QL from oblivion[10]. Only a month later, Tebby had "parted company" from his original backers, having failed to raised enough of the £250,000 he was after. Although Tebby was claiming that dealers were clamouring for stocks of the QL, it appeared that when asked to "put their money where their mouths are" they would baulk - an action that Tebby called "highly hypocritical". However at least one dealer suggested that there was a reticence to invest until Tebby's QDOS-compatible operating system was actually finished and working[11].

Of course, as is the way with these things, enthusiasm and optimism soon gave way to crushing reality as Amstrad rained on everyone's parade when it declared "Amstrad has all the intellectual property rights to the QL" and that "CST will have to go to Amstrad for permission to use these critical components [the motherboards] and that permission will not be granted, so they have a problem". This certainly put the dampers on CST's belief that if could get circuit boards for its Thor from one of Sinclair's former suppliers, and made somewhat moot a rumour that Samsung had rights to manufacture the motherboards and was willing to restart production for anyone willing to commit to 8,000 boards a month, even though this was well out of CST's league, where it was aiming at a more modest 1,000 a month. The rumour was not without some foundation, as some of the details around exactly which of Sinclair's rights Amstrad had bought were a bit sketchy. As well as rights to the Portugese market, and possibly (although no-one seemed too sure) Mexico, Timex had arranged to sell 800,000 Sinclair machines to Poland, which by default seemed to give it rights to the entire Eastern Bloc market[12].