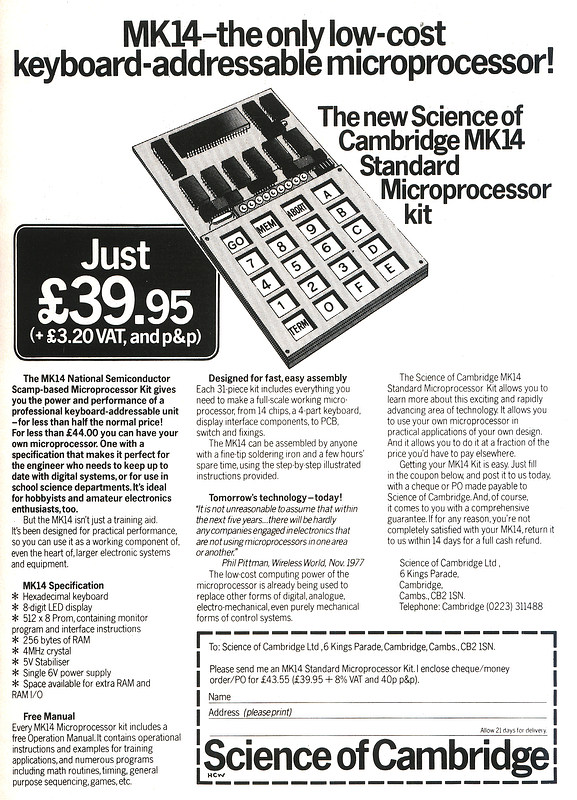 "MK14 - the only low-cost keyboard-addressable microprocessor!"

What would become the home computing part of the Sinclair empire was at this time operating under the moniker of Science of Cambridge, whilst the Sinclair name itself was still attached to the now-part-nationalised Sinclair Radionics, twenty miles up the road from Cambridge in St. Ives. This advert, from two years before the launch of the ZX80, is for Science of Cambridge's MK14 microprocessor which in true Sinclair form was only available as a 31-piece kit and which looked like a big calculator which is missing its cover, which is not surprising at is was said to have been originally made largely from scavenged calculator parts. It's similar in principal to other microprocessor boards of the era, like Bywood's Scrumpi board - both used National Semiconductor SC/MP "Scamp" as their CPU - although Bywood's first board predated Sinclair's by about a year. The MK14 had 256 bytes of RAM and retailed for £43.55 - about £260 in 2020 terms, making it exceptionally cheap compared to anything else on the market at the time.

The ad says: "Tomorrow's technology - today!" and "It's not unreasonable to assume that within the next five years ... there will be hardly any companies engaged in electronics that are not using microprocessors". How true.

The MK14 was reviewed in April 1978's Personal Computer World by a young Nick Toop. Toop, who was "studying black holes" at Cambridge University, was writing as "an independent consumer" and reported that he "was very impressed by this kit. Its low cost and versatile-but-economic design are very pleasing. I am sure that it will have great success"[1]. Toop soon joined Sinclair to work on the MK14 and then moved to Acorn to work on its Atom[2]. He then moved to Elan to design some of the custom chips for the ill-fated Enterprise/Elan micro of 1984/85[3].

Science of Cambridge, at 4a Market Hill in the centre of Cambridge, had been set up on behalf of Clive Sinclair by Chris Curry, who had worked for Sinclair for thirteen years - from hi-fi to calculators - and who would later co-found Acorn. Curry was the first person there, and at first did everything involved with shipping SoC's first product - a wrist calculator, which was "a ghastly things" according to Curry. This included "placing the ads, packing kits, taking them to the post office, mending some of them, answering technical queries, absolutely everything". By the time, the MK14 came out, the company was up to "about five or six people". Curry continued in his 1982 interview with Practical Computing "[The MK14] was quite a successful computer. The next step was obviously a version that ran Basic instead of just machine code. That was where our ways separated, because Clive didn't want to do that and I did. So I set up Acorn Computing with Hermann Hauser"[4].