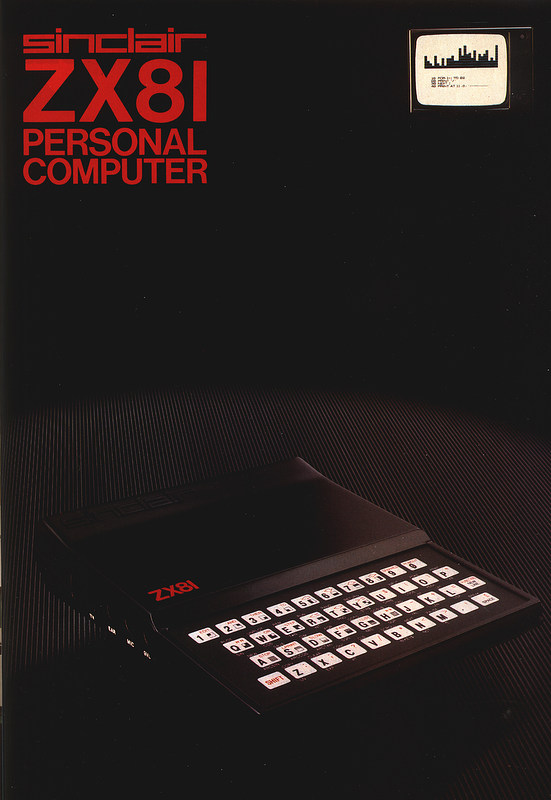 This advert was quite an impressive 4-page spread (only the first three are shown here) which featured in several computer magazines and was used to advertise the ZX81, which launched in the UK in March 1981. The ZX81 was a successful computer and sold over 1.5 million units, despite its awkward membrane keyboard and only 1K RAM. It predated the VIC-20 in the UK, and Sinclair used similar marketing methods to Commodore, such as using high-street retailers rather than specialist computer outlets to sell them. It retailed for only £70 - around £260 in 2020 terms - way below anything else on the market. Even after the ZX82, otherwise known as the Spectrum, launched in the summer of 1982, the much-cheaper ZX81 continued to sell. This was just as well as by then it was estimated that around 180 companies had been established to service ZX81 with software, hardware and peripherals[1]. As reported in June 1982's Your Computer, 350,000 ZX81s had been sold by the time the Spectrum arrived on the scene, but Sinclair also appeared to take the view that the ZX81 would continue to shift units - even as the Spectrum was launched Sinclair announced a new range of software for the '81 comprising 26 cassette titles, of which 19 had been developed by Government-backed ICL and the rest had been written by Psion[2]. Psion was the company that later worked with Sinclair on software for the QL (the ZX83), went on to produce the famous Organiser series and which would later develop the Epoc operating system, which become Symbian - the most popular phone OS on the planet until Android came along.

The £50 (£180 in 2020) printer in the advert used thermal paper, and the summer of 1983 was said to have taken its toll, as it was discovered that the paper was affected by high humidity, rather than the more expected exposure to sunlight. When questioned, a Sinclair spokesperson suggested that "the paper should be used within 12 months of purchase. I would advise users to [photo]copy printouts which may be required at a later date"[3]. Personal Computer News's correspondent helpfully suggested that it would be "a good idea to stay out of the greenhouse when you're looking for somewhere to store [ZX paper]".

The Your Computer "flexidisc" floppy 45rpm record, featuring Galactic Hitch-Hiker for the ZX81Later on, in the summer on 1982, there were some radical developments in the field of software distribution for the ZX81, as the computer magazine Your Computer started shipping software on actual flexible records (sometimes called "flexidiscs" or Flexisoft) - the same format in which free floppy 45rpm 7" singles were sometimes given away on the front cover of music magazines. A certain amount of end-user research was required in order to get the right balance of noise-suppression and frequency, but the ZX81 was especially easy as it used regular human-audible tones to store program data - the acoustics of the ZX81's cassette interface were such that it was well known that cheaper tape recorders - those with poor bass and treble - worked best[4]. The Commodore PET had also been suggested as a target as it was one of the most popular micros around at the time, but it was originally thought that it simply wouldn't work as the PET used a more complicated, if more reliable, form of data encoding. However, that issue seems to have been overcome as the record (right) includes a VIC-20 game. The first software shipped with June 1982's issue was Othello - the recipient would literally connect their record player to the tape socket on the '81, stick the needle on the record and type "load" on their computer[5]. There's no record of how long the experiment lasted, although there doesn't seem to be any mention of follow-ups in later editions.

In the April of 1982 rumours were floating around that Clive Sinclair was intending to sell some of the shares in Sinclair by the end of the year. At the time, Clive owned 95% of Sinclair Research, with a friend of his making up the remaining 5%. Clive's long-running electric car project was one of the reasons that the company was looking for aditional funding, with a spokesman saying "There's likely to be a share placement of about 10% of the company to fund research and development projects including the electric vehicle without draining off too much money from the computer side of the business"[6].