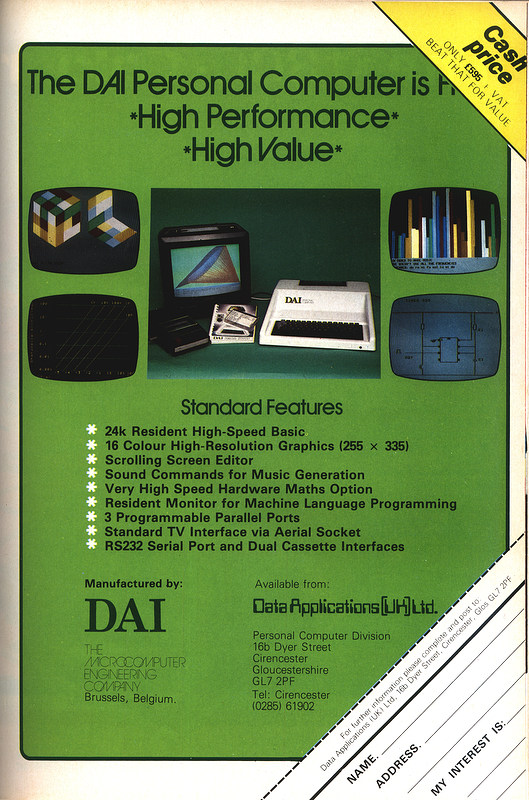 When Texas Instruments was developing its TI-99/2 and TI-99/4 computers, it knew that producing a PAL/SECAM version would be a hassle. Indeed, when the TI-99/4 finally launched in the UK it still couldn't use native televisions and required receiver modifications or a special TV that could handle both PAL and the US' NTSC picture format. So, according to the rumours, it commissioned Belgian company Data Applications International to build a computer with sound and colour graphics based on TI's chips. By the time it was working though, TI had changed its mind and started selling the TI 99/4 bundled with a US monitor, "solving" the video output problem. This left DAI to sell the machine into the UK from the end of 1980, but at least it hadn't had to fund its development[1].

The advert shows that it had 24K ROM basic - quite a large amount in the day - and a 256x335 graphics display, plus 3 parallel ports. In 1980, the 12K model retailed for £595 plus VAT, or about £2,940 in 2020 whilst the 48K model was a whopping £795 plus VAT - £3,920 in 2020. Personal Computer World's review however was quite positive, although it pointed out that seemingly in common with most other European micros of the day the DAI had nice system software but no applications packages available for it. Sue Eisenbach continued "I found the DAI personal computer an entertaining machine to play with. With its range of add-on boards, its potential as a computer for process control is good. Both its colour graphics and sound capabilities are impressive and would make an interesting proposition for someone who wanted to produce and record computer music".