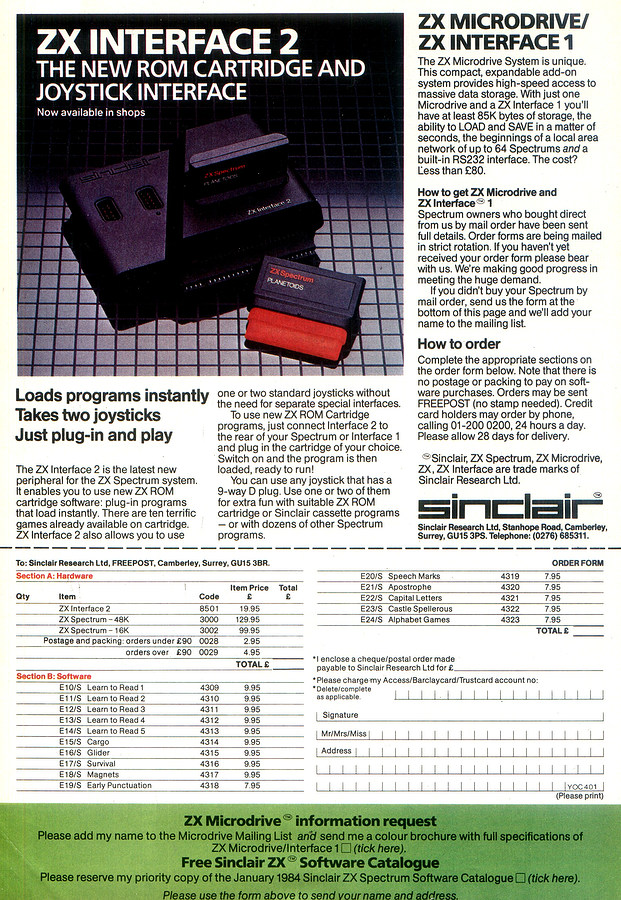 The Interface 2 was an update to the existing Interface 1 (formerly known as the ZX Expansion Module[1]), a device required in tandem with the concurrently-launched Microdrive, which was finally available (very late - it was originally intended for release in 1982) around August of 1983. Interface 2 built upon the original by adding a ROM cartridge and a joystick interface, but both provided an RS-232 interface, which allowed Spectrums to be networked with up to 63 other machines.

Upon their release, Microdrives were received with some interest. Personal Computer News wrote that "the Microdrives have been worth the wait. The system uses not a disk, but an endless tape cartridge about the size of a ROM chip. The ultra-thin tape inside is driven over a magnetic head at great speed, transferring data to the computer many times faster than a cassette tape"[2]. The tape revelation was not too much of a surprise, as Popular Computing Weekly had already reported, somewhat sniffily in the summer of 1982, that the Microdrive might not be "a disc system at all, but some form of tape storage method"[3].

A single Microdrive cost £49.95, with the required Interface 2 bundled for an extra £29.95 (a total of £79.90, or £270 in 2021 money), with Sinclair hoping to limit demand for the drives by setting the cost of individual tapes quite high, at £4.95 (£17). On the Spectrum, a 48K program was said to load in as little as 3.5 seconds, but when the drives were integrated in to the later QL, speed and performance seemed to plummet with a similar file taking around 40 seconds[4]. Microdrives ended up becomming something of a Bête Noir for Sinclair and contributed to the relative failure of the QL, and thus to Sinclair's financial troubles which saw it purchased by Amstrad in 1986. This was in part because the "disks" were hard for software companies to replicate, which meant not much software was made available[5] and because repeated use of disks caused more and more fragmentation of files, which - because the disks were serial in nature - meant that files got slower and slower to load.

Hints of this financial turmoil had first been observed with the early-1984 publication of Sinclair's half-year results, covering the period up to October 1983. Sinclair had been optimistic about 1983 following the massive growth in 1982 - the company announced that its 1-millionth Spectrum had rolled off the Timex production line on the 9th December 1983 and sales were running at an average of 50,000 a month[6] - but the figures showed that this growth was not being repeated. Even though sales had risen by £14 million, an increase of 60%, costs rose by 85% so profits were up by only £600,000 to £4.4 million (about £13 million in 2021). Reasons for this included the micro price wars, started by Commodore when it dropped the price of the VIC-20 forcing everyone else to drop to keep up, as well as industrial-relations problems at the Dundee factory where Sinclair's computers were built. City investors, which in 1983 had invested £13.6 million in return for 10% of Sinclair, were said to have received a nasty shock, and it was even suggested that Sinclair's stock market flotation might be delayed[7].

Elsewhere, Sinclair was continuing with its sometimes scattergun approach to products when it told the BBC and the Independent Broadcasting Authorty (IBA), seemingly out of nowhere, that it was planning to produce a satellite receiver for under £100 - no doubt the same £99 magic number which was also the price of the company's rumoured but never launched mobile phone[8]. The price of a whisker under £100 was to include the satellite dish as well as the decoding equipment and was roughly a fifth of previous competitor estimates. It was thought that Sinclair's announcement could even influence a joint working party which was at the time deciding "the future of satellite broadcasting, seemingly in favour of direct-broadcast television" - the year before, European broadcasting companies had failed to agree on common transmission standards, causing the BBC to shelve its "ambitious" plans[9]. Sinclair's announcement wasn't entirely without merit, as a DTI initiative called Project Universe had been running for the past three years. This seemed to be very much in the vein of an early internet, as it was specifically looking at using satellites to link together sophisticated industrial, academic and government local-area networks with high-speed interconnections[10]. It's possible that Sinclair could have seen his cheap satellite decoders as a way in to this potentially lucrative market, although at the time of the announcement Project Universe was running low on funds and needed another £10 million if it was to develop a commercial system.