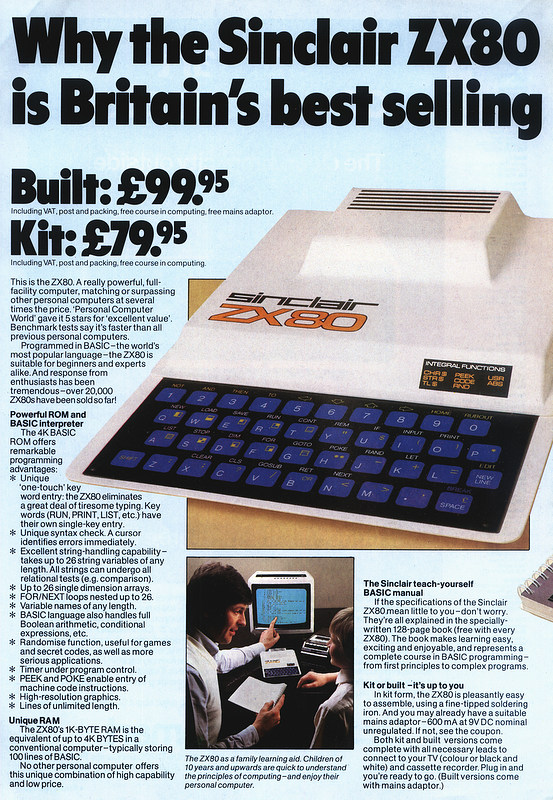 "Why the Sinclair ZX80 is Britain's best selling computer"

Just before the release of the ZX81 comes this advert for the ZX80. Somewhat amusingly it claims to be "a really powerful, full-facility computer", even though the same advert also says that a 16K RAM pack gives it "16 times more memory". Less fancifully, it was indeed likely to have been Britain's best-selling computer, as it was reported in May 1981's Personal Computer World that sales of the '80 were about to exceed those of the Commodore PET, which had sold about 45,000 units by April 1981[1], although the PET had taken much longer to get to that figure, having been available in the UK since 1978. For a latter-day programmer, there's more amusement with features like "Excellent string-handling capability - takes up to 26 string variables of any length" and "up to 26 single-dimension arrays". Woo. It was definitely cheap though - at around £100 it was only half the price of the VIC-20, or about £410 in 2020 money.

Personal Computer World had been running a small competition in order to discover who had written the Basic for the ZX80, as Clive Sinclair was keeping quiet. The matter was resolved following a phone call to the magazine from none other than Crispin Sinclair, who dobbed his father in for the £5 prize to reveal that the author was John Grant. When asked by David Tebbutt if dad knew that the ten-year-old Crispin was calling, he replied "oh well, no - I thought I'd ring to claim the fiver before he did"[2]. 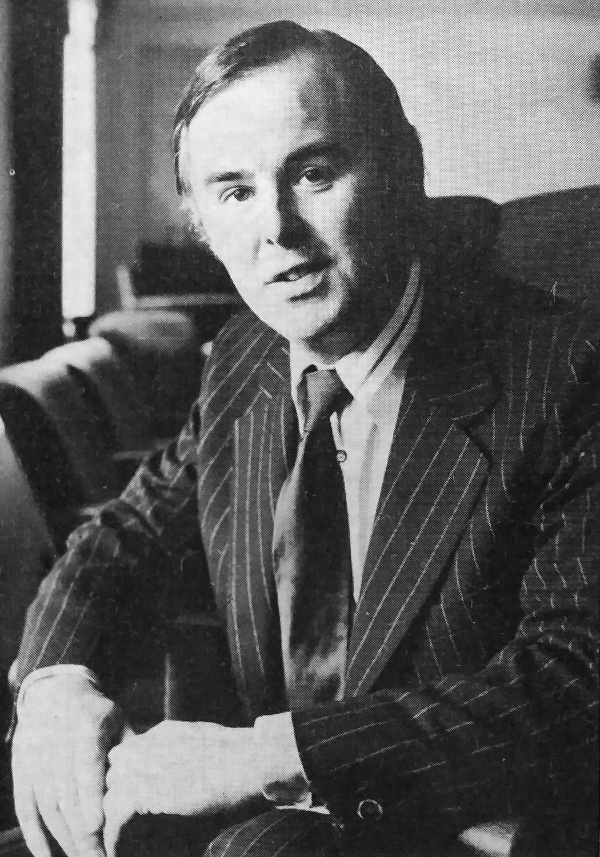 Kerr Borland, © Your Computer February 1982Almost before the ZX80 had launched, it had been copied as the MicroAce by Product Launch, fronted by Kerr Borland, formerly of Nascom, and was being sold through Barnet-based Comp Shop. Copying the '80 was fairly straightforward as the ZX80 used off-the-shelf chips, so the only thing that had to done, apart from give the MicroAce twice the memory and a different case, was reproduce the ROM BASIC. Although Sinclair had already got an Ex Parte injunction against Comp Shop and Product Launch to prevent marketing and promotion[3], the "Cambridge Cosa Nostra", as Sinclair referred to himself, struck a deal with the "Barnet Mafia", which Comp Shop had become known as, to give the latter the US kit market in return for around £15,000 cash (about £62,800) from Comp Shop's Chris Cary. Cary had form in copying machines as he was also behind the "nearly copy" of Ohio's SuperBoard, the UK 101. Sinclair said of the agreement that "we mustn't waste time arguing in the courts - this product is nine months' wonder and we have to use every month". When the ZX81 was released in the following year, Sinclair had reduced the chip count down to only four, primarily by using a massive Uncommited Logic Array chip, made by Ferranti, to handle most of the functionality. This made the ZX81 much harder to copy[4].

Kerr Borland ranked Comp Shop's Cary as one of two great figures of 1970s computing in the UK - the other being Commodore's Kit Spencer - when in an interview for Your Computer in February 1982, he suggested that Cary was a "great character" in the trader market. He continued "People would complain about his discounting, but you have to remember that he would place orders and accepted deliveries that added up to more than all the other distributors put together". Suggesting that the era was like some wild-west gold rush, Borland also said of Cary that "he had them all discounting - people who would never have dreamt of dropping their prices were forced to discount just to survive. Some of the things they were giving away were unbelievable. They would be making £25 on the product and giving away £21 power supplies to sell it".

Borland also believed that the ZX80's successor - the ZX81 - should have been the machine that became the BBC Micro, as its price - a quarter what the Acorn Proton ended up retailing for - would have enabled hundreds of thousand more people to get involved. "The BBC Micro was designed by committee - I know because I was on it at one point. It reached the stage where there were 24 people sitting around a table and you can't design a product like that"[5].