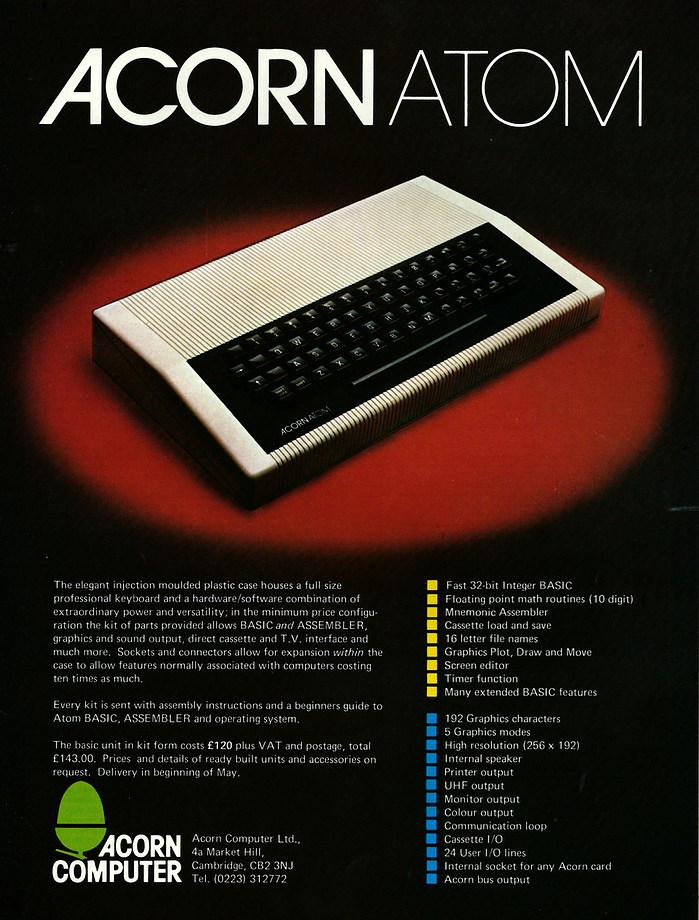 This was Acorn's first advert for its first full consumer-oriented micro - the Acorn Atom. The Atom was a 6502-based machine and was available primarily in kit form. It was a natural progression from the 6502-based Acorn's "System 1", which had been launched in January 1978, as it contained slots for the same Acorn expansion cards that were available for the earlier machine. Even the Atom's Basic was only slightly modified from the fast, control-oriented, Basic that went into the System 1. However, the Atom was aimed at the home market rather than hobbyists with its injection-moulded case and real keyboard. 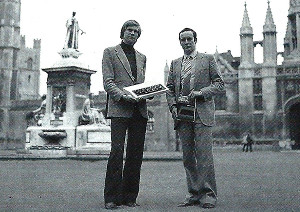 Hermann Hauser and Chris Curry pause for a photo in 1980 with their Atom on the lawn in King's College Great Court, Cambridge. © Acorn User,August 1984The entry-level model was available for £143, or around £700 in 2020 and was sold until 1983 when it was effectively replaced by the Acorn Electron. The £400 (£1,490) Proton, otherwise known as the BBC Micro and which came out (late) at the beginning of 1982, was in a different category entirely.

The Atom's BASIC was unusual in that it would run in-place Assembly Language, using regular 6502 mnemonics. It had been written by Roger (later Sophie) Wilson who it was said "had a 6502 assembler in his head and can at any stage in the program apparently recall what is in the various registers, stack pointers and status flags; he can do amazing short cuts"[1].

In what would be a common theme for the entire microcomputer industry for the next few years, the Atom was beset with early delivery delays, prompting many letters to Personal Computer World. This generated a response from none other than Chris Curry, Director of Acorn who responded "Our original production plan was delayed by nearly six weeks because of last-minute problems with the case moulding and this caused a backlog of orders which is taking some time to overcome. However, we are now despatching in sufficient quantities to allow an order placed at the beginning of October [1980] to be delivered within six weeks, halfway through October within four weeks and halfway through November delivery should be ex-stock."[2].

The name Acorn had been chosen because the company philosophy was that each machine's design should take into account future developments, but also that each new product should have some compatibility with its predecessors, and so as Chris Curry said "it was going to be an expanding and growth-oriented system". Curry and co-founder Hermann Hauser had met whilst Curry was still working at Clive Sinclair's Science of Cambridge, where he had been involved with the MK14 development computer. The Cambridge connection was important to Curry, and he had chosen to remain in the town "because the university processor group, or its computer lab, has maintained Cambridge as one of the leading universities in computer science. So there is a good supply of bright people to go into the industry". Curry continued in his 1982 interview for Practical Computing "One of our directors is a lecturer at the computer lab, and he is on the watch for good people about to leave that might want to work for us. And of course an awful lot of hobbyists come out with software that they have written in their spare time to sell us, and we make contact that way. Cambridge is a fairly small town; people know each other. There are lots of small software houses, all closely interlinked with the university, and we talk to each other".

Whilst the Atom was Acorn's first consumer microcomputer, the company was still intending to support it even though it launched the Proton (BBC Micro) at the end of 1981 and the Electron in 1982, as its continuity philosophy meant that whilst the company looked ahead, it did not lightly throw away tried and tested systems (a philosophy that perhaps would come back to haunt it as it hung on to the Proton for years without significant change). The Atom did have a particular usefulness as that, unlike its later micros, which made use of ULAs - Uncommitted Logic Arrays, a sort-of hard-wired custom-programmable chip - which were hard to copy but also impossible to tinker with, the Atom was "conventionally" built. As Curry said "The beauty of the Atom is that you can get inside it, you can tack bits on to it, you can use it as part of another, larger, piece of kit". In other words "The Atom is still a fine machine for tampering with hardware"[3].