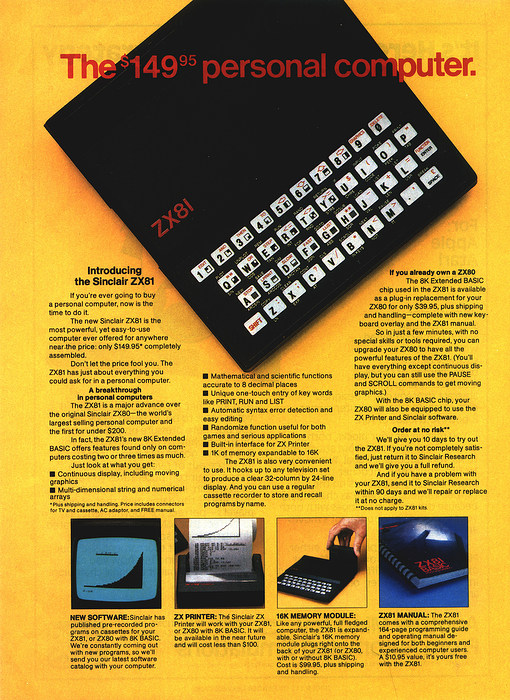 Before Sinclair cut a deal with US watch-manufacturer Timex to distributes the ZX81 in the US as the Timex Sinclair 1000 or 1500, it was available in its original "Sinclair ZX81" form, as this US advert shows. It appeared to do well in the US market, and by the time that Timex - which was already building the machine in Dundee at the rate of 60,000 per month - was also building it in the US, some 60-70% of all ZX81 production was going to export, primarily to the US, France and West Germany, all of which netted Sinclair the company a cool £27 million per year (around £100 million in 2020)[1].

The machine was also available in true Sinclair style as a kit - it was still not uncommon to purchase your computers in bits in order to save money ($50 in this case) and to get your own soldering iron out to stick it together. At least Sinclair made it simple enough as its ability to sell computers so cheaply was based on the knack of getting the number of components down to the bare minimum - the ZX81 only had four chips on it compared to the 21 of the ZX80, with relatively few additional components - the advert is probably fairly faithfully showing the actual components from the kit. The kit-form ZX81 retailed for $100, which is about £240 in 2020 terms. This was nearly a third the price of one of its competitors, launched in the same year - the Commodore VIC-20.

As well as reducing the chip count and sourcing from well-known sweat-shops of the day like Honduras, El Salvador and the Philippines to keep the cost down, Sinclair explained the success of the '80 and '81 coming from the fact that the company looked beyond the hobbyist, who was considered as a "dead cert", to the "man in the street", a market which few would have predicted that - with the right sort of package at the right price, and enough of a manual to actually learn from - could be tempted into an impulse mail-order purchase. The company's experience of decades of operating by mail order paid off, and soon the company was repeating its strategy in France, West Germany, Australia and perhaps the least-likely location - Japan. The little ZX81 in particular also seemed to spawn a legion of dedicated fans and customisers, many of whom were buiding and selling add-on keyboards, better character generators and colour cards. There was even apparently a hard disk attachment, which Uncle Clive suggested might be "quite overgilding the lily"[2].