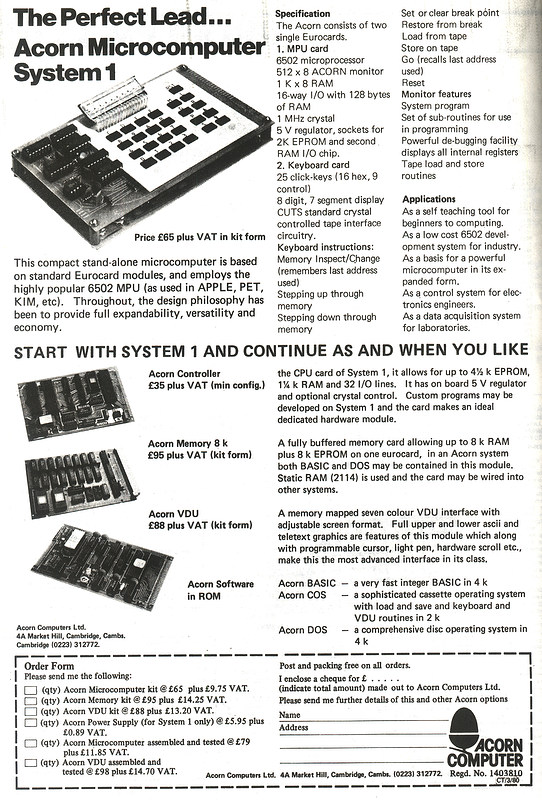 Acorn's "System 1" (formerly known just as the Acorn Microcomputer) was launched in March 1979 and appears here in an early-1980 advert selling for £75 in kit form (about £370 in 2021 money), broadly comparable to the cost of the Sinclair MK14 of 1978. It was designed by the legendary Sophie Wilson (who went on, via the BBC Micro, to design the first ARM instruction set - the chip that has now sold billions and is in more than 90% of all smartphones ever made) and would also be similar in function to MOS Technology's KIM-1, as both were 6502 based and were intended as "self-teaching tools for beginners, a low-cost 6502 development platform, a control system or a lab data-acquisition system". This board was integer-only, which might make it sound like something a bit retro but is something that is still used by some modern embedded processors. Being integer-only helped to make it run faster, albeit at the expense of not being able to do floating-point arithmetic.

One particularly interesting commercial use of the System 1 would come in 1982 with Systems Control's "Smart Arm" robotic arm, which used it as its controller or "CPU". For the breakthrough price of £430 (about £1,600 in 2021 money) for the educational Model 4E version, you got a robotic arm that had a reach of 200mm and could lift 50 grammes. At the other end of the scale, £2,560 (£9,580) bought you the industrial 61 model, which could lift 1.5kg and reach out a metre. The whole system was designed to be controlled by an Atom[1], the next machine that Acorn would produce after a few more revisions of the System 1, after which Acorn went on to produce the Proton, otherwise known as the BBC Micro. More information on the System 1 can be found here. The BBC Micro end up getting a robotic arm, thanks to a product launched for it by Droid Factory, the Abingdon-based company run by Tony Dyson - the man who made R2-D2 for the film Star Wars. The robot arm, based on an industrial version but using servo motors to reduce power requirements, was available for only £400 (£1,310) and even came with interchangeable fingers[2].