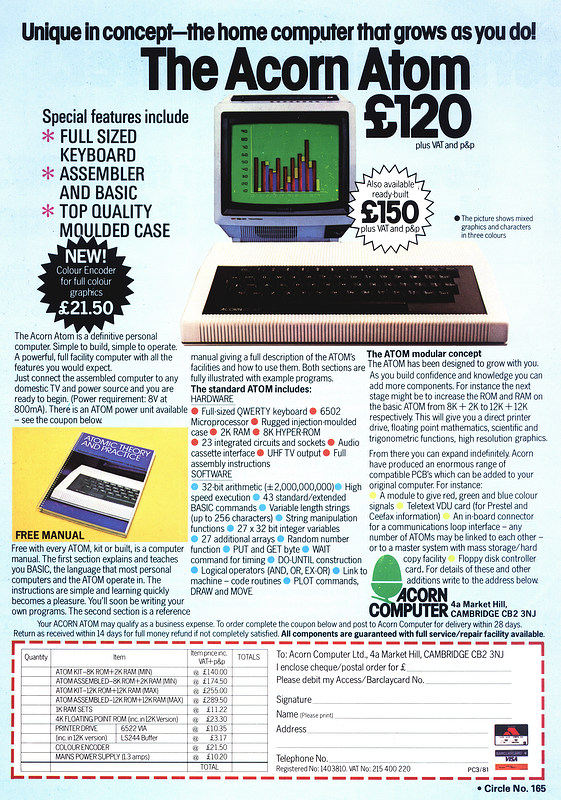 "Unique in concept - the home computer that grows as you do!"

The Acorn Atom was a 6502-based 8-bit computer that in its basic version managed to pack even less RAM than the VIC-20: 2K compared to 3.5K. However, it was very modular and so could be expanded easily enough, and if nothing else it led Acorn on to produce the UK legend that was the BBC Micro and eventually the ARM processor.

The Atom came under pressure during 1981 with the "blaze of publicity" surrounding the up-coming, but eventually delayed, launch of the company's next machine - the Proton - soon to be known as the BBC Micro. Now often known as the "Osborne Effect", but also suffered by Nascom when the Nascom 2 was first rumoured, the drawback of talking about newer or cheaper (although not in the case of the Proton) or just better-specced machines not yet released is often that sales of the current model - which may be financially sustaining the company - dry up, sometimes completely. This effect is credited with causing Osborne some serious financial problems, although it didn't actually cause the collapse of the company. It caused Acorn problems too, but it too managed to survive[1].

The Atom was priced at £150 plus VAT (about £590 in 2020) built, but was also available for £30 less in kit form - a procedure which was not without risks as it's obviously impossible for the company to fully test that the machine is "working" if it's not yet even built. A letter in April 1982's Personal Computer World pointed out that two of the transitors supplied in an Atom kit were completely the wrong type, with pnp being supplied instead of npn - electronically about as bad a putting a battery in backwards. This led led to poor video output and when questioned, Acorn revealed that about 100 kits had been sent out like this[2], although it seemed that there may have been more. Most users would probably have never known about it and would have carried on regardless with a fuzzy picture, assuming that that was simply how it looked.

The Atom on board the RMS St. Helena, © Practical Computing, March 1982In the spring of 1982, Acorn was busy showing off about how an Atom had performed on a ship and on the remote island of St. Helena. The machine had been used in a field exhibition mounted by the geography department of University College in London and, despite dodgy power supplies in both locations had "worked perfectly"[3]. The arrival of the Atom, which had been built from a kit by expedition deputy leader Tony Nicholson, was also notable as it was the very first computer on the island, a British colony located some 2,000 km south of the equator and which didn't even have a runway. Its primary use was to analyse the results of a questionnaire sent to a thousand of the island's 5,000 inhabitants sometime before the voyage set off, but perhaps its sternest test came when it was "hammered" by classes of schoolchildren "who had never before played, or even seen, Space Invaders"[4].