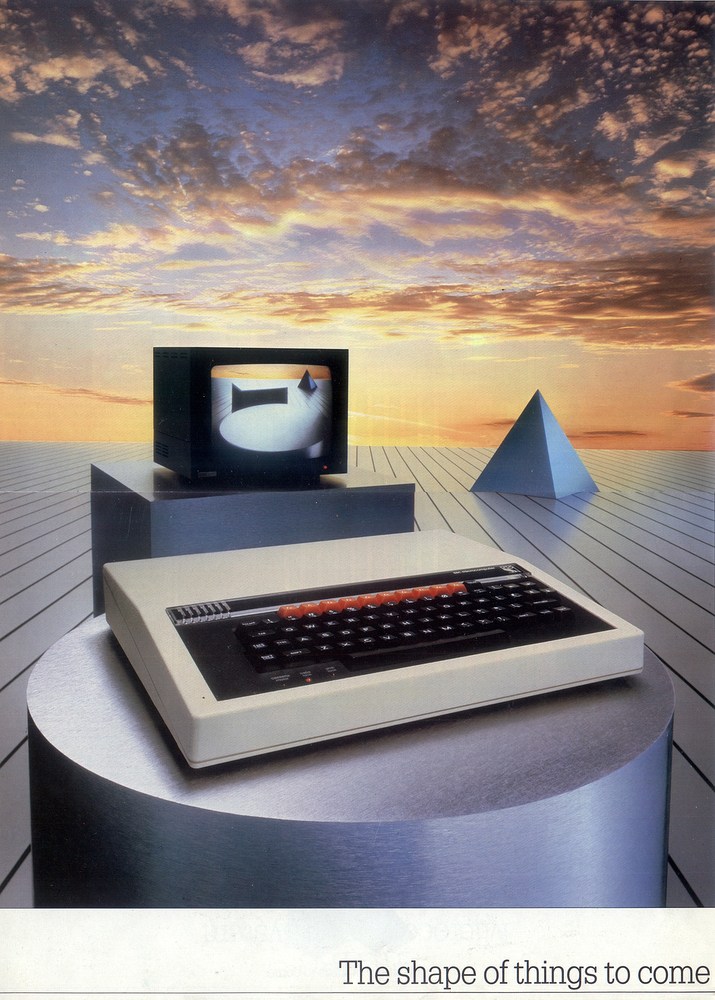 The BBC Microcomputer System: The Shape of Things to Come

From this attractive A3 sales brochure is the quote "Amongst the shifting sands of computer technology the BBC Microcomputer is here to stay". And it was, in its various guises, until 1994 at least, which - at 13 years - was an impressive run for any make of computer. Considered by Acorn's co-founder Hermann Hauser as more of a competitor to the Commodore PET or the Apple II (and beyond thanks to planned 16-bit capability) rather than arch-rival Sinclair's Spectrum, hackles were frequently raised between the two rivals during various tit-for-tat face-offs in the press. Hauser said "Sinclair is the only one who has enough arrogance to compare the BBC computer with his own. He is comparing chalk with cheese and it is based on his own exceptional arrogance rather than the facts. We thought the appropriate way of dealing with this was to produce a machine which shows him how it's really done"[1]. Two months later, Sinclair retorted with scorn about Acorn's up-coming Electron - "The Electron isn't here for a start - not expected by them until the end of the year - and not by anybody wise until next year. It will come out a year later than the Spectrum and be way behind it in technology. It will have - as Hauser says - more RAM, ROM and ULA, for the simple reason that in my view they don't know how to produce a machine half as well as we do"[2]. All classic "My dad's bigger than your dad" schoolboy playground stuff.

The BBC was considered particularly well engineered and versatile with a "remarkably clever hardware design and [versatility coming] in part from the extensive and well-designed resident software in the form of BBC BASIC, the assembler and the Machine Operating System"[3]. The BASIC and MOS were each stored in their own 16K ROM, with the combined 32K being particularly high for a micro from 1981. Although the BBC sold well, its sales of somewhere over 1.5 million were in large part down to the BBC's Computer Literacy project and the subsequent take-up of the BBC Micro in schools, no doubt helped along by the generous government subsidies around at the time[4]. Even so, at the time Acorn's Curry didn't see it like that, saying in an interview with Practical Computing that "The education market for us has been quite a small proportion of our business; so far it hasn't made a lot of difference to Acorn"[5].

There were some interesting features present - one such being "The Tube", which as the advert states was a high-speed data channel ("bus") which, although initially reserved by Acorn for exclusive use of their own products[6], could take a second processor like a second (but even faster at 3MHz) 6502 or a Z80 for CP/M. It ran at the same 2MHz as the BBC's native 65C02 processor and was twice as fast as the regular 1MHz bus, the latter's function being more of a general-purpose connection for things like Acorn's range of Eurocard modules from their original System 1. The Tube also made use of a custom chip to pass data between the on-board 6502 and other connected processors at a high rate and in a standard format.

The Tube was Acorn's way of resolving how a single machine could be all things to all people, as during the design phase one engineer wanted a dual-processor system, another reckoned one would do, chip designer Andy Hopper wanted it to be 16-bits and Chris Curry wanted anything as long as the machine cost less than £300. Hauser recounted how coming up with the idea of the Tube solved everything and how 'we had a good drink after that and got rather self-congratulatory'". The original forecast for the Z80 add-on had been March to May of 1982 and even Hermann Hauser had suggested Autumn in an interview published in September's Your Computer, but it had still not appeared by September and sources were quoted as suggesting that the end of 1982 or even in to 1983 was more likely[7]. Later on, after the IBM PC had been launched in the UK, Torch Computers actually supplied an entire IBM PC compatibility module, although this ran over the BBC's 1MHz bus rather than the 2MHz Tube, seriously limiting its performance. The BBC also supported lots of early networking, including local area networks via Econet, and a custom Prestel module.

The "Beeb", as it was often known, was not without its faults. It would fail to save a program (to cassette tape) one time in 16, due to a bug that corrupted the first block header on the tape, and it would often not load a program because of phase problems in the tape recorder itself. Unlike Commodore, which only supported dedicated and more reliable (although more expensive) "datasette" cassette recorders, the BBC Micro, like most other home micros of the time, could plug in to any old tape machine. It could also fail to save because the BBC's audio output would overload the recording input of the tape recorder, although a 5K resistor in series would fix this. Finally, the BBC would get confused about the length of strings if they grew during the runtime of the program, as it would store them in a new memory location every time they increased in size by an extra 8 bytes[8]

It had also been a bit late to market - in fact it had only just appeared by the time the program that it was to support actually started broadcasting on television, although not in any serious numbers - only a few hundred were available when the programme launched[9] which, as detractors of the BBC's involvement in its namesake's microcomputer were keen to point out, caused the BBC some reputational harm. The delays had been apparently due to chip supplier Ferranti's choice of silicon for its production run - the different quality used to the pre-production prototypes caused a degradation of the clock signal across the chip meaning that the chips wouldn't work. Guy Kewney of Personal Computer World was impressed that the BBC Micro was even released when it was, as it was only half-designed when the BBC switched over to Acorn, at the last minute, after they had decided that their original choice of the Newbury NewBrain (which had been picked in November 1980) would not be available[10].

When asked about on-going delivery delays, Hermann Hauser, in an interview with Your Computer published in 1982 referred to the Ferranti issue: "We've learnt our lesson. It is always very difficult to predict the exact numbers people will order and you can only predict within a factor of two or three. We are the only company in this field which designs its own ULAs. This allowed us to produce a computer as versatile as the BBC because we were able to milk the Ferranti processor - but it also meant we had difficulties in high-volume production because the yeild was too low. There were limitations of the Ferranti processor that neither we nor they knew about"[11].

In February 1982, Acorn issued a press release addressing the delays in shipping the BBC Micro. It suggested that 12,000 orders had been received following 135,000 enquiries but that only 600 machines had been delivered. The company was expecting to gear up production to around 2,000 a week and was hoping, optimistically, to have cleared the backlog by March[12]. However, a couple of months later, whilst the backlog on the Model A was down to only 21 days, there was still a 12,000 order backlog on the Model B, with the end of July being mentioned as the earliest that many people were likely to take delivery of their long-awaited machine[13]. To make things worse, as soon as production started to ramp up it was halted again by a strike at main supplier ICL. ICL's output from its Kidsgrove factory of 700 units per week - already 500 per week below target - ground to a halt completely, meaning that no Model Bs were being produced. This meant that alternate supplies from AB Electronics were hurriedly brought on-stream, whilst Race Electronics of Llantrisant would begin manufacture in the middle of July. Speaking about how Acorn should have been at the point where it could fulfill all of its orders within the 28-day window "ages ago", the company's John Coll said "I'm saddened and frustrated by the whole ICL situation. The position is acutely embarrasing"[14]. Deliveries of the Model A had been unaffected by the strike, but this machine would be discontinued at the end of August 1984 as by then, according to Acorn, it only accounted for a small percentage of BBC micro sales[15].

By the end of 1982, Acorn's embarassing order backlog had been cleared and the machines were finally readily available, in time for a second series of TV programmes which was due to start on the 10th January 1983. The first series had been designed, according to producer David Allen, for "people with no experience of microcomputing", however it quickly became apparent that people were expecting more about how to actually program a micro. So the second series - "Making the Most of Your Micro" - addressed this by concentrating on actual programming techniques, and was definitely aimed at those who already had computers. Allen acknowledged that "without the first series, this new one would not have been possible", but even though that had nominally been targetted at the BBC Micro (despite that face that it was mostly missing), this time around things would be a bit more inclusive, although all micro-time in the studio would still be on the BBC. "Obviously, people have different machines. We shall have PETs, ZX81s and so on, but ... as far as possible we shall try to deal with common ground on the different machines". The software demonstrated in the programs was to be made available on cassette as well as via a new telesoftware service on Ceefax, the BBC's Viewdata service, which was due to launch in the early part of 1983.

Allen also addressed criticism of the BBC's close association with Acorn when he suggested that "Having a dynamic relationship with one company has been invaluable. With them we have been able to develop software for the programmes and produce a vital special board which enables us to put up the computer's output clearly on the [TV] screen. Even the subtitles are generated from the machine"[16]. The special relationship also meant that Acorn's John Coll even appeared on Episode 1, giving a brief tour of all the components that were required to build a micro.

Despite Acorn's claims that all was going well with the BBC Micro, there were clearly still problems with some of the machines that had so far made it into the market, with an apparently high percentage being returned for repair due to faulty chips and overheating. As P Webb's letter in August 19th's Popular Computing Weekly pointed out, "what with defective ULAs, the 'provisional' user guide, an operating system that does not follow the specification and a failure rate - at my computer club anyway - of around 50%, I think the BBC and Acorn should christen the BBC Micro, as I have done, 'The Lemon'"[17].

Those sorts of criticisms were common of microcomputers and their makers at the time, which was characterised by "an excess of demand over supply", fulfilled by tiny companies with long waiting lists and "forgiving, enthusiastic customers". Acorn's strategy was to grow through this period by concentrating on becoming sufficiently large and flexible enough to survive. As Curry said at the end of 1982, "For the next year we will grow as much as our profits will allow us to grow - wide growth in all directions that we are technically capable of going into. Then we will select whatever sphere of operation is the best bet for us. I don't think just one, but we will select perhaps three areas to concentrate on". He concluded that Acorn "will survive by having lots of strings to our bow"[18].