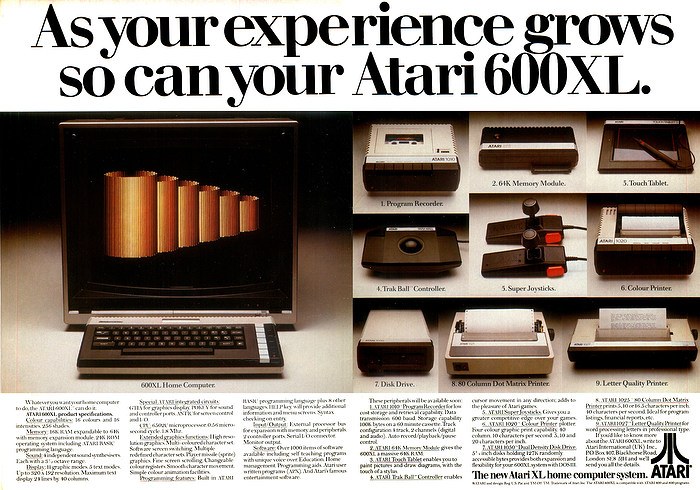 As your experience grows, so can your Atari 600XL

The 600XL was one of two computers launched by Atari - the other being the 800XL - at the summer 1983 Consumer Electronics Show in Chicago. It was available in the UK in quantity by the end of the year[1] but first went on sale in the week of the 3rd November 1983. The 600XL was one of a series of "XL" machines designed to replace the ageing 400 and 800 line with something offering better specs, even though both the 600 and 800 models were still running the CMOS version of the 1975-designed 6502, the 6502C. Both machines were designed to have much-reduced manufacturing costs, mostly in order to compete with Commodore, which had kicked off a price war with Texas Instruments[2]. TI eventually got cold feet in the face of mounting losses and reducing profit margins and exited the micro business at the end of 1983, just as the first signs of a possible thaw occured. Atari was part of the collateral damage of the same price war and had been lucky to survive long enough to actually get the 600XL out of the door, as the Warner-owned company had already racked up losses of $425 million in the first three quarters of 1983[3] - that's in the region of £1.5 billion in 2014 terms. In common with many other companies at the time, Atari already moved its manufacturing out to Far Eastern companies like Wongs - the system builders that started out in 1965 as manufacturers of transistor radios - in order to reduce costs.

The 600XL was intended to replace the 400, with the 800XL replacing the 800, whilst the 600 could also be upgradable to the 800XL for an extra £90. The two machines were also meant to mark the start of Atari's recovery plan, following the company's recent huge losses, but weren't significantly different from the machines they replaced - indeed they were both completely software-compatible with the earlier models. Graham Clark, Atari UK's MD said "Both machines will have all the features we have had with the 400 and 800, but at a price we can make money". He continued "Everyone, over here and in the US, is stumbling through a period when margins are declining, and some will go down. But Atari is here to stay and we are beginning to recover our position". With un-dampened enthusiasm and, in hindsight, mis-placed confidence, Clark concluded "In most of the major markets I think we will see good sales this Christmas. Obviously it takes time to build back up a market share like Commodore or Sinclair, but I think by Christmas 1984 we will have a very substantial piece of the UK market"[4].

As the price war raged, Atari, like Texas Instruments before it, was forced to continually reduce the selling price of its machines to try to shift them, but in doing so sacrificed its own profit margins[5]. However by the November of 1983, just as TI had left the business, Atari - along with Coleco - announced a rare increase in its wholesale prices for the 600XL and 800XL, effective from the 1st January 1984. At the same time it announced that it was not taking any more orders for the rest of 1983, as it had so far only been able to fulfil 60% of the orders it already had in the run-up to Christmas, saying that it was "surprised at the level of orders for its new computers". Responding to the news, Atari UK said that it had "no plans to increase the price of the machines in Britain"[6].

The first rumours that parent company Warner Communcations might be looking to sell off its loss-making division occured at the end of 1983 when Australian media baron Rupert Murdoch bought a 6.7% 4.4-million-share stake in Warner for $98 million. Murdoch, with his extensive cable and satellite communcations interests was thought to be after Warner's large film library and its share in Warner Amex Cable. The Atari division, leaking hundreds of millions of dollars as it was, was clearly not part of this plan - as Popular Computing Weekly pointed out, "Atari has suddenly become persona non grata in a very big way". There was some talk that Atari might be sold off to - shock - a European electronics conglomerate, with Thorn EMI and Philips being suggested as likely suitors. Philips in particular had been selling its own G7000 video-games system to little effect, trailing in a distant third behind Atari and Mattel's Intellivision. Commenting on the rumours, Atari UK's managing director Graham Clark said "I am aware of the speculation but it would appear to be the result of confusion with the Philips-Warner record deal", a reference to the recent merger announcement between Warner and Philip's Polygram record label[7]. However, in early 1984 it was revealed that Philips had actually been in talks with Atari over "a number of possible joint ventures". President of Philips, Wisse Dekker, confirmed that the discussions were mainly over Atari's non-US interests, with a particular focus on expanding Atari in Europe, via a joint venture, and research into video games using Philips' Laservision disc technology. Both Dekker and Atari's Chief Executive James Morgan continued to deny rumours that Philips might bid for Atari International itself[8].

Atari did survive to be bought up by Jack Tramiel, formerly of Commodore and who had done much to start the price wars that decimated Atari and many other companies. The company, under Tramiel, would eventually release the more successful Atari ST in 1985.

One of Atari's lesser-known claims to fame was that the gents' urinals at its UK headquarters had Apple's logo "right where you aim", according to Personal Computer World's Consultant Editor, David Tebbutt, reporting after a visit at the end of 1982[9].