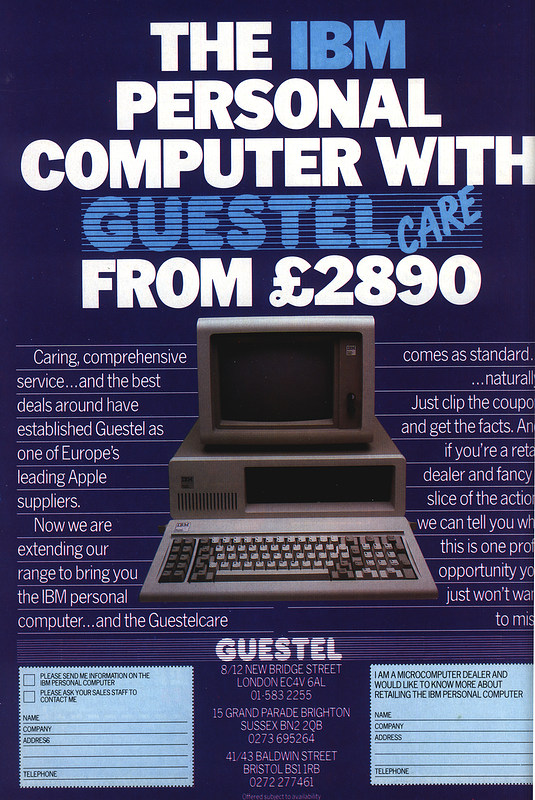 This is a third-party advert for the original 5150 IBM PC, possibly the model which more than any other defined personal computers for a generation or two. Even the term "personal computer" (or PC), which had once refered to anything that could sit on a desk or be plugged into a television, has come to mean specifically a computer compatible with the IBM PC format. Unfortunately for IBM, its quickly cobbled-together machine was made out of off-the-shelf parts with only the BIOS - the "Basic Input/Output System" that allowed the machine to actually start up - being proprietary. This, however, was soon reverse-engineered which meant that suddenly other companies could produce clones of the IBM and pretty much commodotise the "PC" computer market, especially as Microsoft was already selling more-or-less the same operating system used on the IBM - PC-DOS - as a stand-alone product called MS-DOS. Before long, it was only banks and corporates who bought actual IBMs - the quote "no one got fired for buying IBM" remaining popular in the 80s.

The 5150 was not without issues: the display was prone to flashing, for which IBM added the fix of making the phosphor in its monitors extra persistant. It also suffered from power-supply-related issues, with the built in 60 Watt power unit proving incapable of reliably running the machine plus a serial and video card without overheating. There was a good business to be had in producing PSU upgrades[1].

And it was certainly not efficiently designed, at least when compared to something like Sinclair's Spectrum, as Uncle Clive was quick to point out in an interview with Practical computing whilst the IBM was still unavailable officially in the UK. Sinclair had a particular - almost hubristic - belief in the value of elegant and "advanced design" as a way of defending his relatively tiny company against the global behemoths such as Big Blue. He also reckoned that IBM was at a huge disadvantage because of its size and suggested that in a one-to-one confrontation Sinclair would win, at least on the grounds of elegance. "If you take [the Spectrum] apart, and theirs, you will see that theirs is very old technology. On the outside the IBM PC may look elegant but inside it is board after board after board of chips. The cost of making it must be astronomical". Sinclair continued "Open one up - it is unelieveable. They have a board about the size of a large coffee-table book with God knows how many chips on it, it must be a hundred, just to do colour. We do it on one chip". Conceding that big companies simply couldn't make innovative steps and had to make the best of the time available to them, given that they were playing catch-up, Sinclair suggested that "In the same way that the big motor-car companies will not be the leaders in electric cars, just as the big yacht companies were not the people that built the steamers, just as the great train people were not the people that made the cars, just as they in turn were not the people who built the planes. Every time there is a new technology, a new generation of companies comes along"[2]. That 1982 quote sums up nicely that so-called "disruption", which of course is something only post-millenial companies run by people with beards can do, is nothing new and has always been the way of business. 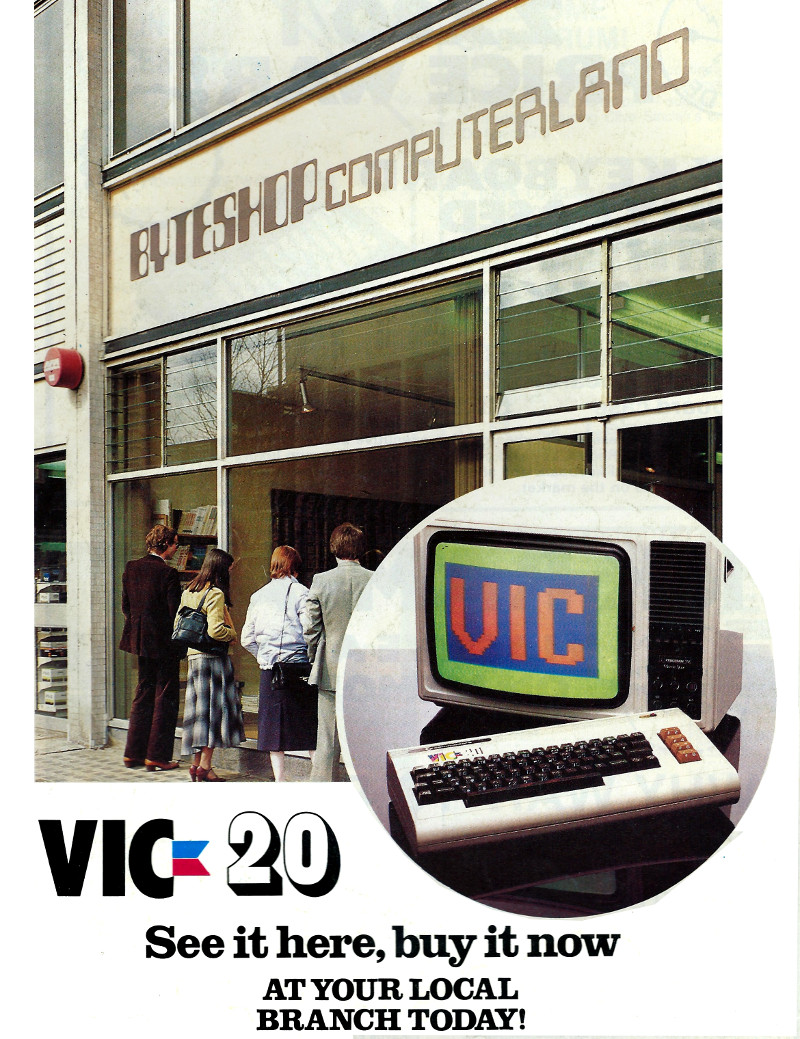 A Computerland shop, © 6th May 1982, Popular Computing WeeklyThe cost for the 5150 shown in the advert of £2,890 would be about £10,800 in 2022 terms, although this does include some sort of dealer warranty. It wasn't especially cheap, although its high cost may be at least partly explained by the sheer chip count that Sinclair observed in its construction, and IBM's baby was considered underpowered even when it came out. It ran an Intel 8088 which was a 16-bit CPU but only had an 8-bit data bus, which slowed things down. On the upside it had a 20-bit internal memory architecture, which meant it could address up to 1MB of memory, even though the entry-level machine provided a measly 64K. A famous meme suggests that Bill Gates once said that "640K was enough for anyone", so a 1MB limit would seem a quite generous. However, the quote never happened and Gates has spent a lot of time since denying it[3].

In Europe, the Sirius/Victor 9000, which used the same 8088 CPU, was considered a much better machine and for a while outsold the IBM, until IBM finally got round to distributing the 5150 directly and the weight of PC standardisation crushed everything else. This didn't happen straight away though, as despite being launched in the US in 1981, by February 1982 there was still no sign of it in the UK, largely because IBM was running an order backlog of some 40,000 units and so there was no spare production to service any non-domestic markets. This situation remained until Mick Punter of Micro-Computerland, a subsidiary of Zeus-Hermes, unexpectedly started importing machines direct from (the non-related) Computerland in San Francisco, an authorised IBM dealer - an activity which apparently aroused the interest of the UK's Fraud Squad and which led to the firing of a number of salesmen[4]. Importing the 5150 required use of a voltage conversion adapter to go from US 110V/60Hz to UK 240V/50Hz, but despite the hassle about 20 64K machines at £2,875 (£10,700) each were sold at the UK computer show Compec[5].These "grey imports" were subsequently advertised by Micro-Computerland in February 1982's Personal Computer World[6] at £2,800 + VAT - around £12,000 in 2022). At this time, Punter still had no idea when IBM might actually start shipping a proper UK version.

It was thought that Micro-Computerland eventually sold hundreds or even thousands of IBM PCs in this way before it quietly went in to voluntary liquidation at the beginning of 1983, basically bankrupted still waiting for the official shipping of the thing[7]. At least its liquidation was quiet until a notice of a creditors meeting arrived on the desk of Personal Computer World journalist Guy Kewney. This revealed that as well as there being an outstanding civil action against former directors to the tune of £10,000, others had clearly legged it, as "extensive enquiries have failed to reveal the whereabouts of a debtor who owes £3,789"[8].

Once the IBM PC had launched, speculation turned to the effect that it might have on the existing incumbents like Commodore and Apple, which had built the very market that IBM was now threatening. To some extent, the early market - according to Martin Banks of Personal Computer World - was developed by computer freaks, and their first customers were also computer freaks. By 1981 though, the home computer market was exploding and several companies, especially Commodore, abandoned the business market to target home computers. By the time IBM moved in, the business market had grown significantly, but more importantly it was moving away from its traditional reliance on mainframes and minis. When the "jolly blue Leviathan IBM" chose to enter this burgeoning market, Banks pointed out that "It is perhaps on the performance of IBM's personal computer, more than any other company's, that the fate of the existing microcomputer manufacturers now hangs. If IBM gets it right as it might at first appear to have done, then some of these companies could be in for a rough ride. Some indeed may not make it". He continued "IBM becomes one of the first companies to produce a single system that gets close to the utopian 'all purpose' machine. It can be produced cheaply enough to be directly price-competitive at the low end and it is powerful enough to be performance-competitive at the high end. Add communications facilities such as the optional IBM 3270 emulator and the company is seen to cover more bases in one go than any company before it". Banks speculated that Apple, Tandy and Commodore - currently at the top of the micro pile - might be the ones to suffer. Apple was narrowly focussed, but had the advantage that it was the darling of Wall Street. Tandy was very widely based with not just its micros but its whole Radio Shack empire. Commodore, although it had just launched the then-unknown VIC-20, was still mostly relying on the PET which was somewhat "long in the tooth", so it "could be a favourite for something [to happen], which could range from a new system, via a takeover, to demise"[9].

The IBM 5150 didn't officially launch in the UK until January 1983. One reason given for this was the company's lack of expertise in managing the complex dealer and distributor network in Europe which, unlike the far-more-homogenous US where IBM had its own retail network and the nationally-known Sears Roebuck to sell through, didn't have any one national name available to it. Nevertheless, IBM was clearly attempting to build some sort of bridge-head in Europe and announced in early 1983 that it would be setting up a factory at Greenock in Scotland in order to manufacture the machine. Kenneth Baker, Minister in charge of Information Technology at the time, said "I warmly welcome the decision by IBM to manufacture their personal computer for the whole of Europe at Greenock. It is further evidence of the company's commitment to this country"[10]. Once IBM did start selling in Europe, the requirements for potential dealers were particularly stringent: they had to sign an agreement which dictated the sort of behaviour that IBM expected of them; they had to agree not to hype the capabilities of the IBM machine not to disparage other companies' products; they had to agree to do warranty fixes no matter where the faulty machine was purchased and they must send two sales and two engineering staff on IBM training courses. At the same time, IBM had the right to undertake spot checks on dealer premises and even to interview staff to check that standards were being maintained[11].

By 1984 - only a year later - the press seemed to be fed up with the whole IBM PC and the rise of the clones thing, with Personal Computer News writing that "the most depressing feature of the [1984 Hannover Computer Fair] was the proliferation of so-called IBM PC compatibles. No matter where you turned a manufacturer felt obliged to turn out a micro to nibble at the heels of IBM"[12].