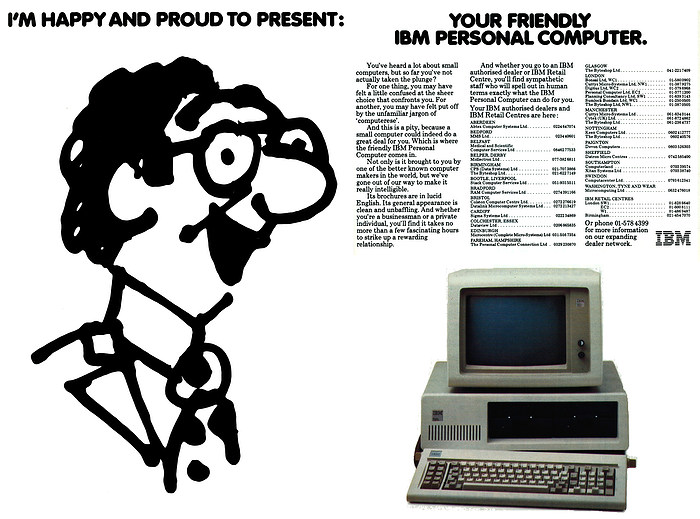 The IBM had been unofficially available in the UK via the grey import market since the summer of 1982. It was being imported by companies like Micro Computerland, which was thought to have sold possibly thousands of machines in this way before it eventually went bust at the end of 1982, still waiting for the official release[1]. This didn't happen until January 1983 with this advert being just a couple of months later, so very much part of the formal launch of the 5150 in to the UK.

IBM was another company that was clearly recycling Commodore's "friendly computer" tag that the latter had used with the VIC-20. The IBM PC could be argued to have been anything but friendly, with its high price, low specs and hostile early version of MS-DOS (PC-DOS v. 1).

Over in the States, at end of 1983, IBM added another 300 shops to its distribution network, bringing the total up to 1,100. This meant that more than half of all computer shops in the US were offering the IBM PC. It also had its own branded retail outlets, with nearly 100 opened by the end of the year. Writing in October 1983's Personal Computer World, Sol Libes said "There is no doubt that IBM has become the most aggressive marketer of small business computers to appear on the personal computer scene. It spends as much on advertising as all its leading competition combined"[2]. It was noted though that this hadn't translated well to the UK or Europe, where ACT/Victor's Sirius 1 was still doing well.