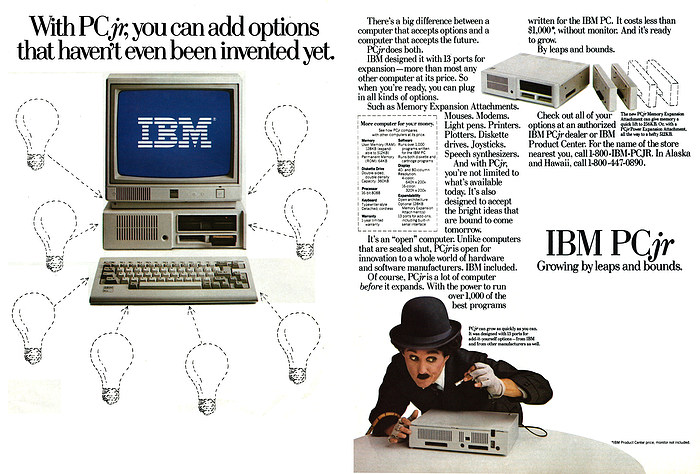 With PCjr, you can add options that haven't even been invented yet

The PCjr, also know by its development code-name of "Peanut" - and variously as Hercules, Sprite, Pigeon and Pancake[1] - was IBM's attempt to crack the home market, which at the time was mostly owned by the Commodore 64 and Sinclair Spectrum.

The system provided an RF modulator so the Peanut could be plugged straight in to a television, as well as utilising an infra-red battery-powered keyboard, with an expected battery life of three months, so potential users could kick back on the sofa. Not that IBM was predicting conflicts with other infra-red devices like remote controls, but there was also a $20 cable kit available.

The Peanut also came with "hot-plug" cartridge slots on the front, as well as a kind-of stacking plug-in module facility, where optional extras could be chained on to the side, much like it's possible to dangerously chain a load of New Zealand mains plugs together.

The attempt failed, in part because of the shockingly-bad keyboard that shipped with the original machine - referred to as "a new standard for intentional product handicapping" by Byte Magazine[2] - but also because it was expensive for a home machine, with the price being set high, or "horrendously over priced", according to Personal Computer News, to prevent cannibalisation of its big brother[3].

There was a cheaper entry-level version available, going out at around $669 (which would be reduced to $599 in the June '84 campaign), however the company admitted at the end of 1983 that only a small proportion of advertised "IBM PC-compatible" software would actually run on the cheapo version, and even then a bunch of those required an additional $75 Basic extension cartridge. Of the five programs announced by IBM specifically for the Peanut, only one actually worked on the basic model[4].

Sales had been slow since it was first launched in October 1983 - a month late, much to IBM's frustration. It was the same week as TI left the market, following a damaging all-out price-war with Commodore and others, revealing as it did so that it had never once made a profit in the personal computer business[5].

IBM was hoping to produce 20,000 machines for the North American market by the end of 1983, with 300,000 the following year, however its own manufacturing capacity was being seriously stretched by the success of its bigger-brother PC. It was not therefore expected that the machine would even be available in the US in volume until well into 1984, and thanks to its NTSC-only TV output it was even longer before a UK version might make an appearance[6].

This particular advert reflected an attempted "re-launch" of the Peanut with a reduced price - combined with a relaxing of its usual dealer terms, in order to "ease their burden of carrying stocks of unsold PCjrs"[7]. The updated machine finally came with a better "typewriter-style" keyboard, but it didn't help - the Peanut was canned in March 1985 and never even made it to the UK, which is just as well as it would have no doubt been eaten alive by Amstrad's offerings.

It was all somewhat ironic as rumours of the PCjr, starting for at least a year before it finally launched caused a "peanut panic" that seriously impacted the sales of competitors leading up to the Christmas 1983 period, as people waited on IBM's new wonder machine[8][9].

Meanwhile, signs of IBM's sewing-up of the business-micro market were becoming apparent. Writing from the US in August 1984's Personal Computer World, David Ahl reported that new PC manufacturers were already finding it increasingly difficult to get shelf space, as dealers were limiting the number of lines they carried in order to reduce inventory costs and the training of service personnel, as well as technicians and sales people.

The recent Chapter 11 (bankruptcy) filings of Osborne, Victor and Computer Devices was also making retailers wary of new companies without any track record. Instead they were preferring to stay with a group of companies which already seemed depressingly familiar: Apple, HP, DEC, Compaq and IBM.

These companies - apart from Apple which never sullied itself with selling low-margin products at the masses - were also starting to target up and down the value chain in order to expand their reach, a policy which also reduced the need for retailers to look elsewhere to fill market gaps.

The spate of company failures was also causing problems for existing clone makers, as buyers were reported to be wary of saving 20-25% on a computer if the company they bought it from wasn't going to be around after a couple of months. This was leading to a "two tier" system of dealers, with the top companies offering the "big" names and everyone else selling random stuff from the clone makers[10].

Boris Allan, writing in Popular Computing Weekly in early 1984 echoed this sentiment when questioning why IBM's PC was becoming so popular even when it was seriously over-priced compared to competitors like Sirius, or clones like the Advance 86. The answer was that "You can trust IBM, they will not fold overnight, and when they enhance their machines they always ensure that old software will run on the new machines. How many other personal computer manufacturers can say that?".

The added irony for the clones was that their very existance relied on IBM's continutation because, as Allan pointed out, "Who wants to be a look-alike to a manufacturer whose products do not sell well?". At first all they could do was make their clones cheaper or faster or more capacious, but they couldn't - nor did they want to - drive IBM out of the market. That wouldn't happen until IBM sold its PC business to the Chinese company Lenovo in 2005 and its x86 server business in 2014[11].

IBM couldn't resist the home market, despite being badly burned by the Peanut, and returned to it in the late summer of 1990 when it launched its PS/1 - ostensibly a cut-down version of its then-flagship PS/2 range.

Things didn't get off to a good start if an early review by Guy Kewney of Personal Computer World was anything to go by, where he concluded that anyone reserving room for IBM's new machine might as well use the space for a video recorder instead, before suggesting that the computer base unit looked like it might have been designed by deeply-unfashionable Eastern European car manufacturer Lada.

The PS/1 was built vaguely along the same lines as its bigger sibling PS/2, which was considered something of a masterpiece of engineering. However, it did appear to be only "vaguely", as although some components slid in to their spots in the same way, they could only be connected internally with fiddly ribbon cables. There were also apparently some other odd design decisions - if an additional 5.25" floppy was added, in addition to the supplied 3.5", it was necessary to power it from the interal modem.

Kewney summed it up by saying "at £500 the system would be a dead loss. No serial port, the ugliest piece of plastic I've ever seen, the clankiest screen on earth [and] a very ordinary keyboard ... make this a real turkey". He concluded "And I bet you anything IBM asks damn near £1,000 for this mess"[12].