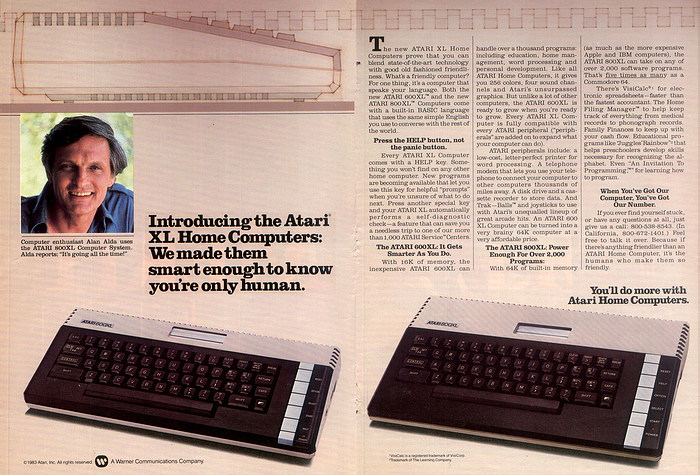 Commodore had already run adverts for the VIC-20 with the celebrity endorsement of William Shatner and M*A*S*H's Harry Morgan in the US, and had used legendary 70s comedian Ronnie Barker in the UK. Atari seemed to be paying homage to this when it released this advert a few years later with Morgan's co-star Alan Alda, here offered up as a "computer enthusiast" who apparently reports that his Atari 800XL is "going all the time". Atari also pinched another feature of Commodore's VIC-20 advertising from three years before with the phrase "friendly computer".

Atari's XL series was an evolution of its earlier 400 and 800 models and came at a time of savage price wars, brought about in part by Jack Tramiel of Commodore's ultimately successful attempt to force TI out of the computer game - in revenge for TI's destruction of Commodore's calculator business of the early 1970s[1]) - but also thanks to a general malaise caused by users holding out for promised better 64K colour machines launching later in the year together with a general push-back against cheap-and-cheerful machines currently dominating the market[2]. The industry was said to be buzzing that Atari would join in with Commodore and drop its prices, when the latter lowered the price of the VIC 20 "starter pack" in early May '83 - the move which possibly started the price wars of that year. Commodore's marketing manager, John Baxter, said "we are reducing prices on the whole range of items - hardware, software and peripherals". TI - the target of Jack Tramiel's wrath - responded with cuts to its 99/4A, including bundling a speech synthesizer worth £50. Other companies including Sanyo and Sinclair were also in on it, whilst Atari, Oric and Lynx were biding their time[3].

Atari's machines used the same MOS Technology/Commodore 6502 at nearly 2MHz as their ealier models, but had much-reduced complexity and manufacturing cost. Unfortunately for Atari, 1983 had been the year of the "video game crash" and it was up against Commodore's 64, which was far more readily available during the crucial Christmas 1983 period when the 600XL and 800XL were finally launched in the UK - nearly a year after their limelight-stealing debut at the Winter CES in Las Vegas[4]. By early the following year, Wall Street commentators were already suggesting that Atari would get more finance to keep it going if it dropped hardware completely, which contrasted with the success that everyone seemed to be predicting for Atari's software tentacle - Atarisoft. Atarisoft was already producing a lot of software, much of which had been demonstrated at the Winter CES, but significantly it was producing it to run on the VIC-20, Commodore 64, TI 99/4A, Apple II and IIe and IBM's PC. However, James Morgan - Atari's MD - had nothing new to show by way of new hardware, although at least the first 800XL and 600XLs were starting to appear out of the factory in numbers.

Despite the predictions of hardware sell-off and dodgy finances, Atari was still insisting that it was through the worst, having shed some 2,000 jobs in the US and moved manufacture to the Far East, Puerto Rico and Ireland. Morgan stated "We spent too much, but that has been purged out. We are a company that has bottomed out and is on the way back. For somebody to walk out of the business now would be crazy - the opportunity is too great"[5]. Crazy maybe, but that's exactly what happened. Atari had racked up losses of $425 million in the first three quarters of 1983 alone[6] whilst revealing the fact that it had never made a profit in the personal computer business, despite at one point holding the number one spot. Its share of the games market had also slipped from 80% to 40%[7] and its owner, Warner Communications, was keen to sell, which it succeeded in doing when the company was eventually sold to none other than Jack Tramiel, who was ousted from Commodore at the beginning of 1984. Just before that happened, in the June of 1984, Atari announced that it had closed its Hong Kong production facility and had dropped the 600XL as well as the 5200 game unit. The 800XL, newer 7800 game system and the venerable 2600 "Woody" remained in production[8].

There was another neat Commodore connection: a video game hooked up to an exercise bicycle had been launched for Atari computers during 1983's West Coast Computer Faire. As a way of making exercise biking more interesting, the $69 game required the user to actually pedal in order to progress through an obstacle-course. The company that launched the game was Exus Corporation, whose CEO was none other than George C Coakley - the man who had created the pet rock fad of the 1970s which gave the Commodore PET its name[9][10].

In the late summer of 1984, six months after this advert, the prices of the 600 - which hadn't actually been cancelled - and 800 XL were slashed in the UK by £60 and £50 respectively, bringing the 600 XL to under £100 for the first time. As Atari's marketing manager Rob Harding was at pains to point out, it was "by no means a 'flog off' - we plan to continue marketing all products" - a statement which seemed to be aimed at those earlier suggestions that Atari should get out of the market completely. Harding also suggested that "The new retail price list, we believe, reflects the true marketing prices for the products", a statement which reflected the new reality within Atari since its takeover by the former head of arch-rival Commodore, Jack Tramiel. He continued "With the new management there is a drive for Atari to become more competitive and agressive in the UK", as it was looking to improve on its current market position of 15% to Commodore's 45% towards more of a 30:30 arrangement.

Meanwhile, it was announced that the interim MD since Tramiel's take over - Simon Westbrook - would keep his post and that Commodore International's David Harris was not now taking over the role[11]. Several other Atari roles were taken up by either the Tramiel family itself or other ex-Commodorians, as well as Jack as chairman and CEO, and included sons Sam as President, Leonard as head of software and Gary as debt collector - Atari still had $400 million in unpaid debts - as well as not-a-son Leonard Schreiber as vice president. Other staff who left Commodore in Jack's wake included Donald Richard and marketing VP Myrrdin Jones, plus four engineers whose departure immediately triggered a lawsuit from Commodore alleging theft of trade secrets[12].