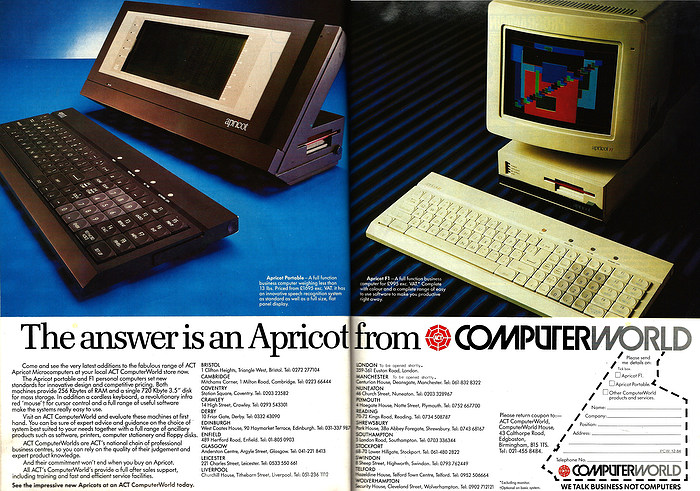 The answer is an Apricot from ComputerWorld

Applied Computer Techniques - ACT - had previously been importing the Chuck Peddle-designed Victor 9000, which was known as the ACT Sirius in the UK and before that were suppliers of Commodore PET software, through their Edgebaston-based subsidiary Petsoft[1]. Victor went bust in 1984, but ACT went to develop their own machines, including the reasonably-successful (at least in the UK) Apricot - a machine which was at number two in Personal Computer News's "Top 10 Micros above £1,000" in January 1985, at a time when the ACT Sirius (Victor 9000) was down at number 9[2].

The Apricot had been announced in Spring 1983 as part of a £6 million finance deal secured to pay for the micro's development. In May, ACT executives admitted that they didn't even have any working prototypes, but would have pre-production models ready for developers from June onwards. The press expectation at the time was for a January 1984 release[3], however ACT managed to beat that by getting the promised machine out by September 1983 - an impressively-quick development-to-launch time.

The advert shows the strikingly-designed Apricot Portable - not a portable in the laptop sense (or "lap-held" as at least Personal Computer World referred to that particular form-factor[4][5][6]) but something which could at least be picked up and moved around. The other micro on show is the Apricot F1 - a particularly compact machine which, although based on the Intel 8086 and running MS-DOS 2.11 wasn't actually fully IBM-compatible[7]. The F1, codenamed Rascal during its development, was positioned just below the original and more expensive Apricot in order to provide a lower-level entry in to the Apricot range. ACT even hoped to sell in to the educational market and take a piece of the BBC Micro's pie with educational establishments being able to buy the cut-down F1E for only £915. The F1E didn't come with any bundled software apart from a copy of Logo[8]. Both machines were unusual in using infra-red to connect their keyboards - ACT being confident that their infra-red link worked, despite the problems with IBM's PCjr which tried a similar idea but rapidly had to back-track and offer a wired keyboard. The desktop Apricot retailed for £1,145 (around £3,770 in 2021), whereas the portable retailed from £1,949 - £6,420 in 2021.

The original Apricot model, launched in August 1983, marked a complete turn-around in the relationship between Victor and ACT, as it was announced that Victor would now be making the Apricot for sale in to the US market, rather than the other way round - ACT and Victor having set up a joint company to handle the manufacture, even whilst ACT remained the European distributor of the Sirius[9]. The original Apricot was also the first 16-bit system that was offered for sale as being Sirius (Victor 9000) compatible, rather than the increasingly-ubiquitous IBM PC compatible - in Europe, where IBM had taken for ever to ship the 5150, the Sirius/Victor was for a while the most popular 16-bit micro around. It was also notable for being the very first computer to provide a test machine running Concurrent CP/M - the multi-tasking version of what had been the most popular business operating system since the 1970s. Finally, users were able to switch between different programs without having to save everything, close, find floppy, load and run. The preview version did reveal that many programs would nevertheless need updating to behave correctly under Concurrent CP/M-86, as there were still file-system bottlenecks caused by different programs sharing the same OS files and so blocking each other, or fighting over the same floppy disk drive[10].