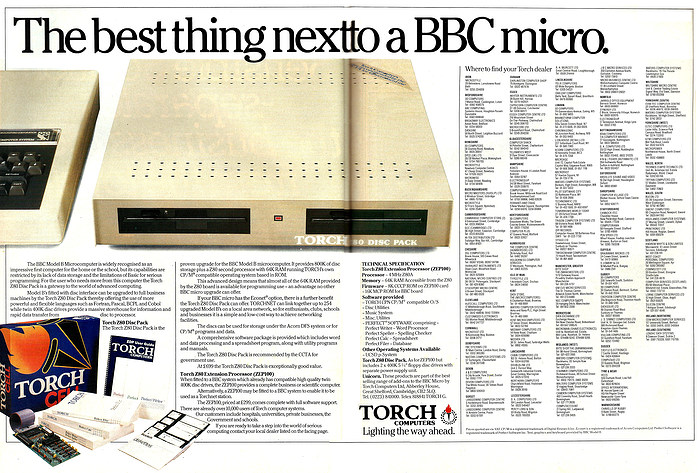 The best thing next to a BBC Micro

Available at around the same time as Torch's "Graduate" - a plug-in system for the BBC Micro which made it more-or-less an IBM PC (using the BBC as a keyboard and display), Torch's Z80 Extension Processor, or ZEP 100, was considered by Personal Computer News to be by far the better system for BBC Micro uses hoping to get in to business software[1]. The ZEP was intended for BBC owners who already had floppy drives installed, but for those who didn't, the Torch Z80 Disc Pack - a ZEP100 with twin 400K 5.25" floppies was also available, retailing at £699 (£2,300 in 2020 money). Both ran a Z80A and had 64K memory available and ran Torch's own version of CP/M, called CPN.

At about this time, Torch announced that it was setting up a network of computers at a pilot aptitude training centre at the famous former RAF base Biggin Hill. As well as the usual custom software packages, Biggin Hill had also ordered a range of computer games, including David Braben's legendary Elite, as published by Acornsoft[2].