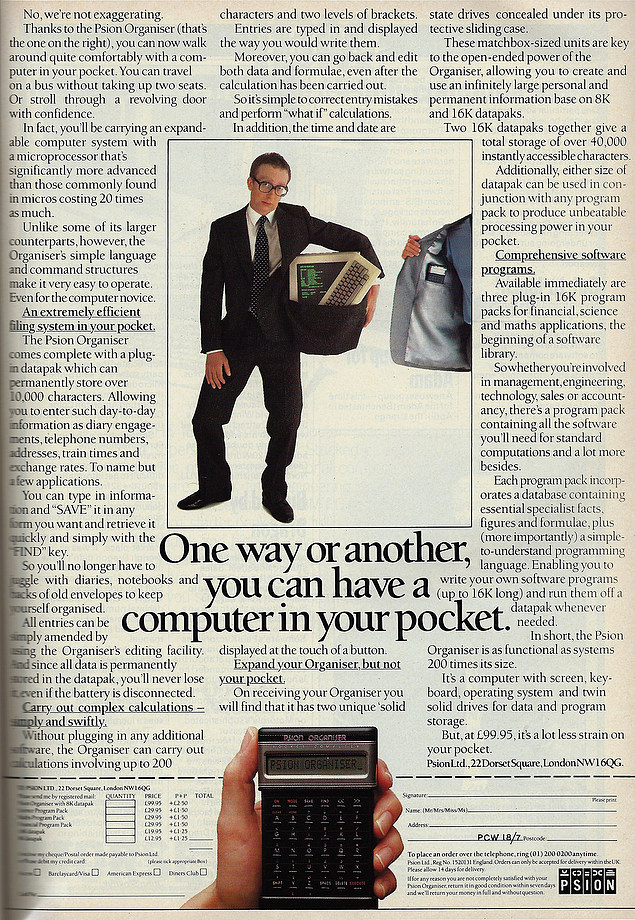 One way or another, you can have a computer in your pocket

Launched in the spring of 1984, the Psion Organiser, billed by Psion as the "world's first practical pocket computer" is considered as the world's first usable PDA[1]. Within a year the machine had found a niche in specialist mobile applications, for example as Medipak - a drug enquiry system containing data on 750 brand-name drugs and intended for use by non-specialist staff or the Wessex Material Computer, as used by quantity surveyors in the construction industry. The Organiser also spawned a range of add-ons, including barcode and credit card readers. The latter helped Psion to provide 3,700 modified Organisers to Marks and Spencer for use in a credit-card validation scheme. There was even a Forth development system, available for a snip at £500, compared to the retail price of the Organiser itself of a more reasonable £100, or around £320 in 2021.

Psion reckoned it had sold 2,000 Organisers within the first eight months since its release, with production running at 3,000 per month by February 1985. The company also had contracts "well in excess of £1 million", which Personal Computer News took to be a sign that Psion was beginning to move away from its strong connection with Sinclair[2].