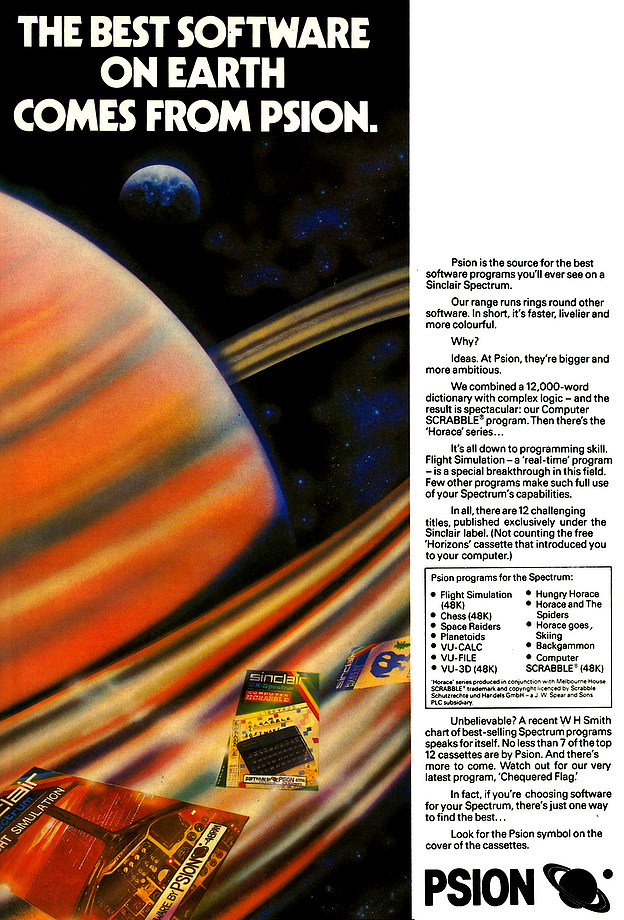 The best software on earth comes from Psion

Psion made its name as a software company writing mainly for Sinclair's machines, starting with the ZX80 and including the one featured in this advert - the ZX Spectrum. As well as the introductory cassette called "Horizons" that shipped with each machine, the company already had another 12 titles it was selling under the Sinclair brand. However, it had already been approached around Christmas the year before "with a view to developing material for [Sinclair's] new, professional, machine". This was the QL and would prove to be Psion's biggest deal to date, not least because it had been rumoured that both Digital and Microsoft and been approached.

Psion, although not very long established at the time, was, according to Managing Director David Potter, "an ambitious company". He continued "We aren't into producing specialist programs to keep legal records or patient dose rates. We wanted instead to be producing the fundamental software tools - the word processors and spreadsheets - a market dominated by the big US software companies". The end result of lengthy discussions with Sinclair was a complete software suite for the QL which "[took] the hardware to its limits" and "surprised Sinclair with what we [Psion] achieved". 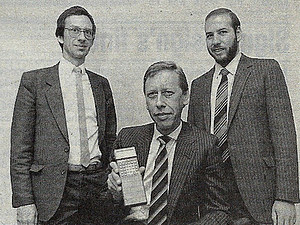 Psion's management team, including David Potter (middle) and Colly Myers (right), © Popular Computing Weekly, May 1986The work on the four packages was split in to, not surprisingly, four teams, with development of graphing package "Easil" headed by Martin Brown, the word processor "Quill" headed by Martin Stamp, Colly Myers looking after spreadsheet "Abacus" - which Myers said combined "the style of Supercalc with the power of Multiplan" - and Charles Davies with database package "Archive", said by Potter to be "probably the most powerful database program on any micro, full stop". Potter continued "The four packages are state-of-the-art products. Better, more powerful and conceptually more advanced than anything on any machine under £5,000"[1].

The QL itself was hideously late, finally shipping on the evening of Monday 30th April 1984, in the process making a mockery of its previous working title of ZX83. Within a year, Sinclair and Psion had released version 2 of the QL's productivity suite in an admission that the original had been somewhat flawed. If nothing else, the second version was advertised as running in machine code, a possible admission that version 1 had been written, at least in part, in Basic[2].

Colly Myers ended up as Psion's Managing Director before becoming founder CEO of Symbian, when it was launched in June 1998. He left Symbian in 2002[3]. Psion itself would launch the first of its famous Organisers in 1984 and continue through several variations, before moving in to other technology such as its range of Psion Dacom GoldCard PCMCIA modems in the latter half of the 1990s.