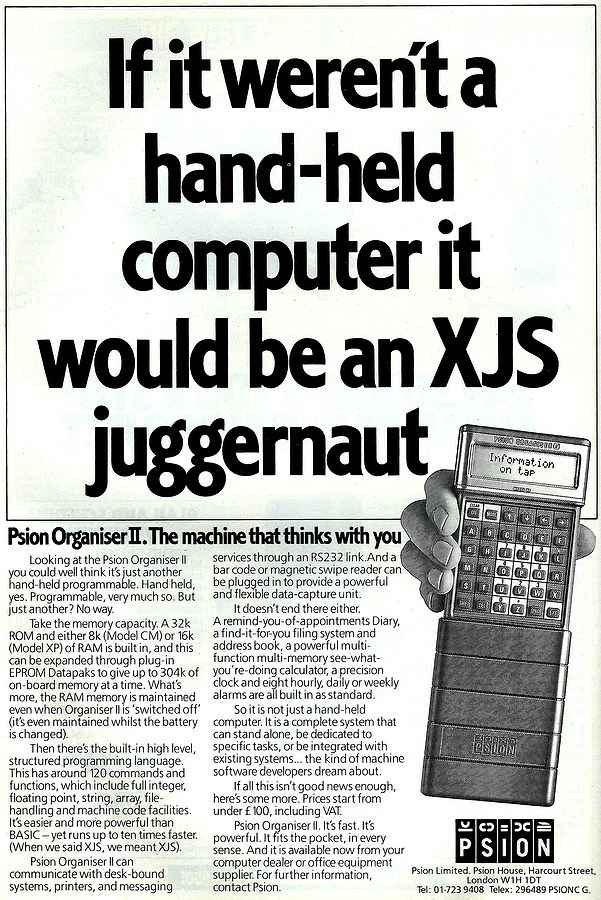 If it weren't a handheld computer, it would be an XJS juggernaut

Psion started out in 1980 as a producer of software for Sinclair's ZX80, and went on to produce many Sinclair programs - including a productivity suite for its ill-fated Sinclair QL - before moving in to hand-held computers, launching the Organiser I in 1984. The Organiser I wasn't hugely successful in the wider market but had already carved out something of a niche for itself in the retail sector, which Popular Computing Weekly suggested meant that the gadget couldn't just be shoved into the "technological weirdism category". It did however secure the odd significant success, including in February 1986 when the company signed a deal with Norwegian nutritional products company Nume, for £100,000-worth of customised Organisers in the role of "diet computers", the idea being that users would enter their age, weight and height and the software would calculate a diet programme to follow[1].

The follow-up Organiser II, launched in May 1986 and considered to be the first usable PDA[2], came with a 32K ROM and either 8K or 16K built-in RAM storage, as well as plug-in memory slots allowing up to 304K of storage. With a built-in "high-level structured programming language" (the Basic-like OPL, but which compiled to bytecode) and an on-board suite of programs, the Organiser II was quite successful, especially in commercial applications, with its RS-232 and barcode readers making it a popular choice for shop-floor data acquisition[3]. The Organiser II came in two varieties, with the entry-level 8K RAM, 24K ROM CM model retailing for £100 - £280 in 2021 money, and the 32K ROM version with RS-232, 16K RAM and mains adapter XP going for £139.50 (£410). Popular Computing Weekly's review of the II concluded that "As a remote data entry and retrieval device, it's certainly going to do well in the business market. But as a mass-market everyday utility, the humble jotter still has it beaten hands down and it'll take nothing less than a stripped-down, tarted up 'Organiser III' to change that"[4]. The XP was updated to 32K RAM in July 1987, following on from the updated machine's launch into the US the month before, whilst the price remained the same as before. Psion's David Potter reckoned that the XP was outselling the lower-specced CM by about three to two, and stated that over 140,000 Organisers would have been sold by the end of 1987[5] 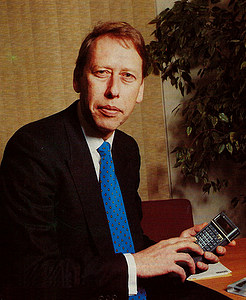 David Potter with a Psion Organiser, © Popular Computing Weekly, June 1989By 1989 Psion, with turnover of £19.2 million and a market cap of £40 million, had sold 300,000 of its Organisers with a rate of growth which chairman and MD David Potter suggested was "considerably more rapid than I would have envisaged". The machines had become especially popular amongst corporate users, with Debenhams, Benetton, NatWest, British Telecom, Virgin Airways and the NHS all professing to use the hand-helds. In an interview with Popular Computing Weekly in the June of 1989, Potter discussed the development of the Organiser, which had first started in the latter part of 1982. "The original concept was between myself and Charles Davies over lunch. We were wondering about tying up what were at that stage very expensive 16KB computers such as the Sirius and the IBM PC for simple database activities and thought there must be a cheaper, simpler and portable solution for the more simple tasks and this is what we set out to do".

Psion decided to drop out of its core software market and diversify during 1984 because of concerns about long-term security, which was not surprising as micro companies were failing all over the place and the 8-bit market was saturated. It was still a good time for smaller "DIY" manufacturers, or as Potter said "We were generating turnover rapidly and profit quickly, the entry time was short and the cost of entering that kind of business was relatively low. If it was low cost and low entry for us, it would be so for other people, so the competition would proliferate and profits would fall, until it was a real mean market". Despite that, it was nevertheless planning something of a return to games software in 1989, although not in the arcade-style market, instead Potter expected a move into "the more sophisticated or complex side of things because the entry level there is longer".

In the March of 1988, Psion had floated on the Unlisted Securities Market, raising much-needed capital for expansion. As well as this, it also went on a minor acquisition spree, picking up Dacom Systems - a manufacturer of data communications equipment - in January 1989. It also donated 1% of its pre-tax profits to charity every year and revealed that it had previously been the number one PC supplier in South Africa, but had sold the whole lot to ICL when the politics became a bit too much[6].

Psion went on to produce several more handheld computers, including the Psion 5 and the Netbook. The operating system that ran on these later ("SIBO") devices was called EPOC. It became known as Symbian when Psion Software became Symbian Software - a joint venture between Nokia, Ericsson and Motorola. Symbian was known for its impressive battery-handling and radio capabilities - although Series 40-based feature phones like the 3310 could seemingly go for months without charging, early Symbian (S60) devices like the N95 - the first smartphone - could still run for a week on a charge. However its attempts to update the Series 60 UI ended up as just a load of cruft and even worse attempts to bolt on touch handling in the face of the iPhone and Android devices were a disaster. Symbian was sidelined in 2011[7].