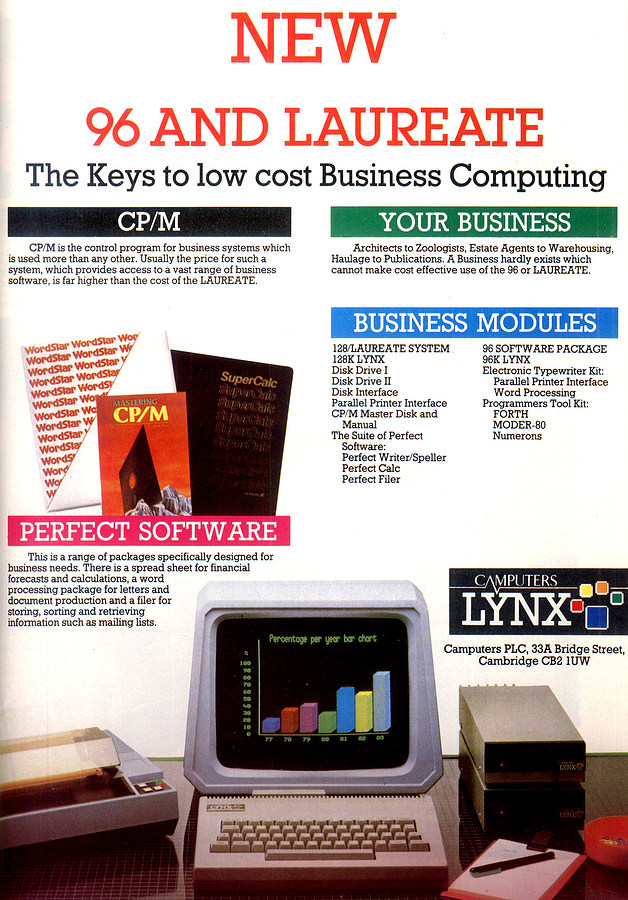 This is a bit of an odd advert. Published only a few months before the company went bust in the summer of 1984[1], it doesn't really say anything about why you would want to buy either of the machines (the 96 referred to an update of the original 48K Lynx and the Laureate was a re-branded version of the the same machine's 128K model) or indeed say anything about the machines themselves, so perhaps with advertising like this it's not much surpise that Camputers were thought to have only sold around 30,000 units[2] before folding. The machines did live on though - in 1985 there was even a Lynx User show in Birmingham - thanks to a user group who had secured permission to continue developing them[3].

The writing seemed to be on the wall for Camputers by February 1984, when the company announced that it was no longer selling the 48K Lynx through High Street shops. The £225 machine had not been selling, and so it was withdrawn and was subsequently sold by mail-order only under the new name of Lynx Leisure, albeit with a £65 discount on its then-current price. The 96K machine was, for the time-being, still being sold at branches of Dixons, Laskys and Spectrum[4].

Camputers' financial crisis was said to have been precipitated by poor UK sales, even though the machine sold reasonably well in France and Scandinavia. The company convened a meeting of creditors on the 8th June 1984 and had already made 24 employees - more than half its staff - redundant in the week of the 24th May, although it was continuing to trade. Managing Director Stanley Charles said "The company has been seeking additional finance for some time and while one party has expressed an intent to ensure that the Lynx will continue, no firm offer has been made". He continued "It is the desire of the directors on everyone's behalf that owners are found for the project in the period between now and the creditors' meeting". Meanwhile, Camputers' Technical Director Geoff Sore added "In my opinion, the Lynx will continue - the project isn't dead yet". There were already rumours that a firm offer had been made through the company's solicitors Turner Kenneth Brown, however Camputers' directors were clear that there had been no such offer[5].

By all accounts, the creditors' meeting of the 8th of June was a stormy affair, as chairman Charles repeatedly resisted calls from the company's largest creditor to even appoint an independent liquidator. Things were resolved when it was agreed to actually appoint two, one of Camputer's choosing and the other, from accountants Cork Gulley, who was chosen by the remaining creditors. As well as the two liquidators, a separate "committee of inspection" was appointed to oversee the winding-up of the company. At the meeting it was also revealed that Camputers had total debts of £1.8 million, although conveniently over £880,000 was due to - effectively - itself, in the form of Camputers PLC, with the remainder owed to various "trade creditors". The company didn't seem to have much in the way of assets, offering an estimate of just over £94,000[6]. There were more rumours of a buyout a few months later, when in September it was announced that receiver Hacker Young was in the final stages of negotiation for a sale and that the company was about to exchange contracts with a new buyer, said to be paper manufacturer Spicer[7].

Just before Christmas 1984, after seven months in receivership, Camputers' assets - and the rights to the name "Lynx" - were eventually purchased by Anston Technology. Anston announced in the February of 1985 that production of the 128K "Laureate" Lynx was to restart at the previous manufacturers Chapman Brayfield in Cambridge and Parc Electronics in Wales, along with a new 1MB disk drive and a general reduction in prices to more competitive levels, including £100 off the cost of the Laureate. The previous 96K and 48K models were not to be part of the resurrection, although the new owners pledged to maintain full support of existing owners, at least in terms of software and peripherals. Camputers' rumoured new computer, with a built-in 3½" floppy, that the company had been working on when it went in to liquidation was also not immediately part of the plan, with former chairman of Camputers and Anston's head Dick Greenwood stating "We are looking at the possibilities of the new micro, but it is not at the top of our list of priorities"[8].