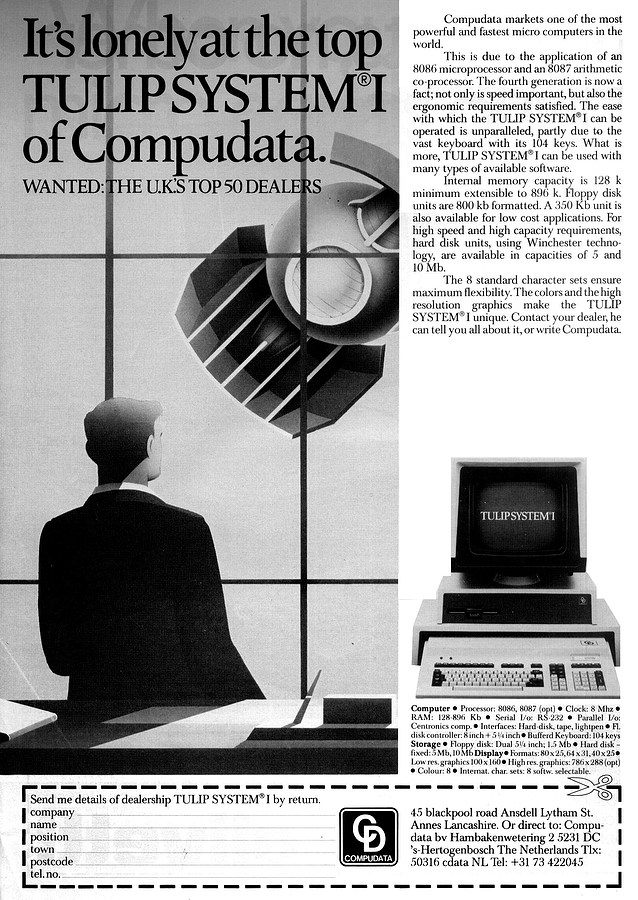 It's lonely at the top: Tulip System 1 of Compudata

Founded in 1979 as Compudata, Tulip Computers is worth a mention for a couple of reasons. Firstly, when Exidy stopped manufacturing the Sorceror micro that Compudata had been importing in to Europe from the US, it didn't just give up on it and move on but licenced the design and built them in the Netherlands (where the Sorceror had been particularly successful) for several years, up until 1983. Secondly, it bought the Commodore brand-name in 1997, three years after Commodore had gone bust, even launching some Commodore-branded games systems in the mid 2000s.

The advert features the System 1 - a machine which was 100% compatible with the IBM PC on account of Tulip having literally copied the IBM, right down to the BIOS. IBM clearly hadn't been too impressed by this, and was taking Tulip to court in the Netherlands over its infringement, even though the press was reporting that by this time Tulip had switched to a different BIOS chip. IBM's vice-president of personal systems, V Danianai reckoned that this switcheroo was "irrelevant" and that IBM would do all it could do to vigorously defend itself against infringement[1].

As well as the almost-identical IBM BIOS, Tulip's machine sported a true 16-bit CPU in the shape of an Intel 8086 as well as an 8087 maths co-processor - a trick that improved the perception of processor speed and which continued to be used right up until the introduction of the Intel 486DX in the mid 1990s. It was also faster, at 8MHz, than the IBM XT, which had been released just a few months before[2].

By the end of 1987, Tulip was on its third attempt to crack the UK market, with a launch of IBM-compatible PCs at the Personal Computer World Show. Tulip - which considered itself as "the second-biggest computer company in Benelux" - thought that it had been difficult the previous two times because the UK, apparently unlike the rest of Europe, "was a price-sensitive market". The company had the stated aim of dominating the Tandon/Zenith sector, or in other words other IBM-compatible builders, rather than Big Blue itself[3].