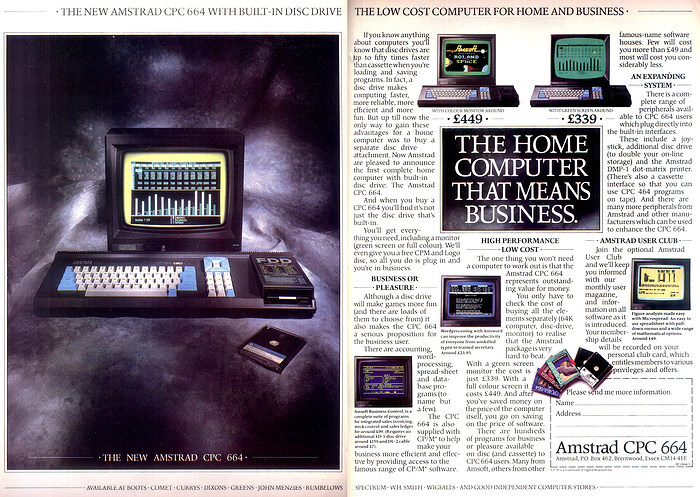 When interviewed about the upcoming Atari ST, former Commodore founder and all-round legend Jack Tramiel said "Home computer? I never heard of it - I make personal computers"[1]. It was a theme common at the time, as the home computer market had become saturated and former dominant companies like Sinclair - weighed down with unsold QLs, Acorn - £47 million of debt including a loss of £10 million trying to crack the US market[2] and Commodore - losing $1 million per day - were in trouble, so they and the companies that remained were gradually shifting emphasis on to the business market. None more so than Amstrad, which had come out of nowhere in 1984 from a background of cheap-and-cheerful home electronics, TV and hi-fi to buck the gloomy trend by posting record turnover and profits of £20 million[3] (about £62 million in 2021 terms). Amstrad's success, at least in part, was an initial focus on the European market rather than trying to break America early, as both Acorn and Sinclair had tried and failed to do. In fact it was said that it had been Alan Sugar's intention to specifically keep the temptation to go the US at bay, saying "I won't go there", although he did make available a CP/M version of the CPC 6128 for the American market.

This advert is for the CPC 664 (Colour Personal Computer, series 6, 64K memory), which retailed for a highly-competitive £449 (£1,400 in 2021), which included the monitor and an integrated floppy disk drive (a proper one, albeit a 3" version, rather than Sinclair's ill-fated and widely disliked Microdrive). The machine was part of Amstrad's campaign during 1985 to move the market towards floppy disk storage, rather than cassette, with Amstrad's William Poel saying "We're trying to create the image that cassettes are a very bad medium for data storage and software. The peculiar British passion for cassettes has strangled progress in this area". And like the earlier 464 micro, which by the launch of the 664 had sold at least 200,000 units, it was aimed at - in Alan Sugar's own words - "The truck driver and his wife". The machine also made an appearance in the US when it was first shown at the Summer CES in Chicago, although its US price of $799 put it up against Atari's 68000-based wonder-machine the 520ST. Atari and Commodore were the only other home computer manufacturers at the show, which was the smallest for five years[4].

However, all was not roses as Amstrad's aggressive development schedule meant that this machine was replaced only a few months later by the CPC 6128 - the 128K model which wasn't directly backwards-compatible as the BASIC ROM was different. Sugar originally denied that the 6128 would appear in the UK before the end of 1985, but it was rumoured that ships loaded with 6128s had left the Far East by July 1985[5], only a month after this advert appeared. DK'Tronics was quick to market to offer a partial rescue, with an extra 64K memory module for the 664 for £50 (£150)[3], but there were lots of angry complaints from 664 owners as many had been waiting for promised mini-CP/M software which was now highly unlikely to appear now that software houses had a new target. To make matters worse, Amstrad refused to offer a 128 upgrade for the older machine[7].

This blow-back wasn't quite what the head of Amsoft - William Poel, who once compared "Amstrad the Real Ale to MSX the Keg Beer" - had in mind, as he'd been reported a few months before (after the launch of the previous CPC464 model) as suggesting "One of the things we have always said with regard to home computers is that we are committed to the idea of portability. We're not going to bring out a new machine which immediately makes the old one redundant". He continued "When we bring out a new machine, we want all the existing software to run on it without any problems. And we've never said that the CPC464 is Amstrad's sole contribution to the home computer market"[8].