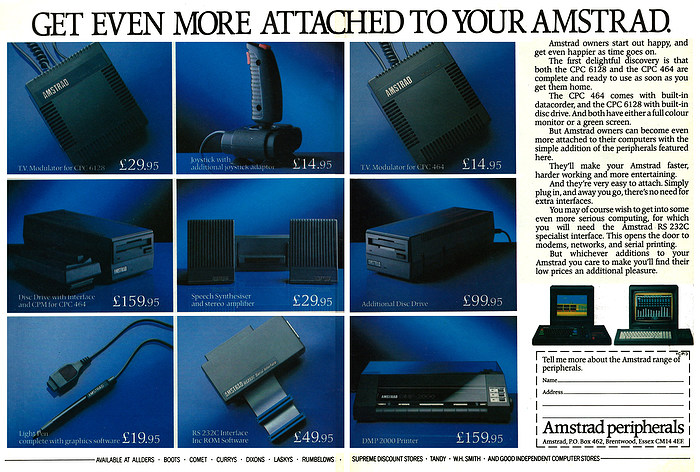 Get even more attached to your Amstrad

Many computer companies of the time seemed to be happy to rely on third parties to produce peripherals for their machines, particularly Acorn who were famous for their long timescales in developing anything beyond the BBC/Proton[1]. Sinclair had produced the Interface 1 and 2 as well as Microdrives (the Interface was a requirement to plug in a Microdrive, which the advert has a dig at), a modem and the ZX Printer, but they at least had a whole ecosystem of hundreds of companies producing everything else, not least real keyboards for the ZX80, 81 and Spectrum. Commodore put in a reasonable showing, producing more than most with floppy disk drives, joysticks, modems and printers but Amstrad raised the bar by seemingly producing everything going, with their background in consumer electronics seeming to really show through. This advert even includes a CP/M disk-drive module, much like the ZEP-100 produced for the BBC by Torch, as well as light pens, a speech synthesizer (Acorn did produce a voice synthesizer in the form of a plug-in chip, featuring the voice of newsreader Kenneth Kendal), an RS-232 interface, joysticks and a proper printer.

Perhaps it wasn't so much that other companies didn't produce all this stuff for their micros, as many did over time, but that Amstrad seemed capable of making them available seemingly all at once for each of their new machines. It's no wonder they were about the only micro company making profits in 1985[2].