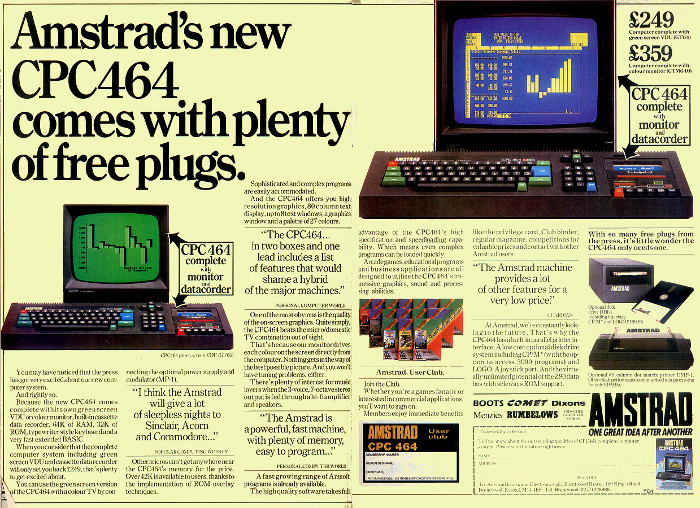 Harking back to the early all-in-one computers of the late 1970s (not least the very first - 1977's Commodore's PET) comes Alan Michael Sugar Trading's - Amstrad's - first in a range of Colour Personal Computers that went on to sell around 3 million units - the CPC 464. Designed by Ambit International of Brentwood[1] and with BASIC by Locomotive of Dorking, for £249 (about £820 in 2021 terms) with a bundled green-screen monitor which also acted as the main computer's power supply, or £359 (£1,180) for the full-colour version plus an integrated cassette for storage, the CPC464 was certainly competitive.

First announced in April 1984 and expected to by shipping in June of the same year, the CPC 464 ran a Z80A at around 3.3MHz. Amstrad's machine was originally expected to run the 6502[2], as it had been envisaged as an "improved VIC", but the target evolved over time: it was then considered as a potential competitor to the much-feared MSX invasion, but here it would have ended up competing with another 20 idential machines, before it became a Z80 - a choice that wasn't exactly cutting edge but which played to Amstrad's strengths, which were to take "the best features of rivals and almost none of their mistakes". Originally code-named Arnold, it was rumoured that its official name was to have been the CPC64, but that Commodore's announcement of its 264 and 364 machines inspired Amstrad to "go one better", hence the CPC464[3]. It had 64K of RAM, of which 43K was available to the user and 32K ROM, along with an 80-column display and Hitachi's 3" disks. These were low cost but also low capacity and required the user to physically flip them over to use the other side[4]. Thanks to being a Z80 machine it could even run CP/M business software, but it also included Locomotive BASIC - an enhanced version of the Microsoft standard found on most home computers of the day - to satisfy the home market.

When it was announced, Amstrad was planning a restricted launch of just 1,000 machines in June - a deliberate policy to restrict volume in order to let software companies and peripheral manufacturers get a bit of a head-start - before it fully launched in September, with an expectation that it would ship 200,000 machines by Christmas, all of which had already been committed to by major High Street retailers, including Boots, Dixons, Comet and Rumbelows. The machines shown at the launch were already running production ROMs, meaning that the company managed to avoid one of the major bottlenecks that often de-railed other micro launches and so actually released its machine when promised. The '464, manufactured in Korea, was launched simultaneously in the UK, France and Germany, with Amstrad leaving alone the perils of the US market[5], at least for the time being.

In an editorial, Popular Computing Weekly prophesied that the Amstrad could change the face of the UK micro market, suggesting that it could "undoubtedly affect those companies which are already losing their share of the home market, notably Camputers and Dragon. It could also hit Sinclair's still-invisible QL, particularly as an Amstrad disc drive should make its debut soon". It also accurately predicted that "Commodore, Sinclair and Acorn will suddenly find themselves faced with their first real outside competition"[6] - true enough as all three went through major financial crises in 1985, which one of them wouldn't survive. Andy Pennell, writing in a review of the 464 went on to say that "Amstrad will give a lot of sleepless nights to Sinclair, Acorn and Commodore, and nightmares to Memotech and Enterprise/Elan. I think it could turn out to be what the QL could, and should, have been - a terrific home micro with an awful lot of potential as a business machine. Those, including myself, who said that the QL was going to be Micro of the Year could prove to be rather short sighted"[7].

The BASIC (Beginner's All-purpose Symbolic Instruction Code) language itself, first released in 1964, had celebrated its 20th anniversary earlier in this year. Written by John Kemeny and Thomas Kurtz of Dartmouth College and originally targetted at education, the widely-derided "enfant terrible" of programming languages nevertheless became the de-facto standard of most home micros of the era, because of its inherent simplicity and English-like style. However, an attempt was made to fix the shortcomings of the language with the founding of True Basic Inc, part funded by ex-Dartmouth students and three professional programmers as well as Kurtz and Kemeny. The new version, expected in Autumn of 1984 and which was hoped would become "the new standard in personal micros", was to provide portability and improved structure - something that Acorn had already proved possible with their much-improved version of BASIC as used on the BBC Micro. However, Personal Computer News doubted that even this would prove much of a challenge to Microsoft's dominant version[8].

Meanwhile, reviewed in the June 1984 issue of Your Computer, Simon Beesley wrote "[the] CPC-464 boasts graphics which are superior to those on any other micro in the price range, whilst its sound is matched only by the BBC Micro and the CBM-64. Making use of these features is facilitated by an extensive and well thought-out BASIC; the machine seems assured of success"[9]. Indeed, in March 1985 the CPC 464 was voted "Computer of the Year" by the Computer Traders Association, by which time Amstrad was making £9.5 million profit on sales of £69 million (about £210 million in 2021). Support was growing for the machine, with manufacturers producing plenty of add-ons and versions of Spectrum games, making the 464 look something like the BBC Micro[10]. It was already up to 4th place in Personal Computer News's "Micros below £1,000" chart[11], and was poised to move even further up with all the extra hardware and software on the market.

It was all perhaps a bit unexpected. When the CPC 464 was first announced it looked doomed, launching with a 1975-era Z80 processor in the face of the imminent 32-bit 68000 revolution. However, the failure of Sinclair's 68008-based QL - released too early, not just because it wasn't ready but also because the market didn't quite seem ready for 16- or 32-bit micros - seemed to leave a gap which Amstrad exploited to the full. When Sinclair should have been coming out with a decent 128K machine, all it had was the rather uninspiring Spectrum Plus[12].

In 1985, Amstrad's CPC 464 was reported in an AGB Cable and Viewdata survey to be holding 8% of the micro market by itself, at a time when Sinclair still ruled the roost at 36%, although that marked a drop from 45% the previous year. Commodore was at 27% whilst Acorn had increased its share to 22%. The signs of saturation were still present though, with the report also showing that 43% of people had bought their micros over the last 12 months but that only 7% of non-micro-owning households expressed a desire to buy a computer. Sadly for those still trying to promote computers as a learning machine, over 55% of people in the same survey thought that the main application for micros was playing games[13].