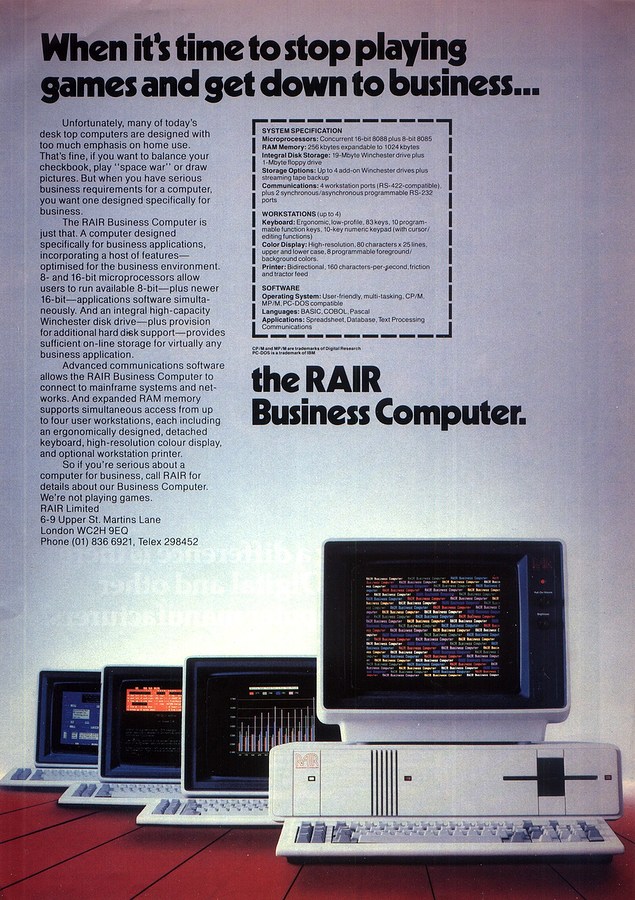 RAIR: When it's time to stop playing games and get down to business

RAIR by name and rare by nature, if the lack of information about either the machine or the company (apart from at oldcomputers.com) is anything to go by, although they did appear to start out as systems resellers, judging by news items in the press - for example, in June 1979 they were selling the DECWriter IV printer as well as DEC's terminals and the Hazeltine H141D terminal - available at a snip at £640, or £3,580 in 2021[1].

The tone of the advert might be a reaction against the obsession at the time with the 8-bit home computer market, which at the time was reaching its zenith, or it could equally allude to the fact that this machine was capable of supporting up to 4 colour terminals attached to it, which would potentially make it a useful-enough business system. However, some commentators questioned the merit of buying a multi-user system like this when it was often a lot cheaper to just buy the same number of single-user micros. Guy Kewney of Personal Computer World wrote of the Motorola 68000-based "Sage II" system in December 1982's issue that "there are a bunch of ignorant lunatics who will buy such things because they see multi-user minicomputers costing £15,000, and the multi-user micro at £8,000 looks like a bargain by comparison"[2]. It was also one of several hybrid machines which were around at the time, as it featured both a 16-bit 8088 as well as an 8-bit 8085, in an attempt to appeal to potential buyers who already had a large stash of or wanted to use CP/M software, as well as the new (soon-to-be-dominant) 16-bit IBM PC format, either running MS-DOS or the CP/M update CP/M-86 or maybe M/PM. There's no price on the advert, but the fact that it includes a 19MB Winchester at a time when a 5MB external drive had only just broken the £1,000 barrier hints at how expensive it was likely to have been (probably around £8,000 if Guy Kewney's previous comment was anything to go by). 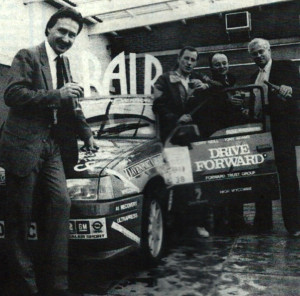 RAIR's Nick Flowerdew (left) welcomes back the RAIR-sponsored Mk. 2 Astra at Dover. © Personal Computer World January 1987Elsewhere, RAIR's previous machine - the RAIR Black Box - was still doing the rounds in the guise of ICL's personal computer, to which it had licenced the internals, and the company was still helping ICL out in developing its product range. Perhaps this included ICL's upcoming range of DRS (Distributed Resource System) modular computers, but there were also rumours that ICL was working on something to take on Apple's Lisa. This was something of an easy target as the Lisa was retailing for a truly-staggering £8,500 (about £29,300 in 2021 money), so even behemoth and supplier-to-governments ICL reckoned they could undercut it by £2,000[3].

For a while, some commentators in the press, in particular Guy Kewney of Personal Computer World, seemed to hold out hope that RAIR might have become Britain's leading micro company, until founder[4] Mark Potts took his company more in to the multi-user business instead. Despite RAIR bucking the trend, Prudential Assurance still put £1 million of equity in to the company - said by Personal Computer News to be "one of the UK's best-established micro makers" - in August of 1983, with money coming from the Merchant Navy Officers' Pension Fund. At the time, pension funds were regularly raided to raise investment capital, with Prudential having previously used the National Coal Board's pension fund to buy in to Dragon[5].

As well as the injection of capital from the Pru, RAIR was building up its dealer network and spinning off its terminal business as RTS Technology. RTS was to take on the competition from companies such as Hazeltine (whose products RAIR had previously been supplying back in 1979), TI, Centronics, Qume and IBM. The MD of the new company - Bob Mountain - said "RTS intends eventually to sell complete systems, not necessarily built by RAIR"[6].

RAIR was still around in 1987, where Personal Computer World referred to its sponsoring of a car in the annual Beaujolais Run from Villefrance to Dover, where RAIR's marketing director Nick Flowerdew was on hand to welcome the drivers back as they crossed the finishing line. This was an event which bought back immature and often undrinkable first bottles from that year's vintage to be sold to yuppies in fashionable wine bars at over-the-odds prices. Needless to say, it was all the rage in the 1980s. Personal Computer World grumbled that although they appreciated RAIR sending them a photo of the event, they were upset that their "bottle of plonk" must have gone missing in the post[7].