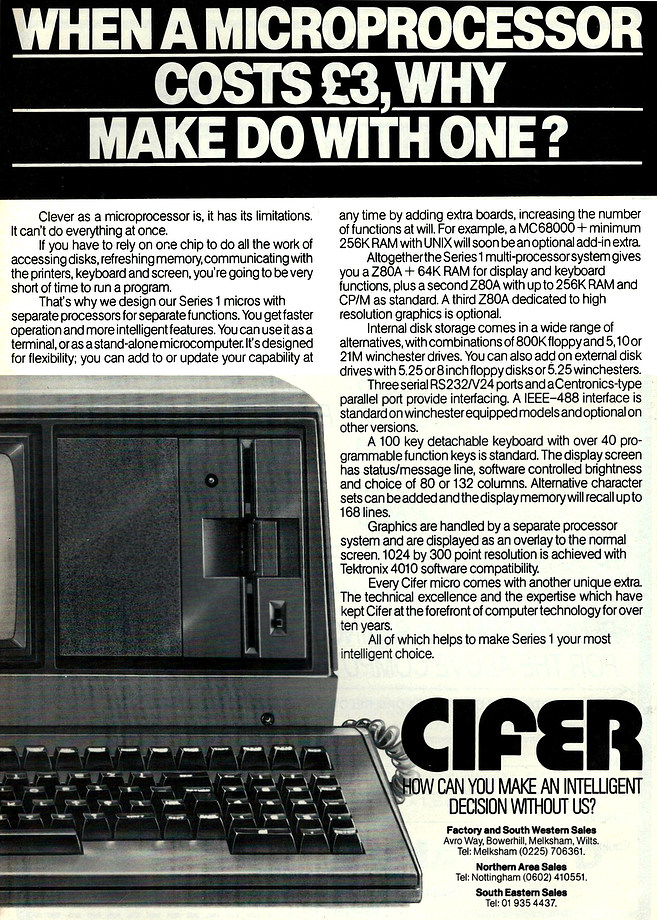 Cifer: When a microprocessor costs £3, why make do with one>

The Series 1, from Wiltshire-based Cifer, a company with a "bread and butter business in terminals" and a turnover of £8.2 million in 1983 (£27 million in 2021), was another random entry in the list of multi-processor machines, offering up to three on-board Z80s - one for the display, one for CP/M and an optional third for hi-res graphics. As well as that, an MC68000 board was "coming soon". The machine also offered a fairly unique Tektronix 4010 software-compatibility, so together with its 1024x300px graphics it seemed aimed at the CAD/CAM/workstation niche. Not only that, but according to the advert, Cifer had been "at the forefront of computer technology for over ten years".

When the 68000 boards became available in July of 1983, Cifer became the first British micro company to offer a working implementation of Unix, with an initial announcement in May followed by commercial deliveries starting in September. Cifer's Peter Readman stated "We are very aware that you can't just offer a Unix machine. 40% of the effort of producing the Unix system had gone in to finding software - compilers, database management systems, word processors and some applications - to run on it. There's a lot out there if you look in the right place"[1]. A Cifer Series 1 with an 800K floppy drive, 10MB hard disk, System III Unix and the 8MHz MC68000 card with 256K memory to run it on racked up at close to £5,000 - about £17,200 in 2021.

Cifer underwent a reorganisation in June 1984 and again in March 1985, when it shed 88 employees and announced that it indended to concentrate on its terminal business[2].