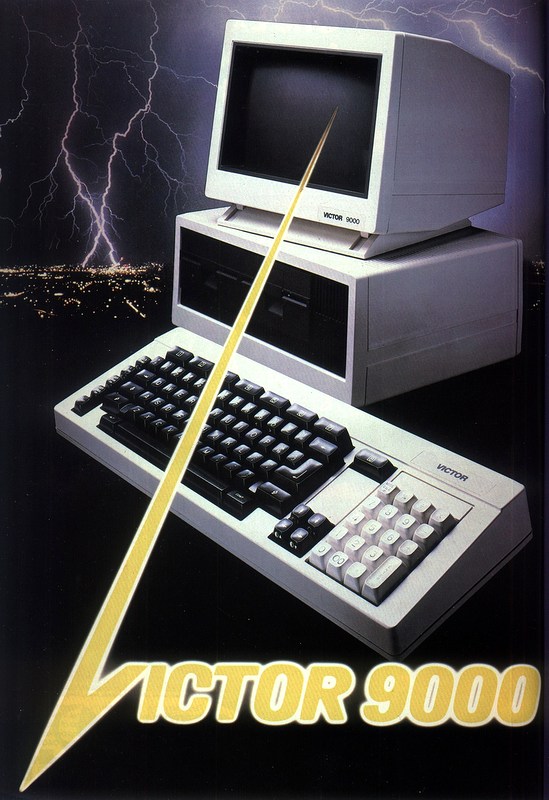 Lighting and sensitive electronics is always such a great combination, and it's used to the max in this advert for the Victor 9000, a machine which was meant to have been a US-only version of the Sirius 1, the latter launching only in the UK. However, some nine months after its launch in March 1982, it was being "second sourced" through UK distributor DRG by the company that had originally provided backing and built the machine in the first place[1] - Victor Business Products Incorporated. Victor was in turn owned by Kidde Incororated, which was also an investor in Peddle's Sirius Technology Systems[2].

This tangled set-up meant that there wasn't really a lot that ACT could really do to keep the original Victor version out, and the confusion didn't go un-noticed. Guy Kewney wrote in November 1982's issue of Personal Computer World how Chuck Peddle had sold the distribution rights for the Sirius 1 to Victor in the US, where it was branded as the Victor 9000, with the intention of selling in Europe through ACT as the Sirius 1.

However, at the Hanover Fair in Germany, Victor showed up with the US-styled 9000, then at the Personal Computer World Show, micro-dealer DRG also appeared with the 9000, announcing that it would offer better terms to dealers than ACT was. Shortly afterwards, software distributors TABS had its relationship with ACT and Sirius "terminated" after it had the temerity to appear at the same show with the 9000 on its stand[3]. 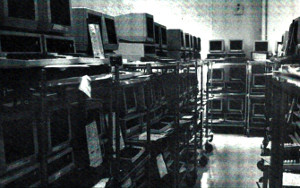 Racks of Victor 9000s under testCo-designed by 6502 legend Chuck Peddle - who had left Commodore in October 1980 at least partly because he disagreed with Jack Tramiel's decision to concentrate on home computers instead of business machines - the Victor/Sirius was considered an excellent machine, with a minimum of 128K and up to 896K memory, which compared well to the IBM's 16 or 64K.

As well as 800x400px graphics (IBM's early standard of CGA was only 640x200 pixels), it even had a hard disk as standard. This was at a time when Microsoft's operating system - MS-DOS - didn't actually support hard disks, as Bill Gates couldn't see the point[4]. Sirius/Victor had to come up with its own extensions in order to support its hard drive, which were given back to Microsoft and incorporated in to MS-DOS 1.2.

The company had first-mover advantage in Europe, so the Sirius 1/Victor 9000 sold particularly well there - outselling the IBM for a while. It didn't last long though. IBM released the improved IBM XT only a few months later in March 1983, allegedly as a direct repsonse to the Victor 9000, at least according to a reference at oldcomputers.net[5]. Even so, as late as August of 1983 the Sirius was still trading places at the number 1 spot on the Personal Computer News hardware "over £1,000" charts with the original IBM PC[6].

Towards the end of 1983, a portable version of the Sirius 1 was announced. It was software compatible with the original Sirius/Victor but used Intel's newer 8086 16-bit chip instead, as well as offering 256K RAM over the original's 128K. Said to have been around the size of a "small sewing machine" and offering a built-in 9" screen, its price was pitched at just under that of ACT's own Apricot "transportable" micro.

At the same time, there were rumours of a Sirius 2, using Intel's 80186 or '286 chips[7]. The 80186 never seemed to see the light of day, with a hint in Personal Computer World that it suffered from ongoing production problems.

Sirius had bought out the original Victor's share at the end of 1982. It kept the Victor name but retained the original Sirius logo as the "o" of Victor[8]. Chuck Peddle became president[9], but the company went in to Chapter 11 bankruptcy protection at the end of 1984. Peddle moved on to Tandon Computers, which was - somewhat ironically - Europe's biggest producer of IBM clones, at least for a while. ACT eventually entered the micro market with its own computer - the ACT Apricot - in July 1983.

Meanwhile, in late summer 1983, Victor Technologies, which had still been building the Sirius, underwent some severe cutbacks, reducing staffing levels by 40% or 1,200 jobs following heavy losses earlier in 1983. ACT's Managing Director, Roger Foster, said "Victor had expanded so fast it had developed too many overheads too quickly", although Victor blamed slack business in Europe for its cashflow problems.

Victor's "unweildy distribution network" also caused ACT to "look elsewhere" to handle some of its Apricot business, the American launch of which was due to take place at Comdex, Las Vegas, in November 1983, with production expected to be "in full swing" by January 1984[11].

The relationship between ACT and Victor Technologies, which had been considered to be a profitable one, had soured by the end of 1984. Victor had applied to have the ownership of the Sirius name transferred to itself, with a request that ACT should be prevented from also using the Sirius name, except where it referred to Victor's own products.

In the meantime, ACT filed a counter-action to stop Victor from using the Sirius name. As it transpired, ACT had actually acquired the rights to the "Sirius" name from none other than ICL - the UK's part-nationalised computer behemoth - and was using it to sell the computer that was otherwise known as the Victor 9000 everywhere else in the world.

ACT, meanwhile, had been selling Apricots since the summer of 1983 and was naturally promoting them in preference, with sales of the Victor 9000 slumping to about 100 a month as a consequence. Victor had just been rescued from bankruptcy and was keen to rejuvinate sales in the UK, so it had taken over distribution and wanted to get sales moving again, with obvious advantages to trying to keep hold of the well-known Sirius name. By the beginning of 1985, it was looking like an out-of-court settlement might be reached.[12].