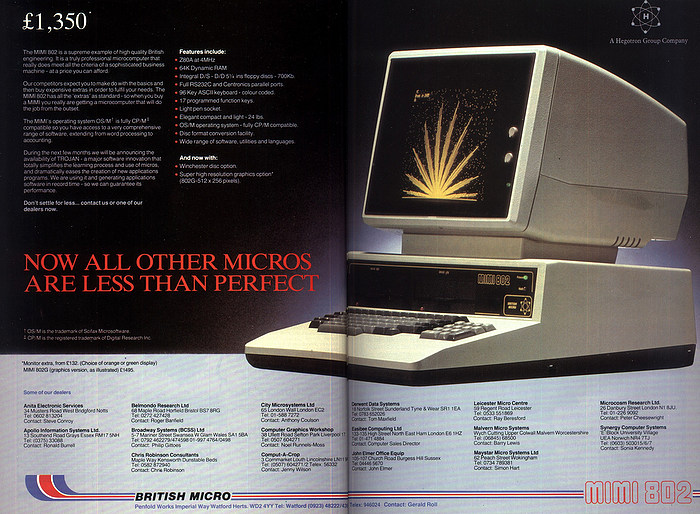 British Micro: Now Other Micros Are Less Than Perfect

At first sight this is another obscure entry in the who/what/where department, however British Micro actually originated from more famous stock, founded as it was by John Marshall and Manas Heghoyan, both formerly of Nascom (the latter having bought Nascom in 1980 in order to rescue it). Heghoyan had named his burgeoning empire Hegotron Group and the British Micro operation was based at Penfold Works in Watford. The company's Mimi 802 was a OS/M-running (fully CP/M compatible) Z80A-based micro with 64K memory and was first released in 1981[1]. Its overall design owes a debt to 1977's Commodore PET, with exactly the same off-white upper and black lower case construction and a monitor with a black bezel perched on the top, although the material of manufacture has moved on from the PET's steel to plastic. Such was its design that the Mimi was even featured in a six-week-long display at the London and Glasgow Design Centres[2]. It had integral 700K double-sided double-density floppy disk drives with a colour-coded 96-key keyboard and at 24lbs (a little over 10kg) in weight, was apparently "compact and light".

The advert also announced the availability of "Trojan", developed by software company Scifax. This was a revolutionary program-generating language, due for release as soon as the manual had been completed (expected late summer 1983). The company's first home-grown software - Trojan Sales Ledger and Trojan Purchase Ledger - was released in May, with Nominal Ledger due a month later. Trojan retailed for £250 (about £860 in 2022) and supplemented the existing Cashfix spreadsheet, released in April and which sold for £120 (about £410)[3]. Trojan re-appeared a couple of years later on the IBM PC. Still developed by Scifax, which had since been taken over by media mega-corp BMG, the price of Trojan had doubled from its previous Mimi price of £250 to around £500. MD of Scifax Howard Lock-Hooper said that "we've added more applications including Bought Ledger, Word Processing, Stock Control and Video-tape hire management. But the real reason for the price difference is that as part of BMG we feel we ought to give our partners a boost"[4].