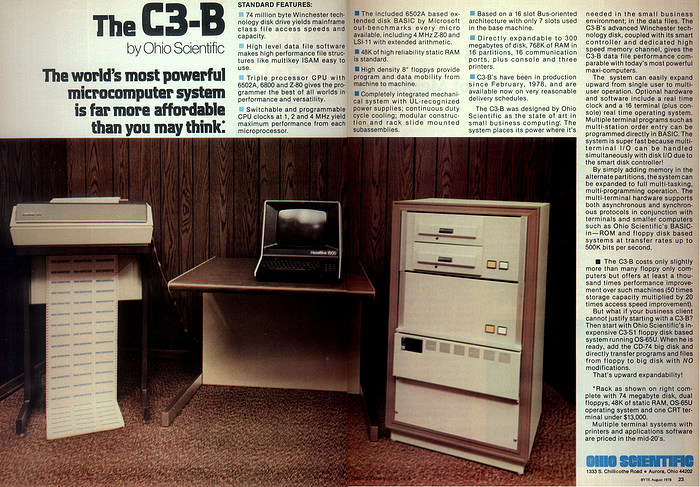 Formed in 1975 in Hiram, Ohio but by 1978 based in Aurora, Ohio Scientific had started out producing a small 6502-based single-board computer called the Superboard. The C3-B of the advert was a version of their Challenger series of computers, which was based on the company's Superboard II. It was a multi-processor model in the style of the time, which meant it actually had several entirely separate processors - in this case a MOS Technology/Synertek 6502A, a Motorola 6800 and a Zilog Z80, with a clock switchable between 1, 2 and 4 MHz to suit each processor. It could also be connected to a 14" 74MB Winchester drive - a massive amount of storage at the time, and apparently the first time such a disk had been connected to a micro[1]. If that wasn't enough, according to the advert the C3-B's floppy disk units combined with its vast storage meant that it had "at least a thousand times performance improvement over [other] such machines - 50 times storage capacity multiplied by 20 times access speed improvements". The machine as advertised - 74MB disk, 48K of static (fast but expensive) RAM, the OS-65U operating system and a CRT terminal - retailed for $13,000, or about £52,800 in 2021 money.

Ohio conducted an interesting and prescient experiment a couple of years later, in the late summer of 1980. Responding to a "vague feeling in the microcomputer industry that there lurks an as yet untapped but incredibly vast mass market awaiting the lucky company that discovers the key to placing a computer in every home", Ohio tried an experiment where they placed their lower-end models in several branches of Montgomery Ward, a US department-store chain. The results weren't particularly good as it turned out that most buyers came in to ask about business applications when most of the sales clerks were only familiar with washing machines and hair dryers and so many potential sales were lost, however the company persevered and made an arrangment to set up further computer shops in Montgomery Ward stores, but this time staffed by OSI's own dealers. This, it was suspected by Personal Computer World, would still not reach the masses of regular Joes. Indeed, Radio Shack, which came close to this strategy with a well-developed network of consumer-friendly shops across the US, was still really pursuing the specialist market with its TRS-80 - at least according to the compuer buyer of Sears Roebuck, the largest department-store chain in the US[2]. It was eventually Commodore which cracked this nut when it arguably created the home computer market in the US with the VIC-20, the first sub-$300, overtly "friendly" computer, sold through similar Main Street retailers like JC Penney and advertised by familiar faces like TV's William Shatner, known to millions at the time as Captain Kirk. The first time Shatner had ever used a real computer was when Michael Tomczyk of Commodore showed him around the VIC-20[3].