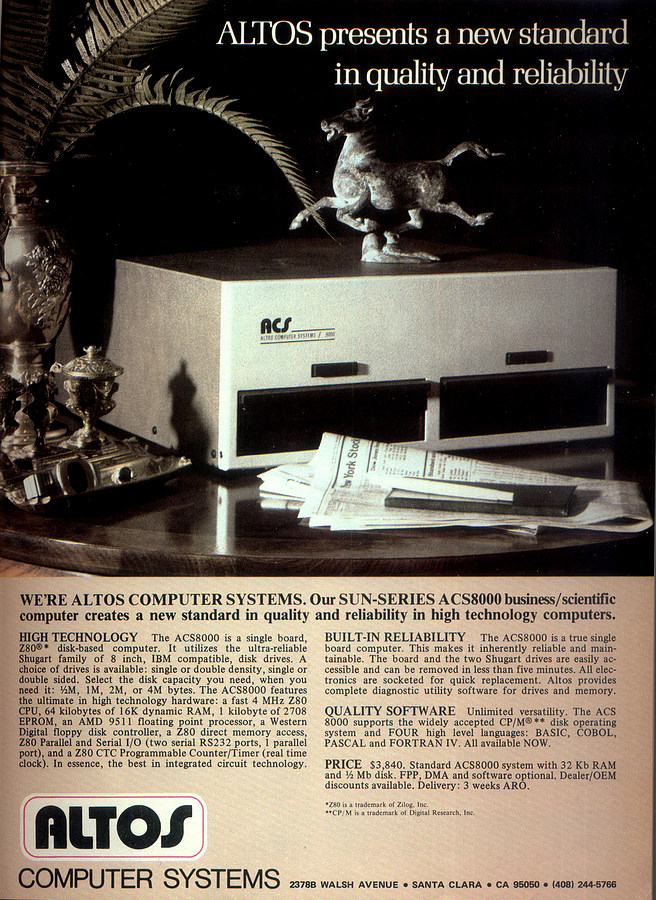 This is an advert for the Altos ACS8000, made by Walsh Avenue, Santa Clara, California-based Altos Computer Systems, that is surely vying for pole position in the field of adverts showing computers in utterly bizarre contexts. It goes up against Pearcom's Pear II, which featured an oil lamp as a prop, by having the Altos ACS8000 appear as some sort of family-silver presentation platter and/or pot-plant ornament. It's also made up of perhaps the most impressive Smorgasbord of tech names from the era, as it included a Zilog Z80A (at 4MHz), Shugart 8" IBM-compatible (not as in the PC which wouldn't appear for another three years, but the IBM mainframe disk standard) floppy drives, Intel's 2708 Eprom, an AMD 9511 maths co-processor and a Western Digital floppy disk controller. It actually shipped with four high-level languages available (which was a rarity when so many companies would advertise things as "available soon") - BASIC, COBOL, Pascal and Fortran IV - and was capable of supporting up to four concurrent users (see old-computers.com for more). It retailed for $3,840 with 32K and a 512K disk as standard - about £15,500 in 2021 terms.

Later versions of the Altos micro added support for Pick - a multi-valued database-like system that wasn't an actual operating system but acted like one - and Dibol, a language popular on DEC minicomputers. This was particularly useful as the Altos micro cost about half that of a DEC mini[1].