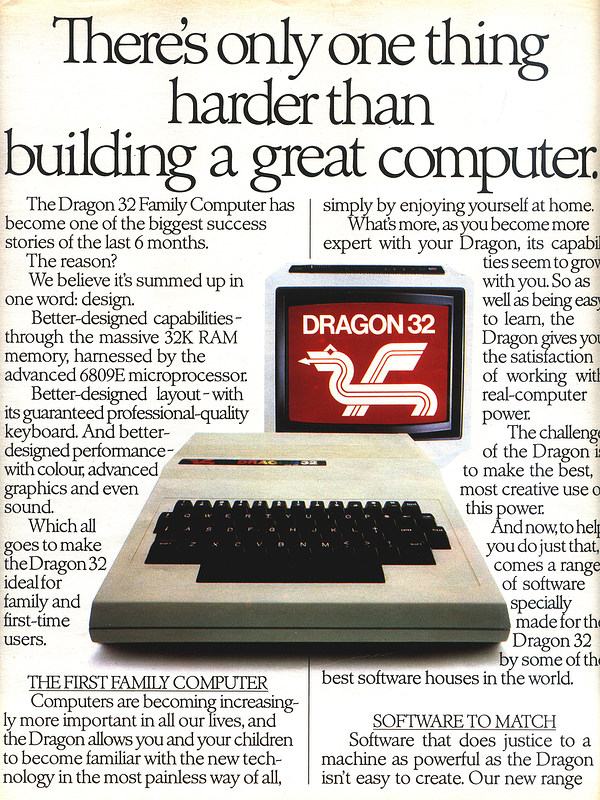 Dragon 32: There's only one thing harder than bulding a great computer. Building software to match.

The Dragon 32 was another entry in the burgeoning early-80s British computer scene and was originally developed by Mettoy, the company that also made Corgi toys. Mettoy suffered ongoing financial problems which eventually forced it to sell off most of its stake in Dragon to Dragon Data, in September 1982. Dragon Data was essentially a buy-out of the company by Prutech, the venture-capital arm of the Prudential, together with money from the Welsh Development Agency[1]. Mettoy retained an 18% stake in the new venture, but by the end of 1982 its debts were up to £10.5 million and things weren't looking too good.

The Dragon 32 had a relatively sophisticated processor in the Motorola MC6809E, at least compared to many of its comtemporaries which were still running on the 1975-designed MOS 6502 or its derivatives, however its graphics were poor compared to the Commodore 64 and the Sinclair Spectrum. The advert's wording probably didn't help either, as it seems to effectively put anyone off from getting one to program themselves. However, for a while, the Dragon was considered one of the UK's most popular micros, having sold 80,000 in the first 12 months of its release - Personal Computer News's September 15th "Top Twenty" chart had it at number 3, down from the previous week's number 2[2].

Dragon Data itself went through a financial squeeze during 1983 which was caused by increased investment in new machines - a 64K model was due and there were rumours of a business machine - combined with drop in sales during the summer. The company was "hauled back from the brink" following a hastily-assembled £2.5 million bail-out (about £6 million in 2020 terms) from its shareholders in September . This caused Mettoy to further panic because it didn't have the spare cash to support the rescue. It issued a statement that talked of a "setback" at Dragon as its own share price fell and it saw its holding in Dragon drop to 15.5%. Mettoy was perhaps justifyably worried that Dragon was going to end up like Newbury, which was going through very similar problems at about the same time. Prices of the Dragon 32 had already been cut and it was thought that in the highly volatile market of the day they would have to be cut again if Dragon were to survive[3]. At the same time, MD Tony Clarke stepped down "for personal reasons" and was replaced by an executive from GEC. Two weeks later, the crisis seemed to have passed as Dragon took on 10 more staff as it focussed on the hoped-for Christmas rush. Richard Wadman, Dragon's Sales and Marketing Director, stated that the company expected a big increase in demand in the months leading up to Christmas - "perhaps 60 to 70% of its sales for the year"[4].

Mettoy's struggle was finally over by the middle of November 1983 when it announced that it was going into receivership, with its remaining share in Dragon going up for sale, although a week or so later no likely candidates for the troubled micro company had yet emerged. Brian Moore, Dragon Data's new MD following the Prutech rescue commented "Dragon Data is a fully independent company and the news of Mettoy's receivership can have no effect on the running of this company"[5].