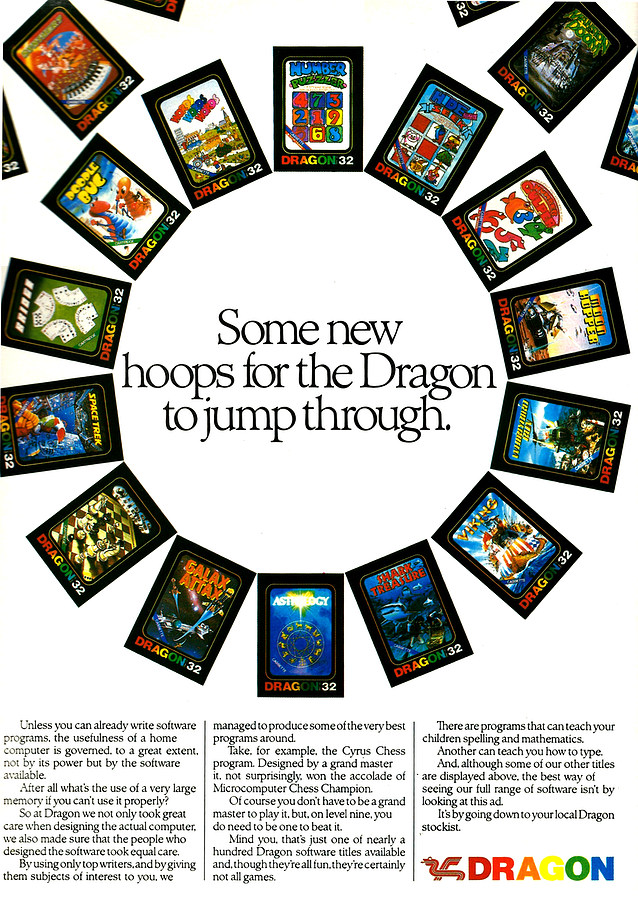 Some new hoops for the Dragon to jump through

This advert for Dragon software comes at a time when the company was going through one of its many financial crises, which this time involved an additional investor injection of £2.5 million, triggered by falling demand for the Dragon 32. Dragon's chairman and managing director, Tony Clarke, had resigned on the 2nd of September 1983 at the same time as Dragon issues a press statement detailing a rescue plan mounted by major shareholder Prutech, the venture-capital arm of Prudential Assurance. As part of the rescue, Prudential's Chief Executive Dr. Derek Allam took over the chairman role whilst Derek Morgan, of PA Management Consultants took over as acting MD on temporary secondment. Dragon's own Richard Wadman remained as marketing direcor. Mettoy, the loss-making manufacturer of Corgi toys and the company that set up Dragon in the late summer of 1982, before selling it to Prutech in the November of the same year, found itself unable to contribute to the rescue and saw its own share price collapse from 17p to 2p. Despite that, Mettoy retained a 15.5% share with other shareholders Prutech at 42%, the Welsh Development Agency with 23%, National Water Council at 8.6%, Dragon's executives with 2.3 and two others at 4.3% each. Mettoy had also provided the first hint that Dragon was in serious trouble when it was forced, under Stock Market rules, to announce that its "associate company Dragon Data had suffered a set-back"[1]. Dragon had come from nowhere to briefly become one the UK's top-selling micros by the end of 1982, having shifted 50,000 units. However, fierce competition from Sinclair's Spectrum and Commodore's 64 - at £125 and £199 respectively compared to the Dragon 32's £175 - combined with comparatively lower specs and an inability or unwillingness to reduce the price, meant that the Dragon was struggling to survive[2]

Meanwhile, Prutech was hedging its bets in technology as it had recently invested substantially in new UK robotics company Colne Robotics, based in Twickenham. Colne, headed by former investment analyst turned turned medical instrumentation designer John Reekie, had already produced around 2,000 of its Armdroid 1 robots since its launch in September 1981 and had recently launched the Zeaker micro-turtle and Colvis computer-vision system. Armed with its 35% Prutech investment, Colne had also just set up a division in Florida to produce the Armdroid 1 for the US market. An optimistic Reekie commented "These machines are the first signs of the robot summer - it is going to be an enormous industry". Competition included Heathkit, which was selling its 18"-high "Hero" robot at the rate of 140 a month and Atari founder Nolan Bushnell's Androbot, which had the £630 Topo on offer[3].

Despite Dragon's financial turmoil, it still managed to launch its new 5.25" Dragondos Disk Drive unit, after a lot of teething troubles, on September 1st[4], priced at the promised £275 (or about £940 in 2020) for a single-side double-density drive and controller. That was six months after the initial announcement and several months after competitor Premier Delta had released its own single-density drive, and to add the competitive landscape, almost as soon as Dragon's own drive had shipped, major disk-drive manufacturer Cumana teamed up with Premier to offer its own double-density model[5].

Each of the single-sided disks could store around 180K, with two drives being connectable giving four drives in total. Although the drives were due to be in shops immediately, doubts remained about availability and the size of order that Dragon had placed, which was thought to be quite small[6]. Brian Cadge of Personal Computer News's final verdict on the drives was fairly positive, with his review in the September 22nd edition concluding that "Dragon seems to have got it just about right with this disk drive, albeit rather late. The metal case and built-in power supply are a great improvement over the Dragon computer itself. The cartridge connection is a little dubious, but I encountered no harware problems and there are no obvious bugs in the Basic and the manual is a fair attempt for a preliminary one. This is the best of the drives available for the Dragon 32"[7]. Dragon User, on the other hand, in its November 1983 review of disk drives for the Dragon concluded that "You pays yer money, you takes yer choice. In our opinion there is no doubt that Delta is a better operating system than Dragondos and it is a pity for the user that Dragon Data decided that it had to produce a competitive product rather than simply adopt the Delta system"[8].

One of the programs mentioned in the advert is Cyrus Chess. Winner of the inaugral Microcomputer Chess Championship, it was written by Richard Lang, who ended up working with former chess grandmaster David Levy of Intelligent Software (who helped organise at least the Second championship on behalf of Personal Computer World[9]). Sinclair's QL would also eventually use Lang's chess program, which continued as winner of the World Microcomputer Chess Championships for much of the 1980s. David Levy, together with others such as Robert Magde of Madge Networks fame and Nick Toop, who had worked on the Acorn Atom and before that Sinclair's MK-14, went on to produce the ill-fated Elan/Enterprise - a machine that would have been fairly revolutionary had it not been released nearly two years late.

At about the same time as the this advert, details were appearing about the progression from the 32K model to the new Dragon 64, which had been first shown at the 6th Personal Computer World Show[10] in September 1983 and was due to be out in the shops in November. Dragon's upgrade plan caused much controversy - with one user describing it as "ridiculous" - as it had picked a trade-in model, rather than an upgrade of existing machines. To make things worse, it was only offering £85 for the old machine, despite it being worth around £110 on the second-hand market, whilst the 64K machine cost £225. Dragon, for its part, was attempting to maintain backwards compatibility with the existing machine, on which Paul Kennedy, organiser of the Dragon Owners' Club said "I think that in order to keep compatibility they may have sacrificed a lot of potential customers - it is a missed opportunity to enhance the graphics and sound of the 32". Dragon's marketing director Richard Wadman said drily "we have already had some indication that [the trade-in plan] will be expected, but we don't expect much feedback until January"[11].

On a more positive note, Wadman also noted that the combination of the 64K machine, plus the new businessey OS9 operating system and floppy drives gave the company "the means to enter other markets", believing that moving up the value chain would be as successful for the company as its entry in to home computers[12]. OS9 was a multi-tasking operating system that was due for release in November. It allowed resource sharing over networks, so several machine could share the same disk unit, and several programs, including a compiled Basic, were being released for it. Dragon's new manager, Brian Moore, who had moved down to Wales from a subsidiary of GEC which specialised in computerised heating and ventilation, was also "very interested in Dragon Data's move into the business market". Moore, who started on September 12th, had replaced Tony Clarke who left in late summer, at the behest of the company's shareholders, and was expected to remain with Dragon on a temporary secondment whilst a new business plan was being worked out. This came at the time when Dragon had announced it had sold fewer machines than forecast during summer and that an extra £2.5 million was being put in to the company to keep it going[13].

In what was clearly a busy month, November also saw the promotion of the Dragon 64 in the US at the first "Color Expo", sponsored by Color Computer Expositions - a subsidiary of Color Computer magazine. CC's editor Kerry Leichtman stated "We are really looking to the Expo as being the biggest event of this kind for the colour computer and the Dragon in the United States... and maybe the world!". The Dragon was being promoted/produced in the US by Tano Corporation of New Orleans, and both companies were at the event in force, alongside around 70 other exhibitors. It was hoped that 15-20,000 visitors would turn up, and to add to the promotion the mayors of both Pasadena, where the event was being held, and nearby Los Angeles apparently declared that it was "Color Computer Weekend" at both cities[14].

A month later, it was revealed that software houses writing for the original Dragon 32 were running in to some issues with their use of an unofficial "speed-up Poke". The command - Poke 65495, 0 - could actually increase the Dragon's nominal processor speed of 0.98MHz up to an impressive 1.8MHz, however around 20% of newer Dragons being produced, which appeared to have lower-quality CPUs with lower tolerances, would no longer accept the speed poke. Any programs using it, including Beyond's "Up Periscope" and C-Tech's "Flight Simulation", would simply not run. Dragon's Cathy Hyde said "We do not recommend that Dragon users use the Poke because we cannot tell what long-term harm it will cause the machine. It is not just the Dragon's processor which has been designed to run at 1MHz, but the whole design of the computer. The peripheral interface adapter which communicates with the keyboard and parts of the RAM have also been designed to work best at less than 1MHz"[15].