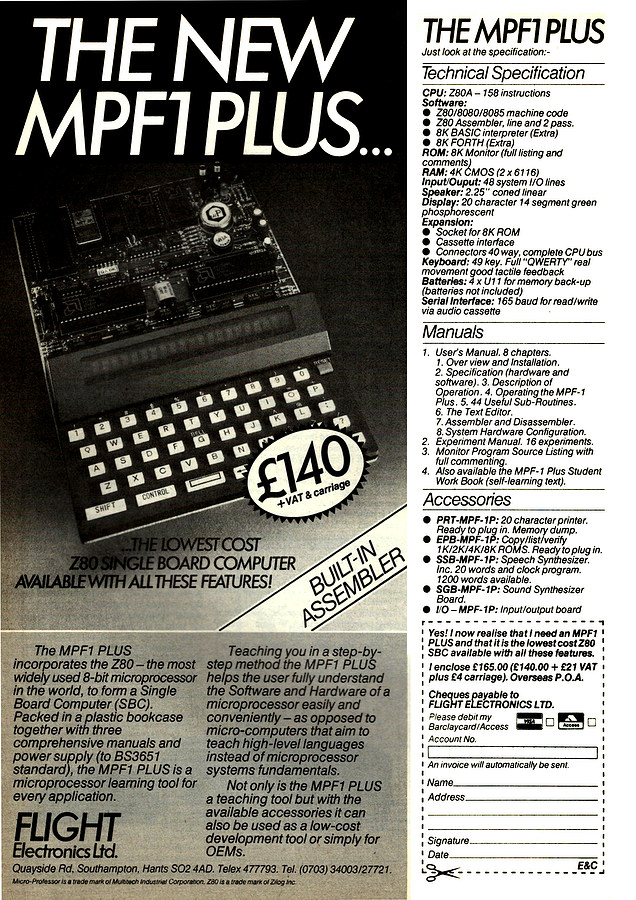 The new MPF1 Plus - The lowest-cost Z80 computer with all these features!

The Microprofessor MPF-1 Plus was a redesigned version of the original MPF-1 released by Multitech Industrial Corporation in the summer of 1982. It was very much aimed at the serious hobbist market, rather than general consumer and seemed to revel in its machine-code credentials, charging extra for something as polluting as a high-level language interpreter, like BASIC. The name "Microprofessor" was subject to some litigation in the US, with Apple taking action against a different (unrelated) computer of that name for infringing its copyrights. The MPF-1 was essentially a stand-alone Z80-based machine code development/educational computer, running at 1.75MHz and a little like an integrated version of the Nascom 2 from 1980, although it could take add-ons which made it more-or-less a "full" microcomputer. Its built-in display was formed of 20 16-segment flourescent characters, and in contrast to the original model it had a full keyboard. It also had two 8255 PIAs, which gave the board 48 I/O lines.

Concluding a review of the MFP-1, Ken Alexander wrote "the standard of construction was high and coupled with the wealth of documentation provided, the system is indeed a powerful software development tool. the computer is a powerful stand-alone machine and with the range of ad-ons produced for the system can grow in to a very flexible computer. At £165 (£560 in 2021) the Plus version of the system is more expensive than many personal micros but this is a computer that is far more versatile than most of the "designed down" consumer computers"[1].