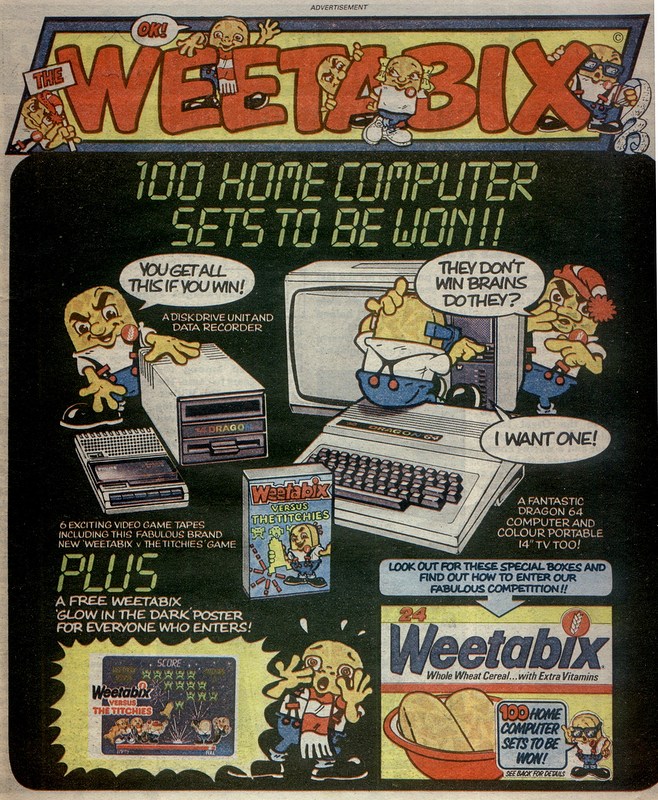 In the year that Dragon Data went in to receivership comes this "proxy" advert from Weetabix, in what would have been quite a good prize bundle at the time. Each of the 100 sets that Weetabix were giving away included a Dragon 64 plus the telly to plug it in to as well as a tape recorder and a floppy drive. Mind you they probably got the computers for free, on account of Dragon Data's financial woes at the time. Even as new products (like a Dragon with a built-in disc drive and an updated operating system) were being demonstrated at computers shows during the summer of 1984, the receivers were preparing to sell the company. Eurohard SA, a Spanish company that had already been making components for Dragon computers eventually purchased it outright for £1 million (about £4.7 million in 2013 terms) with the intention of starting production in Spain in the autumn of 1984[1]. Meanwhile, the market for home computers in the UK was becoming saturated and competition was fierce. Whilst Acorn and Sinclair were not officially discounting their machines, preferring instead to bundle in extras like software or even a free tape recorder with a BBC Model B, the Dragon could be had for only £90 - a mere £290 in 2020 money[2].

The reference to a Dragon with a built-in disk drive doing the rounds at Summer shows might have been an MSX Dragon that the company was thought to be announcing at the end of May, making Dragon Data the first UK manufacturer to get an MSX licence, beating at least seven other European micro manufacturers including Philips. The company also promised to work hard to get its machine out before the feared wave of Japanese MSX-based machines swept in to the UK. Dragon's MD said "MSX could well dominate major sections of the home computer market and comparisons with VHS and video recorders can be readily drawn" - a reference to how VHS had beaten the technically-superior Betamax through the sheer force of manufacturer numbers backing the format. Dragon's Kevin Stephens continued "Our view at the moment is that MSX is the way we will go. If so, we will almost certainly also be doing software for MSX". GEC McMichael, Dragon's marketing tentacle, did not comment on the possiblilty of the company going down the MSX route[3].

In the same week as the Dragon MSX rumour, the ten Japanese MSX manufacturers reached an agreement over which of several competing floppy-disk formats would be chosen as part of the MSX standard. The winning standard, which would replace the ageing 5.25" floppy disks that had been around since the 1970s was to be Sony's 3.5" format, and not Hitachi's 3" format which was being used by several manufacturers including Tatung and most notably Amstrad, which stuck with the format until 1987. Although it was a blow to the company, Hitachi UK's Alan Geekie was fairly sanguine about it, saying "A disc format standard is a fundamental part of the thinking behind MSX and it is inevitable that one of us has to lose out. Certainly it is not a problem though. We will conform to whatever is adopted as the disk standard". The decision to go with Sony's format - not just within MSX but in the wider industry - had echoes of VHS/Betamax, although this time Sony would emerge the victor, having lost out with its Betamax in the video-recorder wars. The 3.25" format had already been rejected as an ANSI standard, but Sony had the backing of the floppy-disk daddy Shugart (Seagate) and several other manufacturers[4] and so won out through manufacturer numbers.

Dragon had been in administration since the the spring of 1984, with a number of companies negotiating with the receiver - Robert Ellis of Touche Ross. The company's road to this point had started in September 1983 when shareholders had to bail the company out to the tune of £2.5 million, following cash-flow problems. Then in November one its shareholders - Mettoy - went into receivership, and then its Dragon re-selling partnership with Tano Corporation in the US hit the rocks when Tano failed to reach its modest sales target of 5,000 units, leading to the sacking of Dragon's US sales director George Merchant. Dragon's run of bad luck was capped off during the week of the 19th February, when Dragon gave up its own responsibilities for marketing and distribution to the GEC subsidiary GEC McMichael, and laid off 29 staff at its South Wales plant in a move, according to new MD Brian Moore, designed to "streamline the company". Moore had also laid out a plan to move Dragon in to business machines, in order to diversify its range of products[5].

During Dragon's time in administration, it had been thought that the most likely purchaser was Tandy, which made some sense as the Dragon was somewhat compatible with Tandy's Color Computer (CoCo). Tandy UK's managing director, John Sayers, with the blessing of Tandy US, was in talks with the receiver but said "it is too early to say whether we will make a bid and if so what for" and that "we have now been provided with an inventory of what stocks Dragon has but we still have to investigate every snag and loophole. Sayers had the interesting problem of actually getting hold of a Dragon so that Tandy's engineers "could pull it apart to find out just exactly what are the differences between the Dragon and our Color Computer". He was finding it difficult as the give-away prices meant that there was a dire shortage of both the 32 and 64K models, at least in the West Midlands near Dragon's factory, where "all the shops were sold out". The sacrificial unit ended up being their own office Dragon, which up to that point was being used to evaluate software. Sayers returned to Dragon's factory in the week of June 23rd where he "hoped to pick up a new machine while down there"[6]. Elsewhere, another (anonymous) Tandy spokesman was mixing metaphors when discussing the difficulties at Dragon Data by suggesting that "At Tandy, we've always had the feeling that some manufacturers were sailing too close to the wind and as a result would fall out of bed"[7].

Meanwhile, things weren't helped when it was announced in May 1984 that Boots the Chemist was looking to pull out of selling the Dragon 32 by the end of the summer. However, Dragon's Chief Executive stated that "To make a stark statement that Boots will not stock the Dragon 32 is to present only one piece of the equation. We are talking to them about replacing it with another machine which we have". Despite the blow, Boots itself offered some comfort by stating that it was continuing to support the Dragon 32 as well as sell the '64, with the company's Peter Frost suggesting that "Dragon computers will continue to feature in our range - whether that is with the 32 or not I cannot say. We are aware of new products from Dragon". This particular news followed hot on the heels of British Home Stores' announcement in April that it too had discontinued the Dragon 32[8], along with a massive price cut. This had proved somewhat embarrasing to Dragon, leading to its current owners, GEC, getting in touch with the high-street retailer to find out what was going on. BHS responded that its price drop - from around £149 to only £87.50 (£290 in 2020) was to clear small remaining stocks before discontinuing the Dragon in favour of a rival manufacturer's machine. Boots, meanwhile, had shrugged off the confusion and stated that it had no plans to lowers its own price[9] probably because it had already done so a few months before, justifying its price cut to £159.95 - below the manufacture's recommended £175 - by saying that "The Dragon is finding its right level in the market - clearly there has to be a price differential between a 64K machine like the Commodore 64 [which was £199 at the time] and a 32K machine such as the Dragon"[10].