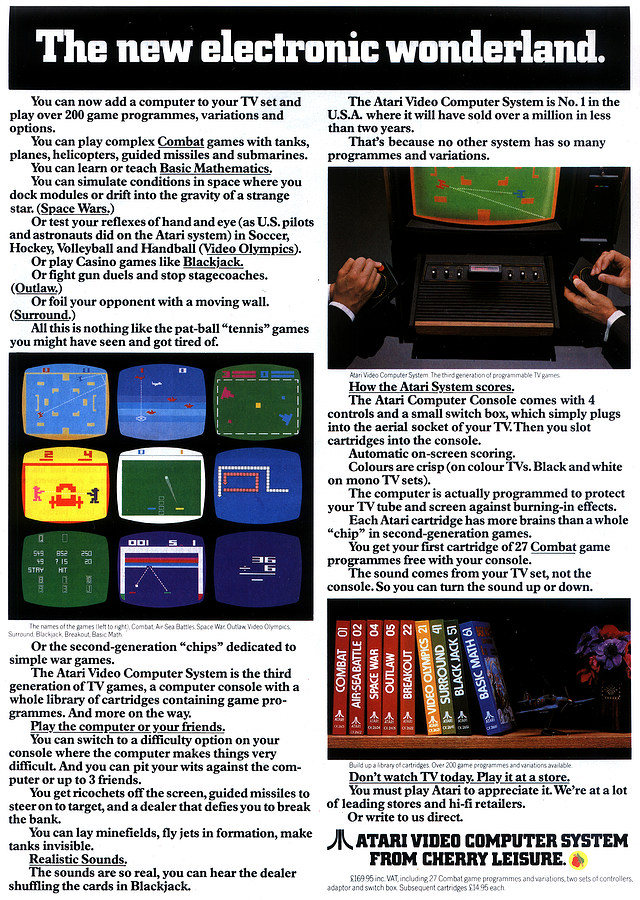 The Atari VCS was launched in 1977 and is considered as the grand-daddy of all modern video games. Although the Fairchild "Channel F" had pioneered the idea of generic microprocessors with plug-in cartridges as opposed to the older systems which had hardwired discrete circuitry, it was the VCS that truly popularised the concept. It ran a cut-down version of the MOS/Commodore 6502 processor - the 6507 - and had a single video chip called the TIA, which was designed by Jay Miner. Miner went on to become "father of the Amiga", providing another Commodore connection: years later, Commodore would buy the the Amiga, including Jay Miner, and the founder of Commodore - Jack Tramiel - would buy Atari and launch the Atari ST, a direct competitor of the Amiga.

In order to fund development of the 2600, Atari's co-founder, Nolan Bushnell, sold the company - which he had founded along with Ted Dabney in 1972 - to Warner Communications in 1976 for a rumoured $28-$32 million dollars, although Popular Computing Weekly reported a mere $15 million. Bushnell remained with the company until 1978 when he either quit or was fired, depending upon who's telling the story[2]. Atari went on to become phenomenally successful until it largely caused its own downfall in the 1983 video games crash. It was later sold to Jack Tramiel, formerly of Commodore, after having lost its owner some $540 million in 1983 alone.

Bushnell, meanwhile, went off to do other things, one of which was the company Androbot, which was founded in 1982. By 1984 it was selling robots called FRED, Bob XR[3] and Topo, the latter available for about $1,500 or £1,500 in the UK - as usual with no allowance for exchange rates or anything. The original Topo Mk. 1, which was first displayed at the 1983 Winter CES in Las Vegas, was controlled by an Apple II over a 27MHz (similar to CB) radio link, with software written in BASIC. By the release of the Mk. 2 version in 1984, it had a speech synthesizer on board and was using an infra-red link with software written in Forth.

For its UK release, Androbot chose Sinclair Spectrum distributor Prism to handle the machine and port the operating software on to a UK-market-suitable machine - the BBC Micro. Prism's development manager Graham Daubney said of the task that "The first thing I did was start work on a high-level robotics language for the BBC Micro, working as an extension to BBC Basic. So far we have finished the communications software, enabling the BBC computer and Topo to understand each other, but we are still having to call some machine-code routines from Basic. The whole lot should be finished in a few weeks". Most of the space inside Topo was taken up with a cage for processor boards, of which two were supplied as standard - one handling communications and the other handling movement. The speech synthesizer was built in to Topo's head, along with the robot's other general firmware. Prism, meanwhile, was planning to follow up its BBC Micro port with a version for Commodore's 64. Both Prism and Androbot were also said to be working on some peripheral units for Topo, including the possibility of bump detectors, bar-code readers, ultrasonic detectors, and arm, a vacuum cleaner and even a lawnmower as well as, perhaps, a personality of sorts[4].

Dabbling with non-core technologies like robots contributed to the downfall of Prism[5].

Bushnell was also a founder member of the International Personal Robotics Association, which held its inaugral meeting in Paris in March 1984. A spokesman for the IPRA said of its objectives that "The delegates are concerned that the robotics industry should achieve a certain amount of standardisation, both in the sense of establishing a commercial standard in robot manufacture and also in the realm of safety". The group, which wanted to promote robots as "something real, rather than a sci-fi gimmick"[6], collapsed in the spring of 1985.

Meanwhile, Androbot had something of a wobble during the summer of 1984 as it was forced to scale back production of Topo and put off the launch of Fred and Bob - its two other robots - on account of "financial difficulties". Prism's director of developments, and former head of software at Atari, Graham Daubney reported that "The company had been looking for more venture capital to finance production of the new robot, Fred. Now Sysorex International, who already had an investment in Androbot, has made a further investment of $2 million and has taken a major shareholding in the company". Apparently Androbot had already decided to reduce its shipments of Topo, however Prism was said to have "considerable stock" and was planning to continue both selling and renting Topo. However Fred, a $200 table-top robot a bit like a turtle and nicknamed the "drawdroid", was no longer expected to appear in the UK, although the company was still aiming at 10,000-15,000 units in the US. Despite that, Prism was actually looking at building the Androbot range of robots locally, however as Daubney reported "Any decision depends on the technology first being available in the US. When Fred has actually been produced, we can start to look at the feasbility of manufacturing here"[7].

In the August of 1985, Androbot released the Petster - a "new type of micro-driven robot". The bizarre device was a robot cat, complete with miaowing, purring and a covering of fur. It could also be programmed to respond to claps and could move around, avoiding obstacles. It would even go in to one of several "moods" at random, if left for long enough, and it would switch off at night and wake up again when it got light. There were attempts to position the Petster as something more serious, with the company suggesting that additional sensors and software could make the robot react to "burglars or fire in the house and raise the alarm if necessary". At least the techo-cat was a bit more affordable than the earlier Topo, coming in at only $100 for the deluxe model[8].

Back in 1983, the Bushnell fired-or-quit question came to a head when Atari resolved its long-running dispute with its founder, having suspended its legal action to prevent Bushnell from competing with Atari in the games market and deciding instead to re-employ him. The agreement meant that Atari gained the rights to any new coin-operated games that Bushnell's new company - Sente - produced. It was part of an overall Atari campaign to claw back its lost games market share, especially since parent company Warner and its Consumer Electronics Division had seen its income fall to less than 1% of the previous year's total[9]/