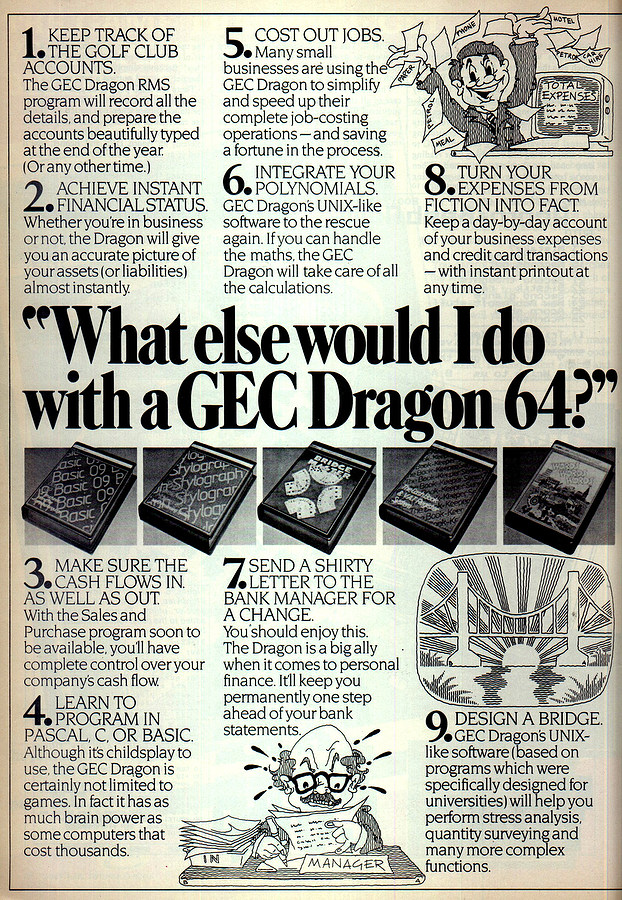 What else would I do with a GEC Dragon 64?

This advert appears during the phase of Dragon Data's history when it was being managed by GEC (General Electric Company) - the British satellites to defense to home electronics business. This had happened after former MD Tony Clarke had undergone that most cliché of resignations following a shareholder revolt: the one "for personal reasons"[1] in the late summer of 1983 in a process that started with the appointment of GEC's Brian Moore as replacement managing director on September 12th. Moore was hired on "temporary secondment" whilst a new business plan was worked out to keep the company going, against the revelation that the company had lower sales than expected during the summer of 1983[2]. GEC had bought into Dragon with a £2.5 million investment but by the end of May 1984 the receivers had been called in, around the time that this advert appeared in print. Dragon was then purchased by Spanish start-up Eurohard for £1 million (about £4.7 million in 2013 terms) which intended to move production to Spain by the autumn of this year[3].

In common with many adverts of the time, there's a list of "things you can do". Amongst the usual references to standard guff (accounts, finance, estimating, expenses and word-processing) was an interesting item at number nine: a reference to Dragon's OS-9, long before Apple purloined the same name for one of its operating systems. This was a Unix-like disk and file operating system, written by Tandy/Radio Shack for its 64K Color Computer's Motorola MC6809 CPU and announced at about the same time that Dragon Data had just concluded a deal to sell the 64K version of the Dragon in the US[4]. OS-9 had some nifty features such as time-sharing, file ownership attributes and the ability to move code to anywhere in the memory map, which meant several programs could be resident at the same time - something difficult to do in most home computers as there was only one entry point to Basic, which was often fixed. It also supported two of the greatest features of Unix: output redirection and pipelining - sending the output of the same program to the screen or printer without changing the source and feeding one program's output in to the input of another[5]

When Dragon Data announced that it was calling in the receiver, there was a buying frenzy as retailers, eager to off-load stock, were selling the Dragon 32 for as low as £59 (£190). There was also a rapid re-allignment among software houses, with Salamander Software - a company which started out as a partnership of former Sussex University students[6] at about the same time as Dragon - rapidly found itself in talks with Tandy to sell some of its titles for use on Tandy's Color Computer, a machine which shared the same 6809 CPU and for which software was already partly interchangeable. One of Dragon's problems was that its early success made it lose sight of its software suppliers, with Microdeal's John Symes suggesting that "Everyone at Dragon was too busy to talk to us. I don't think they appreciated the need for third-party software" and when sales later slowed, thanks at least in part to a drought of software titles, Dragon technical staff were just too difficult to reach. Soft Solution's Shaun Fensom continued "It was notoriously difficult to get information about the 32 from the company. It was as though Dragon didn't know its own machine". However, Premier Micro System's Mike Bedford acknowledged that despite the failure of the company, there were still 200,000 Dragon users around. He said "That's a large potential market. They aren't going to go out and chuck their computers in the bin just because the company has gone bankrupt"[7].

Tandy was one of the companies sniffing around the remains of Dragon, give the potential close match, and by the end of June Popular Computing Weekly was already speculating that the company would be carved up between GEC and Tandy, with the latter said to be interested in taking on support for the 32 and 64, as well as its range of software, although not the Dragon machines themselves. Tandy UK's managing director, John Sayers was in talks with the receiver, saying that "we have now been provided with an inventory of what stocks Dragon has but we still have to investigate every snag and loophole"[8], one of the "snags" being that up to £6 million worth of stock was still hanging around Dragon's warehouses. Tandy was however said to be interesting in taking on Dragon's Kenfig assembly facility in South Wales, since advisers from Tandy US and its French manufacturing plant had visited the site and had apparently made an offer to Dragon's receivers, Touche Ross. Sayers said "Our product manager in France has been to look at the assembly plant and, while it may be an attractive idea, it is only a possibility"[9].

The irony was that the receiver had been called in during the same week that Dragon had revealed some new products, including the Touchmaster graphics tablet and a 64-based "Dragon Professional", but there were also rumours that the company was about to announce a new up-market machine code-named "Beta", which was already in prototype stage with well-advanced plans for manufacture. Whilst the receiver announced that the tablet would "almost certainly" continue, the rest of it was less certain, in particular as 81 of the company's 152 staff (already down from a pre-Christmas peak of 270) were made redundant almost immediately. Even so, managing director Brian Moore reckoned that "there is plenty to buy here, from fixtures and fittings to the whole company". With a nod to Tandy's possible involvement, he continued "it is almost certain that somehow, somewhere, there is someone interested in providing 200,000 Dragon owners with continuing support". Moore also explained the reason for Dragon's fall - apart from the fact it was considered to be promoting a product that was looking increasingly dated - as being the ongoing volatility of the UK market and the difficulty in matching demand. He said "the 32 and 64 are still selling, although not as well as we would like. We simply ran out of cash"[10].

GEC had obviously not been too burned by its experience with Dragon as it announced in the summer of 1985 that it was planning to build a £150 million chip factory, which would have been the largest investment yet in the UK microchip industry. The plant, which was to be run by GEC's Marconi Electronic Devices subsidiary, was expecting to specialise in chip manufacture for military and telecomms industries, which it was thought would isolate it from the problems that other mainstream semiconductor manufactures such as STC and Inmos, the company founded with vast wodges of Government money and with high ideals for its Transputer RISC-like processor, were having following the dramatic drop in the price of chips[11].

Perhaps the final time that a Dragon 32 was sold at retail came in the summer of 1986, when electronics discount warehouse Proops was offering 30 of 90 Dragon 32s it had recently acquired for sale at only £23 (£68). The remaining 60 machines were all missing the top of their cases as well as power supplies, but were also on sale for only £15 (£44), with most of the machines even coming with manuals[12].