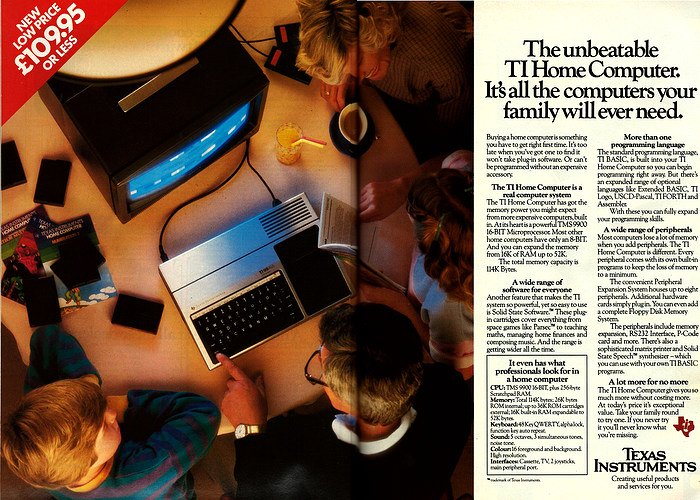 The unbeatable TI home computer. It's all the computers your family will ever need 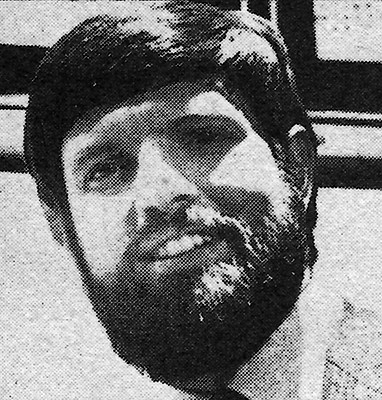 The improbably-named Mike Lunch, © Popular Computing Weekly, 6th October 1983TI's pushing of Commodore out of the calculator market in the 1970s had come back to haunt it in 1983 - the year of this advert. When TI, which had been manufacturing the calculator parts that Commodore relied on, entered the calculator market itself and pushed prices below what they were selling the parts for, it forced several companies - like Bowmar - out of the market. Commodore however reacted by purchasing its existing supplier of calculator chips - MOS Technology. This also gave it the 6502 processor, which led to the Commodore PET, but the company also learned, according to Sol Libes writing in Personal Computer World, that "the key to the consumer market was to bring out repeated new products and to undercut competitors' prices", which it did with a vengeance in 1983 - a move, which although targeted primarily at TI, also happened to gave it 30% of the market. TI, meanwhile, was feeling the pressure and was struggling with a huge stock of unsold TI-99/4As. It had introduced a £50 discount voucher scheme at the beginning of 1983 which had apparently been "so successful that the offer [was] to be continued indefinitely". TI UK's MD - the improbably-named Mike Lunch, recently of Mattel UK - offered some scything insight when he suggested that "The major reason the 99/4A machine has not been selling was price"[1]. Later in the year it dropped the price to $89 in the US and £109.95 in the UK (£680 in 2021) in order to match that of the VIC-20 and Atari's 400.

The problem was made worse by the fact that in the US the TI-99 was seen together with the TS1000 (the US version of Sinclair's ZX81) as "first generation" machines which, because they weren't selling, were having their prices continually reduced until "they were being sold at ridiculous levels", according to Raymond Yap of Wongs, the Hong Kong-based manufacturer of the TI-99 and a raft of other famous micros[2]. This left Texas with little or no margins on its machine - a "road to disaster" according to Yap - to the extent that legal action was underway in the US thanks to a suit filed by a stockholder which claimed that TI was actually selling the TI-99/4A for less than it cost to make. To add to the bad news the company had also revealed that it had laid off 750 workers and that sales had dropped by 20%. Yap also made the observation that perhaps it was all inevitable: "Gradually, we are beginning to see the emergence of just a handful of successful computer manufacturers: Commodore, Acorn, Sinclair and IBM". TI was not on his list.

This particular war was also not without its collateral damage - Atari was caught up, as was Mattel, maker of the Aquarius, which was cutting 260 workers in the face of a 19% drop in sales. Even the business end of the market was affected, with the Osborne 1 on offer for $1,099, down from $1,750 the year before. Famously premium-priced Apple was also having a hard time reigning in its dealers, some of which were offering the Apple II for $500 below its list price of $1,992[3].

On June 10th 1983, a forecast loss of $100 million (about £220 million in 2021) was leaked to the Dallas Financial Times, which led to TI's share price dropping by $51 in two days, wiping off nearly $1 billion in equity and making it one of the largest declines in recent US history. As Popular Computing Weekly pointed out, TI's price cut of the TI99/4A to only $100 had "spectacularly failed to produce an upturn in sales". Commodore's Jack Tramiel denied that the price war had gone too far, saying "Not at all. It is all to do with the learning curve - as we improve our yield and manufacturing efficiency, we can reduce prices. We do not wait until we are forced to cut prices - we do it when we can"[4]. At least other parts of the TI empire were faring a little better: back in April, TI announced that it had won a £2.7 million order to supply TMS 4164 64K DRAM chips for the 48K version of the Oric 1 micro[5].

Apart from launching its micro in to the UK market with incompatible NTSC-only TV output, one of the reasons that the TI99/4A didn't do that well might have been down to the company's apparent hostility to 3rd-party developers, in particular restricting who could produce cartridge software for the machine. TI, which was generally infamous for its unwillingness to reveal any useful technical details of its machine to third-party developers, had been the sole supplier of cartridges since 1980, until some of its employees left the firm and set up their own software company - Funware - at which point an exception was made to allow the spin-off firm to make and distribute cartridges as well. This agreement looked like it might come unstuck when Funware started to distribute software in the UK via its new California-based parent company Creative Software, and Reading, UK-based Audiogenic. At 1982's Summer CES in Chicago, TI was issuing "veiled threats that it would sue any company producing software cartridges for the 99/4A"[6]. This was not exactly a good way to encourage the ecosystem around a product and was in marked contrast to companies like Commodore, where several third parties, including Spectravideo, Atari and even Creative Software itself[7], were producing cartridges for the VIC-20 and 64. Meanwhile, Audiogenic hoped to skirt around the issue by distributing under the Funware brand with the addition of "a sticky label saying 'Distributed by Audiogenic'".

TI seemed to back-track somewhat on its secrecy and anti-developer practices towards the end of October when it "decided that a new approach [was] needed" and made changes to the software side of its struggling micro business. This quickly led to 15 new cartridges announced by well-known US software houses including Broderbund, Sega, Imagic, Sierra On-line and adventure specialists Scott Adams[8].

Back in September, TI announced an updated machine which, with 80K memory, built in speech synthesizer and machine-code monitor was to "leave the long-established 99/4A standing for power and capacity". Set to be called the TI-99/8[9], the machine was a deliberate attempt to go a bit upmarket. However only a month later, TI announced that the machine - never publically displayed, but shown privately to select customers during June's CES, would not now be replacing the TI-99/4 model. This news had followed the demise of the basic TI-99/2 - a machine which didn't even have sound or colour - which was cancelled when the ever-reducing price of the /4 model, thanks to the US price war, reached parity with the /2 model and squeezed it out[10]. The 99/8 had been expected to be launched in the UK early in 1984, but TI's financial losses led to it exiting the market in November 1983. As it did so - in the same week that Jupiter Cantab went in to receivership - TI's chairman Mark Shepherd and president Fred Bucy issued a joint statement saying "With [disappointing third-quarter sales] continuing in to October, it became apparent that fourth-quarter demand would not be sufficient to prevent large additional losses. In order to limit further financial drain on TI we have made the decision to withdraw from the consumer and home computer business". Although the TI-99/4A had been successful in its native US, it had proved expensive to make and Commodore's price war combined with Sinclair's launch of the TS1000 (ZX81) in the US finished it off[11].

The huge stock of unsold 99/4As had led to significant financial losses in the final quarter of the financial year, a situation caused primarily because TI's Consumer Division had over-estimated summer sales levels[12], much like Grundy had done with its Newbrain machine in the same year[13]. Towards the end of November it was being reported that US retailers had "begun the process of unloading an estimate 500,000 99/4A home computers at rock-bottom prices". Prices were so low that it was possible in some places, where TI's customer rebate scheme was still in operation, to pick up a 99/4A for only $20, or about £48 in 2021. At least the news of TI's abandonment of the micro market seemed to go down well with the company's shareholders - shares jumped $22.75 in the first day[14]. As if to put the boot in, in the same week that TI had announced that it was not going to replace its ageing TI-99/4, IBM announced that its profits were up 25% to $1.3 billion, on hardware sales of $5.29 billion. At that time, sales of its PC accounted for a mere 3% of the company's income[15].