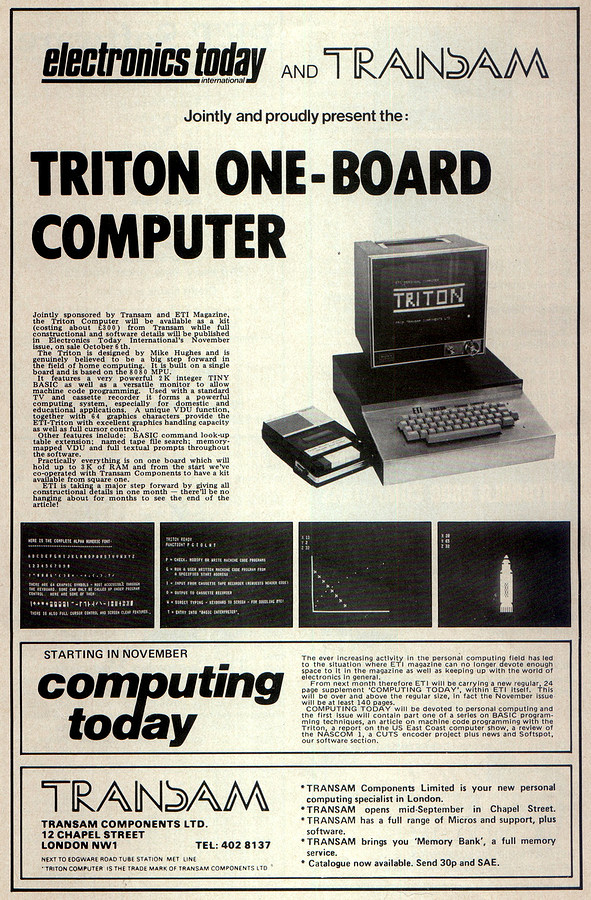 The Triton one-board computer started life jointly sponsored by Transam and Electronics Today International (ETI), as a sort of cross-marketing collaboration. Transam provided the hardware in kit or assembled form, with the kit retailing at £300 (or around £1,820 in 2020) and ETI providing the instructions on how to assemble it in their November 1978 issue. Designed by Mike Hughes with firmware by Brendan Owen[1], it was based on Intel's 8080 and came with a 2K "Tiny BASIC" as well as a machine-code monitor. It was intended to be used with a regular TV as a monitor and a cassette deck as storage.

The advert is also notable in that it shows that sister publication to ETI - "Computing Today" - was starting in November. Whilst the advert had appeared in already-extant publication Personal Computer World, and there had been publications like Byte in the US, this was the era that computers were moving out of the realms of advanced projects for electronics nerds into a thing in their own right, no doubt precipitated by the release of the "1977 Trinity" (Commodore PET, TRS-80 and Apple II) the year before, and the choice of computer magazines was expanding too.

Meanwhile, the Triton reviewed well in December 1979's Practical Computing. Ron Geere, the editor of the Independent PET User Group Newsletter, concluded "It is difficult to design something to suit everyone within the constraints of price, reliability and performance. In this respect the Triton has scored remarkably well. The piece-wise availability enables one to tailor the unit to one's own requirements and not to pay for unrequired facilities". The Triton also had its own Triton User Group Newsletter, with the usual product news, programming guides, circuit diagrams and program listings, including a version of the popular game Star Trek for the Triton's Tiny BASIC[2].