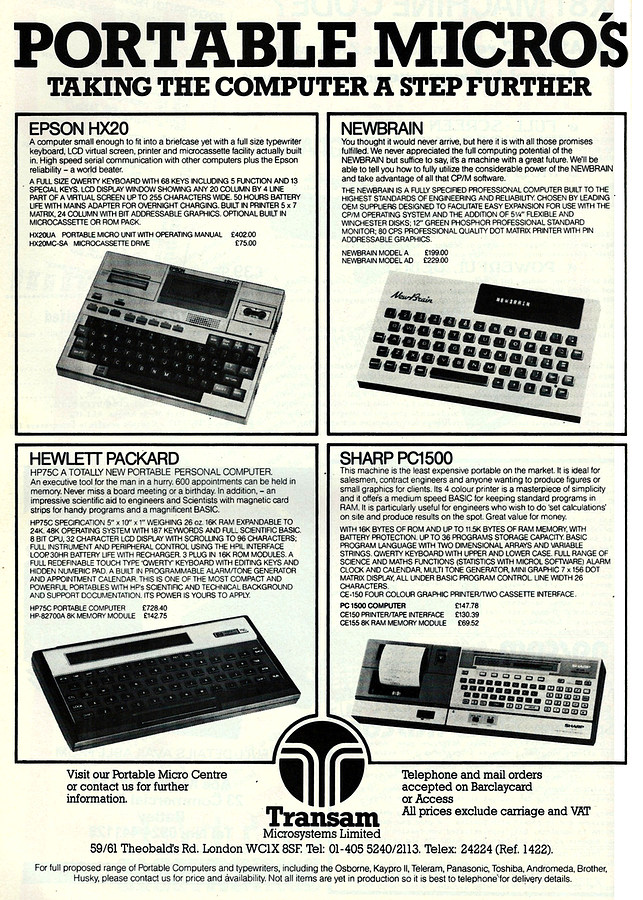 This is one of a few adverts that appeared around the time which could be read as something of a sad coda on the life of Transam Microsystems Limited, which had started out as Transam Components and which had launched its Triton one-board computer in a "we supply the parts, you describe how to make it" collaboration with Electronics Today back in October 1978. Either that or it had recently launched Transam Micros as a retailer spin-off.

In 1980 Transam launched its Tuscan model, which was sold until 1982, but by the time of this advert it appears to have become more-or-less a retailer. However, it was clearly still building micros somewhere as it had been in the frame to build an ITV competitor to the BBC's successful BBC Micro, as built by Acorn. Although talks had been in progress for some time as ITV was interested in its own micro for use in new micro-computer programmes it was developing, a meeting of representatives of the various ITV companies on Monday 12th December voted against the plan, citing provisions of the Broadcasting Act, which prevented any form of sponsorship, and concerns about a conflict of interest with ITV's own advertisers, should ITV produce its own micro. There remained some concern that a few of the ITV companies might go it alone, however secretary of the Independent Television Companies Association, Ivro Stolliday, suggested that "The debate has taken place at the most senior level and every company has come around - I think the decision will stick"[1] - unfortunately for Transam. However, the company was still determined to launch the machine - a Z80-based micro with 64K RAM and expected to sell for the same £399 as the BBC - at the Which Computer? Show in Birmingham in February 1984, as it had already been in development before ITV's interest. It would have been a useful low-end complement to Transam's £1,700 Tuscan[2].

If nothing else, apart from the grievous use of a Grocer's Apostrophe in the title, this particular advert provides a nice "zeitgeist" of the portable micro industry of the day, featuring the Epson HX20 - generaly considered as the first proper portable computer; the NewBrain - the machine which was originally chosen as the BBC Micro until delays and inability to match the spec caused the BBC to switch to Acorn; The Hewlett-Packard HP75C and finally the Sharp PC1500. The HP retailed for £728.40, or around £2,510 in 2020, had a fairly impressive 48K ROM and could take up to 24K RAM, however that was trumped by the NewBrain which could take up to 2MB and only cost £229 (£780) for the Model AD shown (with the "D" meaning built-in display)