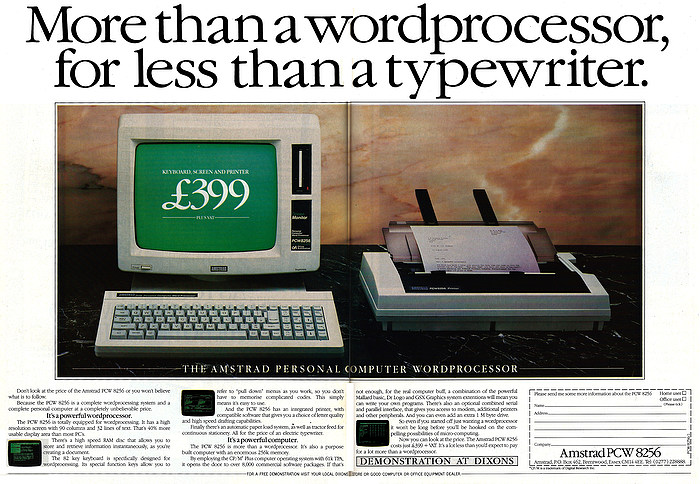 More than a Word Processor for less than a typewriter

Retailing for only £399 - about £1,250 in 2021 and about a quarter the price of an IBM PC at the time, the P‍CW 8256 and its follow ups were highly significant and transformative in the UK market, often being credited with being the machine that finally "got the technophobes in to computers". By the time it was discontinued in 1998, 8 million P‍CWs had been sold, with 700,000 shifting in the UK in the first two years alone[1], making it the highest-selling UK micro ever until the Raspberry Pi beat it in early 2016[2].

After it first arrived in shops, early indications were that the P‍CW 8256 was going to be a good seller. The first ten machines that Dixons' Holborn Circus branch received had all been sold within a few days, whilst most of the Oxford Street branch's stock was similarly "spoken for". According to an Amstrad spokesman, this was entirely typical[3] of the way sales were going. Dixons had had the High-Street exclusive on the machine from its launch until the end of 1985, although from Sepember it was also available in independent microcomputer shops and also office equipment distributors, which were selling directly to businesses. This, especially given that those first shipments were measured in the tens, seemed to be part of a supply-limiting process, as Amstrad was hoping to open up availability to other High Street stores at the beginning of 1986 once it was able to produce enough machines to keep up with demand. Amstrad claimed that it sold 200,000 micros in 1984 and was aiming at 600,000 in 1985[4].

By Christmas 1985 it was looking like demand was completely outstripping supply as despite the deliberately-restricted availability, unit sales were already said to be in the region of "five figures". An Amstrad spokesman continued "It's a 100% unbelievable success. It has sold out and created waiting lists all over the place. Most people should get their PC‍W 8256's before Christmas, but it's impossible to tell really". Loretta Cohen of Amstrad distributor Lightning continued "The PC‍W 8256's are pre-sold before we get them into stock. There certainly won't be ample stocks of the machine in the next few months". The runaway success of the machine also had a knock-on effect on the available of the non-standard 3" disks that the machine used, as according to Amstrad "people keep buying two boxes of disks at a time. We are just about keeping control, but it is a tight situation"[5].

Popular Computing Weekly was certainly impressed, saying in its review that the 8256 was "A no-nonsense , well-presented package, which although it is being put forward as a dedicated wordprocessor, is certainly capable of very much more than that" before continuing "And the price! We are talking about a monitor / keyboard / printer / software bundle for only a little more than the price of a QL!. Make no mistake, this micro could revolutionise the office and home business computer market. And the multinational micro giants like IBM and Wang stand a chance of being hit where it hurts most - right in the profit margins. At £450 nothing else comes close"[6].

Just a month earlier, Amstrad had announced record pre-tax profits of £20.1 million, which was an increase of 122% over the previous year. It was also reported that Amstrad's micros were accounting for 66% of its sales, up from only 4% the year before, with the rest of its turnover being made up of Amstrad's more traditional output of budget audio hardware and colour televisions, as well as micro peripherals and software[7]. This was at a time when Commodore had reported a $124 million loss for the last three months alone[8], Acorn had been bailed out by Olivetti and Sinclair was in trouble since its potential Maxwell rescue had collapsed. The profits nudged Amstrad's shares up to 134p and made Alan Sugar's 50.2% of the company worth £64 million, or a cool £200 million in 2021. 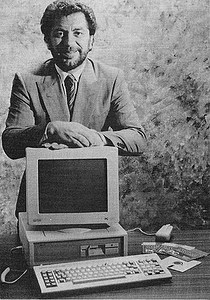 Alan Sugar and an Amstrad PC, © Popular Computing Weekly, August 1987It was no wonder that the company had the spare cash to buy Sinclair in the following year, as by February of 1986 it was reporting even more profits thanks to its PC‍W 8256. Half-year profits up to the end of 1985 were up to £27.54 million, which was nearly three times that for the previous six months and was impressively £7 million more than its entire year profits for 1984-85. The 8256 was accounting for 21% of Amstrad's total sales for the period, even though it was only launched half way through, and Alan Sugar's paper worth had surged to £188 million (£550 million in 2021). Amstrad's results were orthogonal to just about every other microcomputer company around, with Commodore reporting more losses of $53.2 million for the last quarter in 1985, Sinclair only surviving thanks to ongoing arrangements with its banks and other creditors - even though it was insiting that its total debt was "quite low" and that it had already paid half of the £15 million off[9] - and Acorn having abandoned the home computer market almost entirely. As Popular Computing Weekly pointed out in a February 1986 editorial, "Amstrad continues to confound the popular notion that the small computer industry is either in a steep decline or died at some point in 1985"[10].

Amstrad had a bit of a hissy fit in the summer of 1986 over reports that the P‍CW hadn't been doing so well in the US, even though a deal with US mega-retailer Sears at the end of March 1986 meant that the machine would be available in just about every town in the US and Canada[11]. The article, published in Microlink - part of BT's Telecom Gold - suggested that only 40,000 P‍CWs would be shipped in the US during 1986, contradicting Amstrad's estimate of 125,000. It also suggested that the factory in Korea where the P‍CW was manufactured was only turning out 15,000 micros a month - a third of the total claimed by the Boys from Brentwood. Amstrad countered with its own numbers: 10,000 machines shipped to the states per month from early 1986, Sears was taking 125,000 machines whilst 320,000 P‍CWs had been built so far, with production now up to 50,000 per month. Whilst Amstrad's lawyers were "looking into" the Microlink story, the source of the article - Informatics Daily Bulletin - had been revealed to have been innacurate, and had been corrected as soon as it had been noticed. An apology had been issued[12].

Whatever the realities of absolute sales figures, at least Atari was taking the threat from Amstrad seriously. Whilst Commodore had the relatively-expensive C128D - a sort-of multi-processor version of the venerable C64 with a drisk drive and CP/M bolted on - and Sinclair had apparently decided that the two companies were selling into completely different markets, Atari's president Sam Tramiel - son of the legendary Commodore founder Jack - was acknowledging Amstrad's success as he announced that Atari was to produce a one-box "PC‍W basher". This machine would be taking on not only the original PC‍W 8256, but also Amstrad's new PC‍W 8512 - the £570 (£1,680) machine which came out at the end of March 1986 and with its extra memory and dual 3½" disk drives was clearly aimed at the more serious business market, in prelude to the expect Amstrad PC which was due in the autumn of 1986[13]. The biggest problem for Atari though was that Amstrad wasn't hanging around, and by the time it had its "basher" out, Amstrad would have simply moved on.