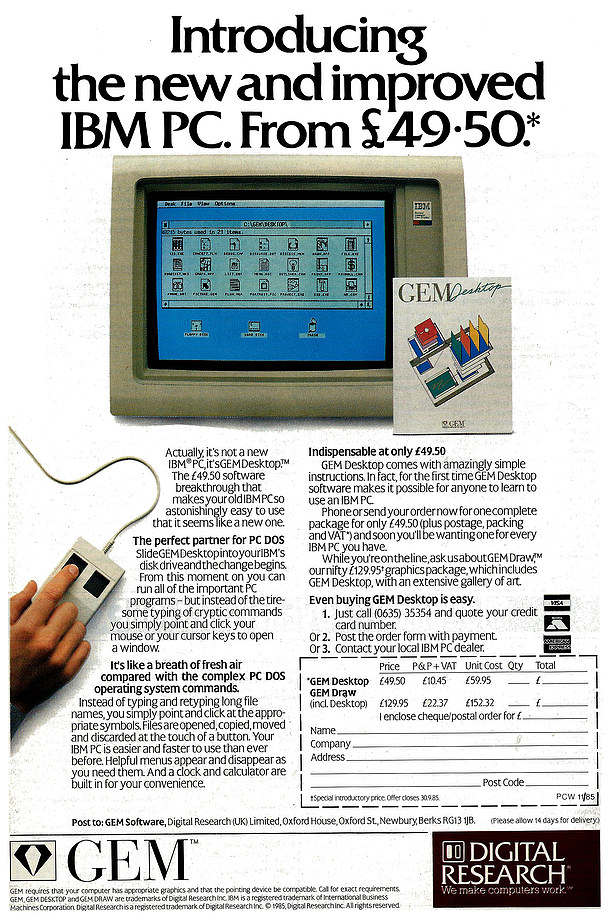 Introducing the new and improved IBM PC. From £49.50

Much has been written about how CP/M, the pioneering, multi-platform operating system written by Gary Kildall and his company Digital Research - originally known as Intergalactic Digital Research and founded by him and his wife Dorothy in 1976 - was copied by Seattle Computer Products and sold to Microsoft, which in turn heavily plagiarised that to build the original "quick and dirty" QDOS (which became PC-DOS and MS-DOS) for the IBM PC, thus changing the industry for ever, and also how apocryphally - but incorrectly - DR might have got the IBM gig if Kildall hadn't been playing golf or flying a plane or something.

In reality, Kildall was quite sanguine - and perhaps too laid back - about the situation, in particular because he didn't think his then-friend Bill Gates would stitch him up[1]. Writing in April 1989's Computer Shopper, he said "In the early days, MS-DOS was a duplication of CP/M functionality, but at that time there was a much freer atmosphere as to what you could, or could not do with other people's concepts. This was especially true in software and there were many CP/M clones. I don't feel IBM did anything wrong - that is the way business is, and you have to make the best of it".

He did however have a dig at glaring injustice on the part of IBM: both MS-DOS and CP/M were available for the IBM PC, however the former was being offered at $60 and shipped in the box, whilst CP/M-86 was being sold for $250 and had to be delivered serparately. This was not exactly a situation likely to help DR's sales. 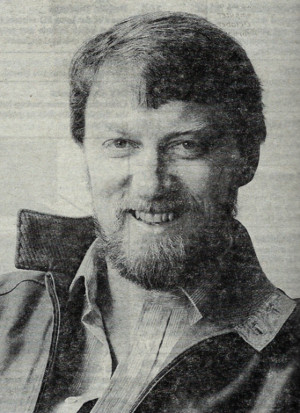 Dr. Gary Kildall © Computer Shopper, April 1989Despite the apparent benevolence, Kildall nevertheless went on to attribute a major part of DR's post-CP/M problems to IBM's choice of operating system. Where DR had been working on concurrent (multi-tasking) systems since 1981, IBM took the world down the route of single-tasking for a few more years by choosing MS-DOS - a decision which Kildall reckoned "slowed [DR] down for a good five or six years".

This was because IBM's choice essentially set the expectations of the market, which meant that mainstream business users remained uninterested in multi-tasking, and would remain so until 1985, when Commdore's Amiga arrived - as did Microsoft's Windows, but that took several more years and two more major versions to get to a state where people would really buy it.

And so DR was eventually forced, in an ironic reversal of fortunes, to support MS-DOS standards. Kildall said "As we had lost ground in terms of the operating system standard, we adopted some of the MS-DOS conventions and calls to become compatible in our development of our new multi-user system, Concurrent DOS".

Dr. Kildall's piece, although written in 1989, then neatly segued into this advert for GEM: "Our graphics group was developing some neat stuff in bitmapped graphics. They came up with a system which we called Crystal which we pre-announced in 1984. This developed in to GEM, which we are doing very well with at this time"[2]. GEM appeared on the Atari ST, whilst the forerunner - GSX - had appeared on Amstrad's 6128.

As well as GEM, DR had been contracted to provide its GemWrite and GemPaint applications for the ST, however the two had something of a bust up at the very end of 1985 when Atari announced that it had scrapped plans to bundle the software, with Atari's UK sales and marketing manager Rob Harding saying "as a result of Digital Research's failure to supply us with satisfactory product, we will instead be supplying two different programs".

DR seemed to be relaxed that the situation was only short term, suggesting that the two alternatives - FirstWord, from Cambridge's GST and DBMaster 1 from Stoneware of the US - "will be provided as a temporary substitute", however it was not entirely forthcoming about why the software was late, suggesting that "the products are coming and there is no technical problem with conversion to the 68000, but they're not yet at a stage where they can be supplied"[3].

GEM also fell foul of Apple's famously litigious legal team when it was forced at the end of 1985 to "substantially change its screen presentation of programs written under GEM". The dispute over the similarity of GEM's screen display to Apple's had been running for around six months but was eventually settled out of court.

Frank Iveson of DR said "Apple claimed that our artistic representation was too close to theirs" but that "it wasn't a question of changing any of the code, simply the screen layout". DR, for its part and with an impressive spin, said "We were trying to re-inforce an industry standard, so it's something of a credit to GEM that Apple got upset"[4].

The first real signs of DR's slow drift into obscurity happened in the spring of 1987 when the company announced that it was to move away from the mass market. Although its GEM graphical operating system was doing well on the Atari ST and Amstrad's PC1512, the targetting of the IBM market with its DR-DOS had been less successful, leaving it with the three main markets of "Multi-user micros, specialist industrial automation and graphics systems on DOS", according to DR UK's vice president Paul Baily.

Baily continued "We are totally committed to all three, although the main focus is in the multi-user markets", where Concurrent DOS 286 was the current offering. The company had obviously made up with Atari and was expecting its GEM Desktop, GEM Paint and GEM Write to also appear on Atari's new required-but-not-really-wanted PC due in August as well as any new Amstrad PC-compatible that might appear[5].

The future is lasers

Gary Kildall had taken something of a sabbatical from DR at the end of 1985 when he set up a new business - Activenture - in Monterey, California. The new company was focussing on CD-ROMs as a form of computer data storage, although its first product was actually a 12" laser (video) disk with Golier's American Encyclopaedia on it. Kildall reckoned there were some 120,000 printed copies floating around in the US, so the potential market was significant.

It might have been assumed that publishers would be hesitant to see their content appear on this new medium, but Kildall suggested that "there's a lot of this sort of information already on online databases, and all we do is take their tapes and sell them. The profit margins are very good, and the number we can sell is good".

Even by the beginning of 1986, CD-ROMs were already cheaper to produce than magnetic media such as floppy disks, as they could be stamped out ready-formed rather than having to have the data separately recorded onto them. It was also profitable - the entire Grolier encyclopaedia, despite being only 160MB of data on a 400MB disk, sold for nearly $100.

The optical disk market, according to market research from Frost and Sullivan, was expected to grow at a rate of 271% from 1984 to 1990 - a forecast that it considered "conservative". Meanwhile, another market-research report, this time from Cuadra Associates, showed that 197 new databases went online between August and October 1985, bringing the total up to nearly 3,000, which were available through over 440 separate online services.

Kildall was aware of the on-line competition as he declared his recent venture "high risk", however he remained optimistic - which was probably just as well as he'd already invested $1 million in digitising equipment to get text into an electronic format[6]. It was not unreasonable - it would be some time before the internet became both ubiquitous enough and fast enough for the average user for it to displace CD-ROM. If anything, Flash memory in the form of thumb drives would displace CD-ROM before the internet truly did.