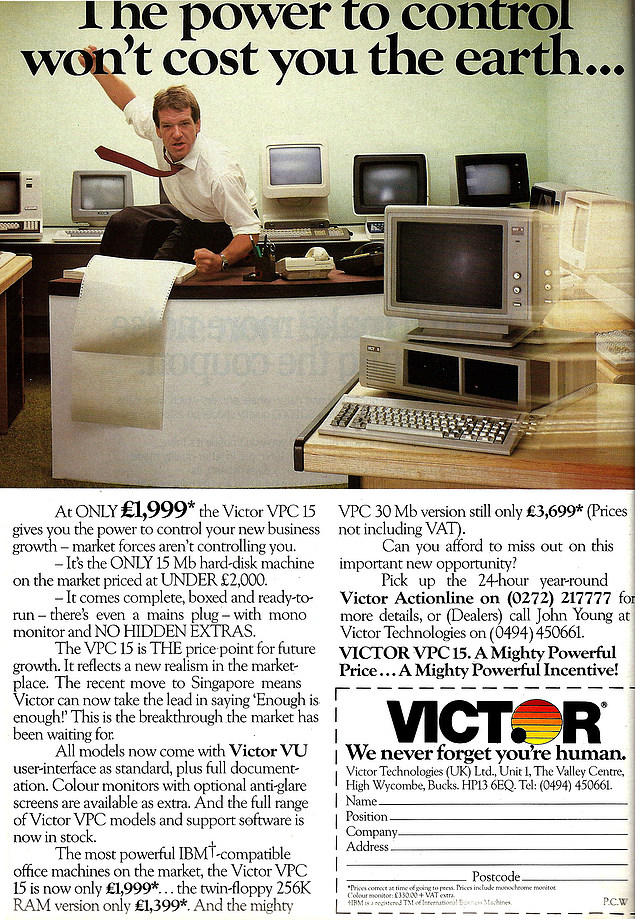 Victor: The power to control won't cost you the Earth

Victor had been a large American calculator seller, but was in financial trouble when Chuck Peddle, designer of the 6502 processor and once of Commodore, bailed it out so it could become the OEM manufacturer of his new Victor 9000 computer - otherwise known in Europe as the Sirius 1. Sirius, which had been co-founded by former Commodore financier Chris Fish, went through several transformations, where it wasn't always clear which company was in charge of what and who was reselling whom. It all ended up with Sirius buying back the Victor name at the end of 1982 - incorporating its previous logo in to the "o" of Victor - but the company found itself in Chapter 11 by the end of 1984[1]. After it exited Chapter 11, by which time Peddle had moved to Tandon, another IBM clone manufacturer, the company went on to produce its own inevitable Singapore-manufactured IBM clone - the VPC 15.

The VPC 15 retailed for £1,999, or around £6,270 in 2021 money. Note how the dude in the advert looks like a cross between Bill Bixby as David Banner out of the 1980s TV series The Incredible Hulk and also Lou Ferigno as the Hulk in the same series.

By the late summer of 1988, Peddle, who had been Tandon's president, had moved on to become "adviser and consultant" to the chief executive Sirjan Lal Tandon. This appeared to be a relief to the staff of Tandon as Peddle had a reputation - not unlike that of Chris Curry of Acorn - of insisting that nothing was done unless he did it himself. Tandon had been trying to release a pioneering removable hard disk unit, but it had been delayed whilst it was beta-tested to ensure that it really did work with all the 286 and 386 machines on the market - testing that, according to Guy Kewney of Personal Computer World, should have been done the year before. It was this sort of delay that prompted Peddle's move sideways, away from day-to-day management to the sort of strategic thinking he was considered much better at. There was however some nervousness that Peddle might take it the wrong way, as having started several companies already he might think nothing of jumping ship again to start again[2].

Shortly after Victor's exit from Chapter 11, its remains were purchased by Datatronic of Sweden. The European half of the operation actually managed to survive, with a bouyant PC market in 1988 allowing the company to grow. Meanwhile, in the spring of '88, Digital Equipment (DEC) entered the PC clone market when it started selling re-badged Tandy 286 and 386 machines. However, for the European market it picked Olivetti instead, as Tandy's offerings didn't seem suitable, and even if they had been, Tandy had no real European presence to back them up.

Seeing a missed opportunity, Tandy made a move to buy out Victor/Datatronic, although the deal - which Tandy sold to the press, somewhat insensitively, as merely a way of getting a European office - was subject to the approval of the Swedish government. Writing about the move in Personal Computer World, Guy Kewney suggested that the success, or otherwise, of the deal would hinge upon whether Tandy decided to ruin everything by replacing Victor's management with its own, or whether it would leave the incumbent Ulf Eriksson as president of the reasonably successful company[3].