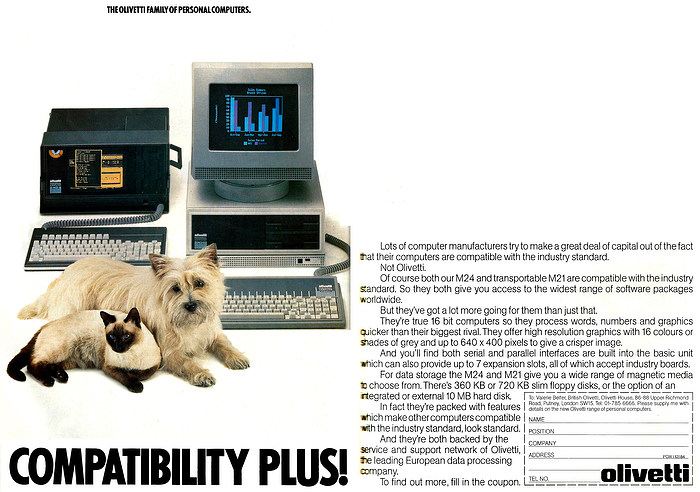 Along with almost every major manufacturer of the time, Olivetti was not one to refuse a spot on the bandwagon that was the IBM PC format, here offering an 8086 "true 16 bit" PC clone, although with a twist in the "transportable" M21 model - a luggable rather than a portable, in the style of the KayPro or the IMSAI PCS-80/30 from 1978.

Billed here as "the leading European data-processing company", Olivetti would provide perhaps its longest-lasting contribution to the computer industry by bailing out struggling Acorn Computers in the following year, allowing Acorn to finance research-and-development of its Reduced Instruction Set Computing chip which first saw light of day in Acorn's Archimedes machine, launched in 1987.

This was despite rumours in the press that Olivetti wanted to close down Acorn and run the RISC project itself[1]). It didn't, and eventually Acorn spun off its RISC processor to create a company called Acorn RISC Machines, or ARM - a company which is not exactly famous but whose core chip design powers most of the billions of phones and tablets in the world. 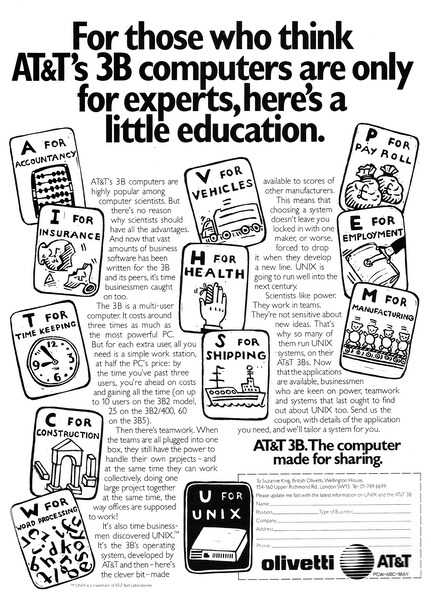 Joint AT&T/Olivetti advert for the Unix 3B © Personal Computer World 1986At the end of 1984, Olivetti appointed a new press agency to "handle a campaign in which Olivetti's M24 and M21 micros will compete agressively against the IBM PC".

The new press agency immediately proclaimed that Olivetti had "won the battle hands down against the IBM", with the agency's Tim Wickes stating "Olivetti has no option but to go for the throat".

Wickes continued "IBM's dominance of the PC market has little to do with technology and lots to do with marketing. One look at the products and you can see that Olivetti has won any technical battle hands down. Now it's gloves off in the marketing arena".

Guy Kewney, reporting on this advertising insurgance, commented drily that "I do hope nobody gets trampled in the panic inside IBM HQ"[2].

By the summer of 1985, Olivetti - which by now was 25% owned by AT&T of the US - was selling its AT&T's 32-bit 3B2 machine in Europe in exchange for AT&T selling Olivetti's M24 in the States. AT&T's interest in Olivetti came about because the American company wanted a quick way to get into Europe, and Olivetti already had an extensive presence and dealer network.

The 3B2 was touted as a Unix machine, which was handy as AT&T was the owner of Unix, or as a local-area network controller/file server, but there was some concern over whether AT&T could both "command the Unix hardware market" as well as sell its Unix to other rival hardware manufacturers.

AT&T also tried to take on IBM when it released its PC6300, but the company's James Edwards ended up acknowledging this as a tactical error when he said "we decided that going head-to-head with IBM was stupid"[3]. Meanwhile, the word from the US was that the M24 had flopped, although Olivetti itself was saying that the machine had done much better than forecast. However, in Europe the M24 was looking like it might actually be the number one rival to IBM's original 5150 PC[4].