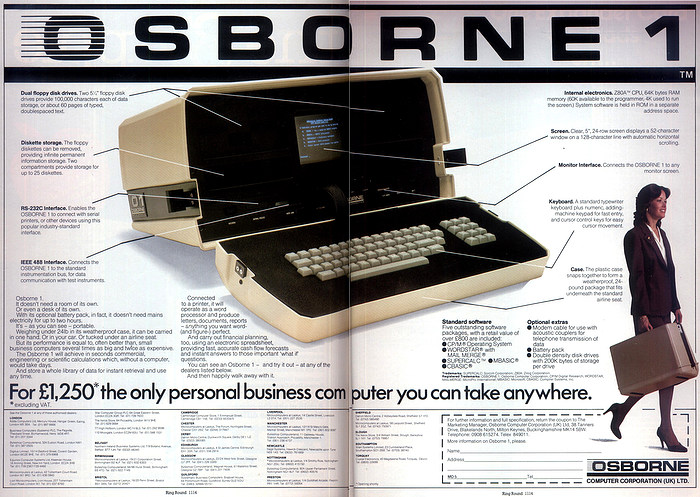 Osborne 1: The only personal business computer you can take anywhere

The Osborne 1, launched at the West Coast Computer Fair in March 1981 (with the first machine shipping in July), is often credited as being the first computer designed specifically to be portable, despite its 11kg weight - or as portable as a suitcase full of bricks, as it was often said. Even so, it owes a big tip of the hat to earlier machines like 1978's luggable-looking IMSAI PCS-80/30 as well as range of prototypes built by Xerox PARC called the NoteTaker[1]. The company - taking on as it was established rivals such as Commodore, Tandy and Apple - was one of the few of the new-breed of start-up microcomputer companies to be immediately successful, an achievement even more impressive as its one-and-only product was a form-factor that had largely dismissed by a sceptical industry as almost-entirely unneccesary. Osborne sold its first machine in the summer of 1981 but within a year its turnover was about $100 million and it was churning out 500 units a day.

The machine itself was Z80A-based and had 60K of available memory. The other 4K of the conventional 64K block was taken by the display, which was a 5" CRT that could display 52 characters (of 128 available on each horizontally-scrolling line) by 24 rows. It also had dual 5.25" floppy drives with a combined capacity of 200K. Priced at about £1,400 (including VAT), or around £5,860 in 2022 money, it came with an advertised "£800 worth of free software" including CP/M, WordStar, SuperCalc - a clone of Visicalc that Osborne commissioned software house Sorcim to write for it - and a couple of versions of BASIC. Osborne wasn't too fussed about software, and in contrast with many other micro companies didn't develop any of its own - of its staff of around 350, less than a dozen were programmers, and these were integration and diagnostic specialists. One of Osborne's favourite sayings about software was "Adequacy is sufficient, everything else is irrelevant"[2]. 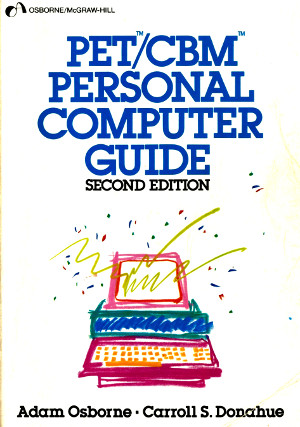 The second edition of Adam Osborne's PET Personal Computer GuideTowards the end of 1983, Osborne ran a promotion which claimed that the price of the Osborne 1 was at "Sinclair Spectrum level". This ruse was down to a bundle costing £1,495 (£5,150 in 2022 money) containing "£1,400-worth of software", so therefore the machine only cost £95. The software bundle was the same as the original offering plus "Personal Pearl" and the Peachtree Business Management system. There was also a hard-disk system, which included a Trantor TSL-5 5MB disk on sale for £2,995 (£10,300). This sales drive was no doubt in part due to the early announcement of a new model, the "Osborne Executive", which caused sales of the Osborne 1 to slump enough so that the company had to close a manufacturing plant in New Jersey[3]. This was the essence of an effect that had already blighted Nascom and many other companies and is somewhat unfairly known as the "Osborne effect", as although the pre-announcement of the Executive did cause problems, it didn't actually cause the immediate downfall of Osborne, which limped on through to 1984.

The company that actually holds the honour of first causing itself major problems by anouncing something that didn't exist yet was North Star[4], maker of 1977's Horizon S100-based micro, although similarly the company wasn't actually bankrupted by its mis-timed announcement and was still going at least in 1982. In a nod to that particular failure, Adam Osborne was to be seen at the 5th West Coast Computer Faire in San Franciso in 1980 presenting - in an abrasive style that annoyed Personal Computer World's correspondent David Tebbutt - his "white elephant" awards. The awards - which were made out of a North Star micro board with an engraved brass plate stuck on it - were handed out to companies like Intel and Zilog as well as the developers of Visicalc, whose particular award recognised "the beauty of design and timeliness of the product". After the show, Osborne took Tebbutt's fellow Personal Computer World correspondant Guy Kewney out on San Francisco Bay for a potter around on his yacht. Apparently, the yacht was failing to make any headway as the gears on its inboard motor had stripped. Putting the yacht under sail, Osborne took the helm and promptly stranded it on a sandbank. Osborne followed this up by managing to destroy an important button on the yacht's radio, so the pair were reduced to waving down passing boats for rescue[5]. 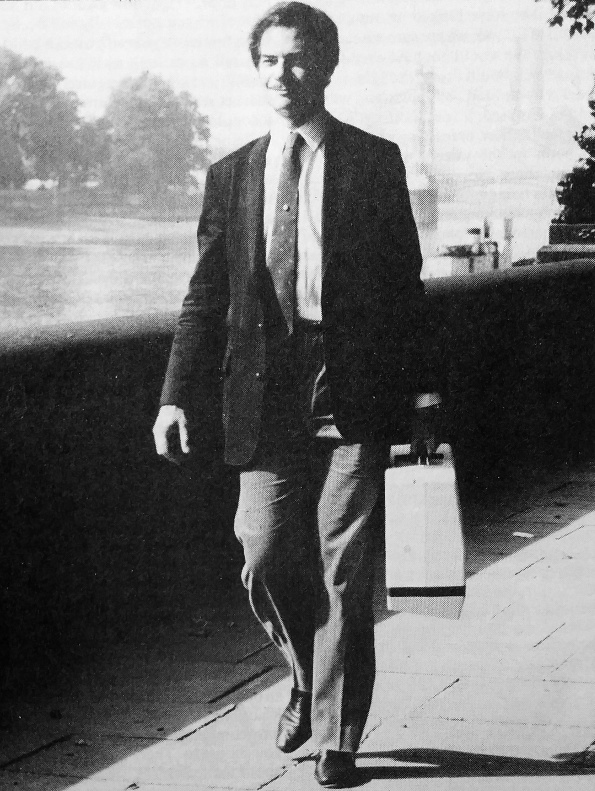 Adam Osborne - looking a lot like Timothy Dalton carrying a sewing machine - on a visit to London, complete with Osborne 1. © Practical Computing, January 1983Osborne had been born in Bangkok to British parents, and spent his early childhood in Thailand and India before being sent to grammar school in England, which was followed up with a degree at Birmingham University. After doing a PhD in chemical engineering the US, he stayed on and set up Osborne Associates, a company specialising in software support and technical writing, in 1970. The 1975 publication of Osborne's "Introduction to Microcomputers" launched a new career as an "influential columnist" in newspapers and magazines, at one point using his "From the Fountainhead" column to expose fraud in the microcomputer kit industry, where purchasers were sold dodgy components as part of a kit which they would assume they had damaged during assembly. Money from the eventual sale of Osborne Associates to publishers McGraw-Hill in 1979 provided the funds to set up Osborne Computer Corporation, and the first result was the shipping of the Osborne 1 in June 1981.

His belief about Osborne was that technical innovation was less important than building a strong business, a view reflected in his unusual attitude towards copy-cats, given that Osborne as first entrant had created this new "luggable" market. He observed that "I have and I am being copied and I should be. The more I am copied that more people say this is a legitimate market that we should pay a lot of attention to. I don't expect to keep 100% of this market". This was a surprising view entirely at odds with, for example, Apple, which after a short phase supporting clone manufacturers until its own Apple II got popular/profitable enough, ended up litigating against anything that even thought about infringing it. He concluded of the copying competition that "it is just up to us to market better, distribute better, and manufacture more cheaply, which I think we can do". There was clearly a limit though to just how far Osborne would go to be better, as it was said that one of the company's approaches was to satisfy 90% of users' needs rather than coming unstuck trying to reach 100%.

Even though Osborne saw that the micro market needed to move away from one where computers were designed for computer people by other computer people to one targetting "Mr. Joe in the street", he was not really interested in the home-micro end of the market, but suggested a company that he thought could succeed. That company was Sinclair, as Osborne appeared to be an admirer of Uncle Clive and professed bewilderment for the way that Sinclair had been treated in the UK. "I have a deep respect for Clive. I think that the British Establishment has been unbelievably naïve and incredibly studid in the way it has treated the man. The lot of them have less sense than Clive Sinclair has in his small finger". He continued "If they would pay a little bit more attention to the few such people who are around [in the UK] and a lot less attention to disasters like Inmos, [the UK] would be in far better shape in the microcomputer world".

In the same interview in Practical Computing, Osborne veered off into a bit of wider future-gazing, where he suggested that the world was moving away from a cycle of democracy into a new autocratic era of stability where nothing changed. He posited that "people will rebel against technology. They will accept what exists but they will accept nothing new, and there will be no more technical innovation. People will shun democracy for autocracy. They will once again accept Lords, Barons and corporate dictators because that is the price of stability"[6]. 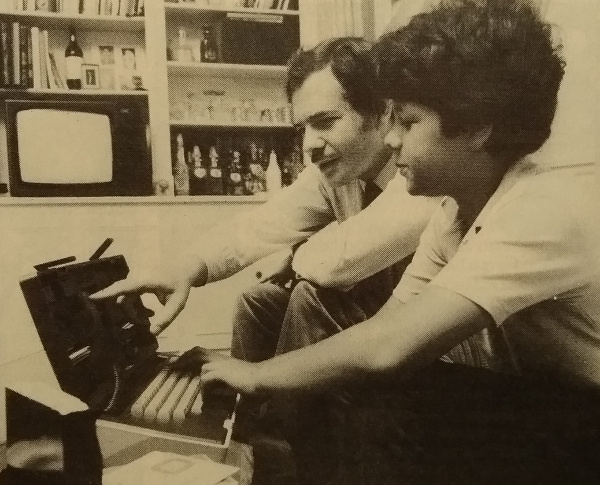 Adam Osborne with son Paul and an Osborne 1. © Practical Computing, January 1983Dr. Osborne revealed some more of his business and marketing beliefs at the 1983 annual meeting of the British Osborne Owners Group Information Exchange (BOOGIE) at the Cavendish Conference Centre in London, where he was speaking. He revealed that the amount of effort he put in to running the company meant that "[he was] more likely to die of sunstroke than a heart attack". He also stated his simple business philosophy - "if people have heard of a product, they'll buy it". He was also a fan of self-starting, as when he couldn't get his "Introduction to Micromputers" book published he simply financed it himself, and went on to sell the entire 10,000 print run in three months[7]. Although Osborne was also sometimes credited with authoring books he didn't actually write, including what was expected to be Autumn 1983's best seller - "The Computer-Hater's Handbook"[8], one of his actual books, "Some Common BASIC Programs", had been turned in to a cassette of software by ACT's software subsidiary Petsoft in 1979 and sold for £15 (£84 in 2022)[9]. ACT went on to import Chuck Peddle's Victor 9000 - Peddle being the designer of the 6502 processor and the inspiration for the Commodore PET.

The Osborne 1 was based on the premise, as Osborne himself said, that "We do not need the abundance of more powerful, more expensive microcomputers which the industry has been producing. We need a microcomputer with the capabilities of existing products but with a much lower price tag. We need a portable microcomputer capable of performing a large number of straightforward tasks, using industry-standard operating systems and programming languages"[10]. Its design was also informed by the fact that it should fit under an aeroplane seat.