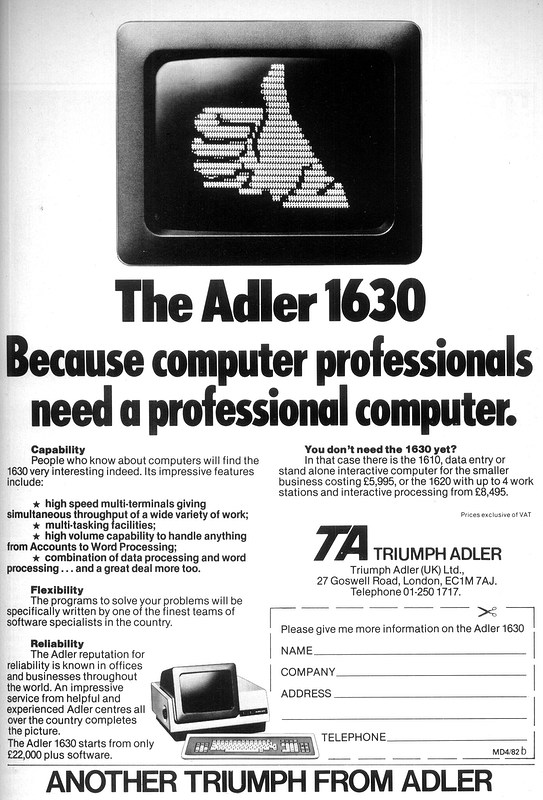 According to Google, this computer doesn't seem to exist - at least there doesn't seem to be any information on it. Old Computers.com mentions one of the company's other machines - the Alphatronic - and, in passing, suggests that Triumph-Adler was not particularly successful as a computer company. It also has a reference to the TA-1600, although it says that that machine wasn't released until 1983. It's interesting therefore to draw a comparison with Commodore, as both Commodore and Triumph-Adler (a German company originally, before it was bought by the US Royal Typewriter Co. in 1969) were originally manufacturers of typewriters - the Triumph part of the merged T/A company had even produced mechnical calcuators, as did Commodore. But there the similarities end, as despite a modest run of success when the company was producing machines that competed with IBM's mighty Systems /34 and /36, their computers seemed to disappear without trace, unlike Commodore, who were the company that had launched the world's first true personal computer in 1977 and who continued to influence the computer industry up until the end of the 80s (they survived up until 1994, but the late-80s Amiga was their last real hurrah). In 1979, Volkswagen, somewhat improbably, purchased a majority stake in the Triumph/Royal typewriter group and in 1986 they were sold on to Italian typewriter/computer company Olivetti - the same company that rescued Acorn from its financial difficulties at about the same time. Wikipedia has more on Triumph-Adler's history. The advert itself refers to the 1630 system, which seems to be one of the popular-at-the-time micro systems whose job was to run a bunch of terminals (like the RAIR Business Computer or perhaps ICL's DRS 200). It was unusual in seeming to offer only customised software that would be "specifically written by one of the finest teams of software specialists in the country". The starting price of £25,300 (including VAT) is a not-inconsiderable £110,000 in 2012 money (and that's without any sofware). Perhaps it's no wonder it didn't seem to do that well.