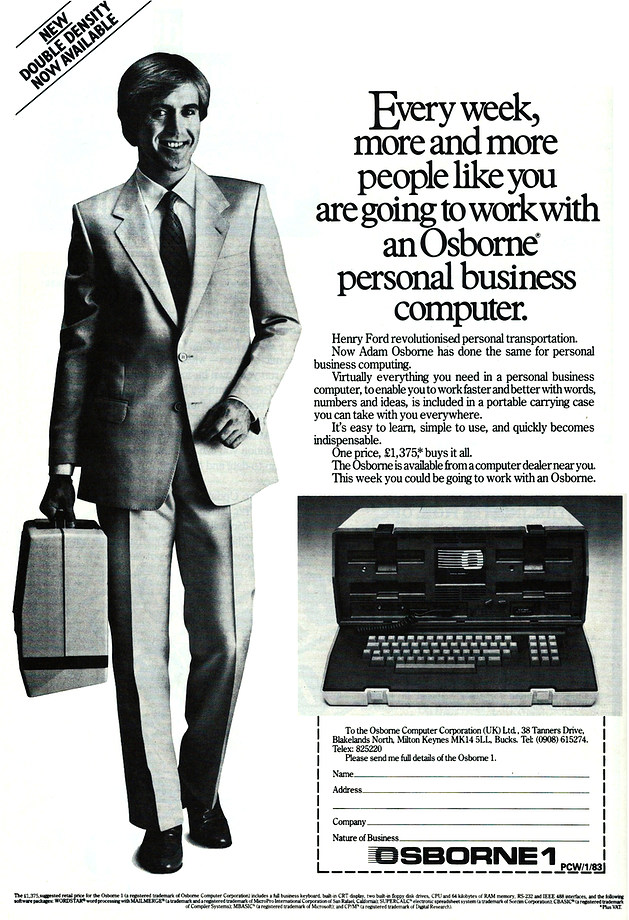 Every week, more and more people like you are going to work with an Osborne personal business computer

The Osborne One, designed by Lee Felsenstein, who had designed Processor Technology's Sol computer back in 1976, went through hard times during 1983, not least when the early announcement of the follow-up model - the IBM-compatible Executive - caused something a sales slump of the existing machine which eventually led to the closure of a manufacturing plant in New Jersey[1]. Causing financial problems for your company by announcing better new products which weren't actually ready came to be inaccurately known as the "Osborne Effect", to which normally gets added an assumption of bankruptcy. Osborne actually survived - just - but at the end of 1983 it announced that the UK part of the company would take on all marketing and distribution and an independent company would now be handling manufacture. When the company finally collapsed, Adam Osborne in his book "Hypergrowth" credited the failure of the company to his own executives[2] for spending $2 million trying to make use of $150k of old Osborne 1 parts[3].

In the new year of 1984, the Osborne underwent a re-launch campaign in the UK, with the price of the machine - plus its regular stash of bundled software - being dropped from its 1982 price of £1,400 to under £1,000 (about £3,290 in 2022), together with a promise to upgrade later on to the Executive model. In addition, any user who signed up for the British Osborne Owners' Group (BOOG) would get a further 10% discount on products[4]. The UK business was a separate entity to that of its parent and the Osborne One was at the time the only readily-available portable, as machines from its competitors Kaypro and Compaq, which had already made inroads into Osborne's sales in the US, were not yet shipping in significant numbers in the UK. The rise of the competition was yet another reason given for Osborne US's failure, with Personal Computer News suggesting in September 1983 that "Adam Osborne took too long to announce the successor to the Osborne 1, giving other companies a chance to slip in and take a bit of the market".

Despite the re-launch, BOOG's John Anglesea seemed to think that Osborne UK was already toast, saying "Of course we feel very sad, but now we see ourselves as the only support for the Osborne 1. People that are worried and feel that they've been left in the lurch can come to us. We will be able to act as a substitue for Osborne but we can't do anything about guarantees". Osborne UK's Mike Healy however seemed to be more confident in the future, stating "We will still continue to trade as we have secure stocks and there's still a lot of demand for the Osborne 1"[5]. 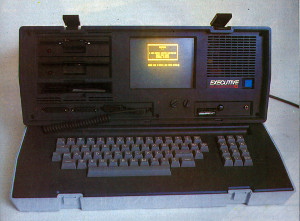 The Osborne Executive - unfairly blamed for the eventual collapse of the company. © Personal Computer World 1983When Osborne US collapsed at the end of 1983, it had debts of more than $41 million (about £88 million in 2022) and underwent a bankruptcy reorganisation under Chapter 11. The reorganisation and later mostly-UK re-launch was possible because Ron Brown, head of international operations, had persuaded Osborne's various creditors that keeping the company going would be better than selling off its assets. The creditors were paid off in stock with some additional financing being provided by three banks, whilst current president Robert Jaunich, a former president of Consolidated Foods, and chairman Adam Osborne were relegated to plain directors[6]. The re-organisation was not without incident as a group of venture capital companies filed a fraud suit against Osborne in California in an attempt to stop the company drawing on $7 million of the credit they were underwriting. The court threw the case out when it learned that the letters of credit had been redeemed[7].

Speaking of Jaunich and Osborne's problems, Osborne had said "my mistake was simple, the one thing I should not have done was to step down as president of the company and hand over to Jaunich. Jaunich was trying to step back and get a look at decisions which were already overdue when he was asked to make them, and things were just not getting done"[8].

There was of course some collateral damage from all this, with Personal Computer News reporting on a Barnet-based company called Levell Electronics which had unfortunately chosen the week that Osborne collapsed to trumpet the fact that it had just been appointed main dealers by "the go-ahead Osborne Computer Corporation". The press release concluded that "Reliability is a key factor when you have a computer and Levell Electronics chose to market Osborne Computers only after they assured themselves that these products were reliable". Personal Computer News drily observed "Ah well. Nice machine, shame about the company"[9]. Also affected was Osborne's US workforce, which went from 1,000 to around 80 over the summer. Mike Healy, MD of Osborne UK said at the time that it was "very likely" that production would cease in the US and that "the days of computer firms. or at least micro firms, employing a thousand people may be over"[10].

Adam Osborne continued the blame game when discussing the launch of his new venture-capital fund, called Software Seed Capital Corp, at the beginning of 1984. Osborne, as CEO and chairman, was promising to invest $10 to $15 million in start-ups with, it was hoped, up to 60 being launched in the first year. He said of the Osborne Computer crisis that "with the damage done from March to September [1983] there's really nothing left of the company I created. There's really not much point in me going in to pick up the pieces. [It was a] totally unneccesary tragedy. [It] went down the tubes when I bought someone else in to run it"[11].

Osborne's book, Hypergrowth, was - according to Personal Computer World - an expensive piece of research which attempted to show that Jaunich, which Osborne had hired at a salary of $1 million per year (about £1.8 million in 2015), had actually engineered the collapse of Osborne. However, evidence presented to the post-mortem bankruptcy enquiry appear to cast doubt on Osborne's original theories. Osborne said "two bits of evidence which led me to suppose that Jaunich was the instigator of some of the strange events are not evidence pointing to Jaunich at all. It seems that one was a letter from financial backers, which he was obliged to sign, and the other was something he had nothing to do with". The book also appeared to give some room for interpretation, saying that if Jaunich was not deliberately acting out of malice, then he must have been "incredibly stupid". Once malice had apparently been ruled out, Osborne would not reveal any further his exact opinion of Jaunich's stupidity. Despite the public change of heart, John Dvorak, co-author of Hypergrowth, suggested that there had almost certainly been a "mega lawsuit in the pipeline"[12].

Meanwhile, the new Osborne Executive - the machine that had caused some of the problem in the first place - had actually been launched and there was also talk of a future machine known as Vixen, which was intended to be a "much more portable version of the One". Despite all of that, the company never regained its position or success and faded away - perhaps there was just too much competition around, from the likes of IBM, Sirius, Apricot, Sage and Apple.

Lee Felsenstein popped up again in 1988 with the launch of his new machine - an 80386-based micro with a particularly high-resolution screen which was mapped using PostScript, rather than the usual bitmapping. This meant that whatever was on the screen could be dumped to a printer and truly be WYSIWYG. Felsenstein's company - Upstart Corporation, which also counted Arvind Patel of Paradise Systems and John Simpson, formerly of DEC and Burroughs, as founders - was suggesting that its new machine, the Nomax, would attract "a large number of PC users who are reluctant to buy a Macintosh but who want the benefit of Mac-like features and performance on theirn desktop publishing systems"[13].